One Day Delhi Tour by Walking ,..

In Golden Triangle Tour with Tiger Safari, you will considering the most popular route in the country with covering three royal cities along with three historical places and 3 India's most famous National Parks. In this package you will cover Delhi, Agra, Jaipur, Bandhavgarh National Park, Kanha National Park and Ranthambore Wildlife Park. Come aboard this fascinating voyage with Golden Triangle Tour with Tiger Safari that is sure to leave you mesmerized and wanting for more. At the end of your journey, you will come back to Delhi and head towards airport for your departure. 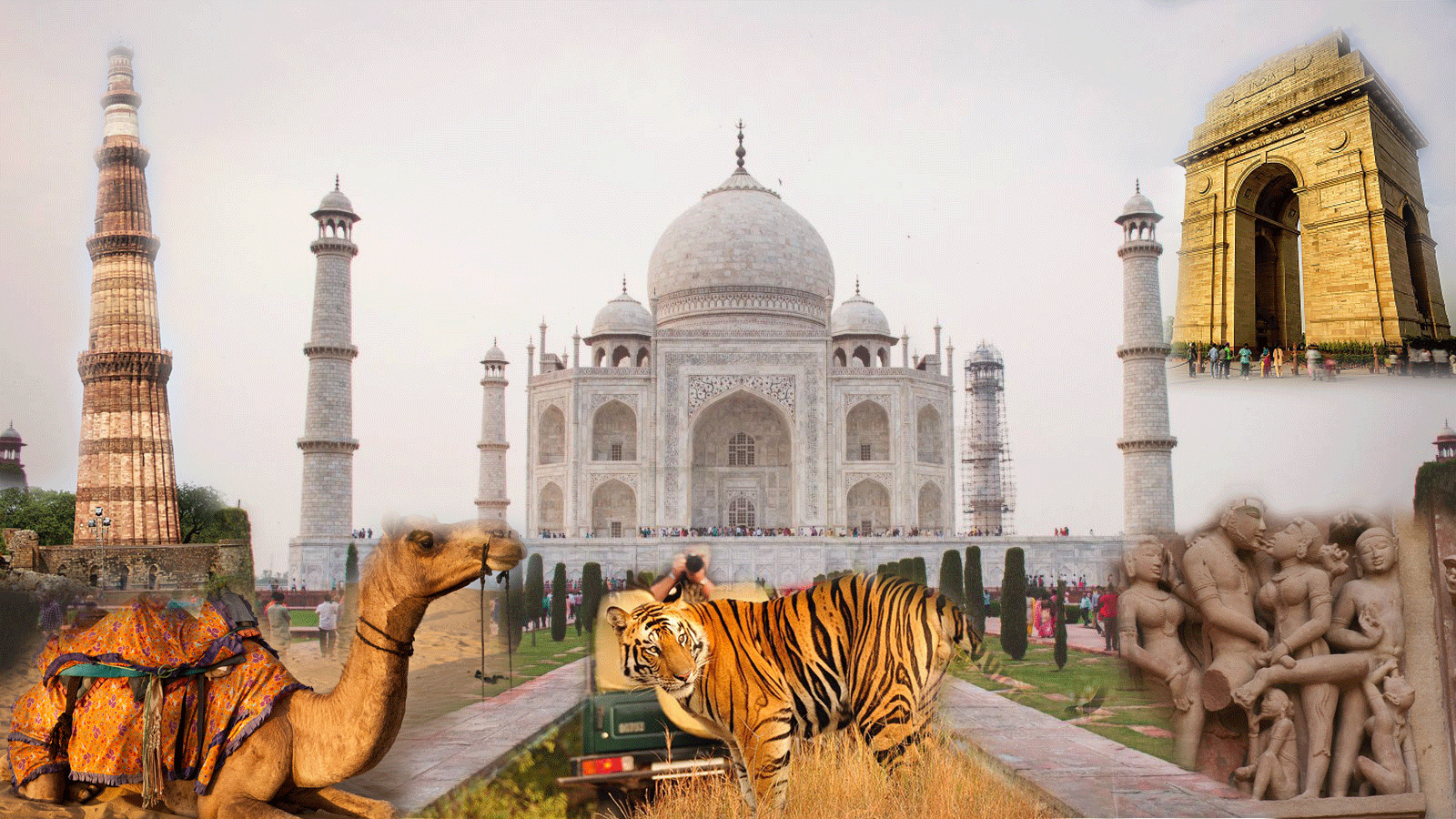 After arrival at Delhi international Airport, Indian Wildlife Tourism representative will greet and transfer you to the hotel. Freshen up and have dinner. Free to relax in the evening. Enjoy the welcome dinner and stay overnight at hotel.

Return to hotel, have dinner and stay overnight at hotel.

After breakfast drive to Jaipur. Upon arrival check in at hotel and freshen up. Later, proceed for the excursion of Amber fort. Enjoy the elephant safari here that gives you an amazing experience.

Return to hotel, have dinner and rest overnight at Jaipur.

Have dinner and relax overnight at hotel.

After breakfast move forward to explore amazing Ranthambore wildlife sanctuary. The sanctuary is well-liked for the royal tigers. Also explore the other wild animals like: Leopard, Nilgai, Sloth Bear, Wild Boar, Dhole, Sambar and many more. There are number of plants, birds, reptiles, etc. in the sanctuary that will make your journey astonishing. Back to hotel, have dinner and rest overnight at hotel.

Have breakfast after that again proceed towards Ranthambore National Park to enjoy the Elephant safari. Also experience some adventurous sports like rappelling, trekking, nature walk, jeep safari, etc. After that, explore the popular attractions of the park like: Ranthambore Fort, Padam Talao, etc.

Have dinner and stay overnight at hotel.

Have breakfast after that drive towards Bharatpur Bird Sanctuary. After arrival check in at hotel and freshen up. Later, move forward to explore the variety of beautiful birds in the sanctuary. Also visit the other attractions of Bharatpur like Ganga Mandir, Bharatpur Palace, Laxman Mandir, etc.

Have dinner and overnight stay will be at hotel.

After having breakfast proceed for your next destination i.e. Agra, en-route visit Fatehpur Sikri. Upon arrival check in at hotel and get freshen up. Later, move forward to visit the major attractions of Agra i.e. “Taj Mahal” one of the wonder from the Seven Wonders of the World and “Agra Fort”.

Enjoy dinner and relax overnight at the hotel.

After having breakfast proceed to Gwalior and visit Gwalior fort, which is one of the largest forts in India. Seek blessing at Vishnu temple which was built long back in the 11th century. Have a comfortable stay at the hotel at night.

After breakfast leave for Khajuraho which 285 kms from Gwalior. Upon arrival checkin to hotel and rest of the day free at your leisure.

Today after breakfast, pay a visit to the Western Group which has 14 temples including Kandariya Mahadeo, Lakshmana, chaunsath Yogini, Parvati, Varaha, Vishvanath and Nandi, Chitragupta, and Devi Jagdamba. End the day with a comfortable stay at a hotel in Khajuraho.

After hearty breakfast proceed to explore the lush greenery of Bandhavgarh National Park. You will explore the morning Tigers Jungle safari here which start by 6:30am till 10:30 am. It has the utmost density of tiger population in India. You will also capture the other animals in camera like Chausingha, Chital, Chinkara, Nilgai, Indian Bison, Sloth Bear, Leopard, Porcupine, Wild Boar, Sambhar, Spotted Deer, etc. Return to hotel, rest of the day free at your leisure and enjoy dinner with overnight stay at hotel.

Have relaxed breakfast at the hotel and move forward towards the Bandhavgarh national park for lots more enjoyment. On this day, take pleasure of elephant ride for thrilling experience. Later also enjoy the jeep safari.

Return to hotel, have dinner and overnight stay will be at hotel.

After breakfast drive towards Kanha Tiger Reserve. Upon arrival check in at hotel and relax. In the evening proceed for the amazing jeep safari in the park which starts by 2:30 pm and ends by 5:30pm. Back to hotel, enjoy dinner and rest overnight at hotel.

Have breakfast after that proceed to explore Kanha national park. It is one of the preeminent tiger reserve. Explore the tigers as well as other wild animals like: leopard, striped hyena, jungle cat, sloth bear, spotted dear, wild boar, jackal and a variety of monkeys. There is wide variety of birds spotted in the park. Later, have dinner and stay overnight at hotel.

After breakfast enjoy the morning jeep safari in the park. Later, in the afternoon drive to Jabalpur and after arrival take a train for Delhi. Dinner and overnight will be on train

Have breakfast after arrival at Delhi from Jabalpur. Later, Indian Wildlife Tourism representative will transfer you to Delhi International Airport on time to catch the flight for your onward destination.

India has always been a fete for wildlife enthusiasts from around the world with its fascinating myriad of flora and fauna that has remained both unique and mysterious for nature lovers. The variegated wildlife species can be seen in over 80 national parks, 440 wildlife sanctuaries and 23 tiger reserves set up by the Government of India in a bid to preserve this vital resource.

Embark on the Epic Journey of India, Peep through the Mughal Jharokhas, admire the iconic Mughal destinations of Delhi Sultanat, The Taj Mahal  In Agra and Proud Rajputana in Jaipur. Delhi Agra Jaipur is called the Golden Traingle Route of India. It is one of the best and most visited Hostorical Routes.

www.holidaytravel.co provides the best tour packages for Delhi Agra Jaipur Golden Triangle Packages. Below are our most successful tour packages.

India ranks ninth in the world for the number of animal species (over 400), and also has 12 percent (approx.) of the planet’s birdlife. Indian Wildlife Safaris still offers one of the best chances on earth to get up close with wildlife in the natural habitat. In India, one is constantly surrounded by animals the Hindu faith worships creatures like the elephant, the monkey, the bull and the peacock but Indian wildlife known for Bengal Tigers.

To enjoy great safaris in Ranthambore through elephant, jeep or canter; the tourists must be familiarize with its perfect timings so they would get the maximum leverage of safari fun completely. For the information, safari in Ranthambore can be experienced through different accessible zones and the timings for it vary in summers and in winters.

India has a very rich and diverse wildlife. From the mammoth mountain ranges in the north, the marshy lands in the east, to the tip of Kanyakumari in the south, India is home to a number of Wildlife conservation parks and sanctuaries. Here’s a list of best National Park In India For Safari :-

Kanha National Park has the alluring features to captivate many visitors round the corners out of which the varieties of wild lives make the whole environs more blissful. The major faunas to be found in the vast serenity of the Kanha National Park are:

When you look at the locations of tiger reserves in India, still the best place to see tigers in terms of sightings and safari backup, they spread out in a line from the north to the south of the country. Please find the list of national parks where you can see tigers

A night jungle safari in India is an adventure of a kind and we at Holiday Travel India provide for you this night safari to be up close with nature at the hours of the dark. Twinkling of their eyes, to the sounds of their movement and the royal tigers roar would surely give you goose bumps for a lifetime.

Night Jungle Safari in Bandhavgarh National Park:- To experience the wilderness of the Bandhavgarh Forest under a star lit sky with moon shining bright and the roars and cries of the jungle inhabitants being heard all around, is an experience one would not like to miss.  The night safari in Bandhavgarh will be in open traditional jeep with specialized guides who would take care of your security and along with that enlighten you with their knowledge of the vast jungle and its fauna. Your security and comfort is our priority and we take care of all of that with quick medical aid, guides and guards and we leave no stone unturned to give you that mind blowing and hair raising experience.

Night Jungle Safari in Kanha National Park:- Kanha national park in central India is starting Night Safaris in the buffer zone. Only time will tell if this is a good, bad or an ugly decision. Let us not jump the gun in ridiculing the step, neither let us support it with closed eyes, let us try and understand the pros and cons of starting Night Safaris in Kanha. This has been tried in Satpura and Pench National Parks already, and now being brought to Kanha.