On arrival at Bhopal airport, you will be picked up and check in to the hotel, rest for a while and leave for a sightseeing tour to visit the tourist attractions of the capital city of Madhya Pradesh. Visit the Laxmi Narayan Temple, Taj-ul Masjid, Shaukat Mahal, National Museum of Mankind and by the evening visit the upper and Lower Lakes.

After that return to the hotel and enjoy a comfortable overnight stay at your hotel.

After breakfast proceed to see unfinished temples of Bhojpur and see Highet Shivling in Bhojpur, spend some time on the river bank and proceed to Sanchi, Witness one of the oldest stupas of India, Sanchi Stupa which was built 2000 years ago.

Return to your hotel in the afternoon, freshen up and then leave for bhopal sightseeing i.e. Sadar Manzil, Moti Masjid, the Upper and Lower Lakes.

Stay overnight at the hotel.

After breakfast checkout from hotel and proceed for Satpura Tiger Reserve which is situated 180 kms from bhopal. You will reach by noon and have a lunch. Evening Boat Safari on River Denwa. Overnight at Satpura National Park

Early morning our representative will take you to Jungle for safari which will start by 6:00 am. This safari held till 10:30 am then drop you to resort.

After breakfast rest of the day free at your leisure or you may go for Jungle walk nearby your resort. Overnight stay Satpura

Jungle Safari Just like any other national parks of Madhya Pradesh, Jungle Safari system of Satpura National Park is similar as per rules of Madhya Pradesh Forest Department. Here 4-wheel driven vehicles (petrol/diesel) are used to park-safari. Here no vehicle of more that 5-years old is allowed to go for park-safari. Using that entrance ticket, cross the Denva river and from other end, take jeep for park safari. In Satpura National Park, one can do walking safari also.

Post breakfast and you will proceed for Bhedaghat and Checkin to hotel then visit dhuadhar Waterfall, here you can enjoy ropeway ride above the waterfall and also enjoy boating at bhedaghat In the evening you will back to hotel and Overnight at Bhedaghat.

Dhuandhar (Niagra Falls of India) : It is a waterfall in adjoining part of Bhedaghat. It has a great force of water flow and a very photogenic spot. Here Narmada river passes through narrow passage and produces fog and sound. Dhuandhar can also be viewed from overview thorough rope-way drive. One can also do shopping of marble show-pieces in Dhaundhar local market.

Bhedaghat or Bheraghat : Most popular site attraction of Jabalpur city is Bhedaghat. It is 25 km away from main city and is a must visit spot for tourists visiting Jabalpur, Madhya Pradesh. Here one can enjoy boating in Bhedaghat on Narmada river in between gleaming marble rocks. Many bollywood movies has been shooted here like Ashoka, Jis Desh Me Ganga Behti Hai etc.

Today you will proceed for Bandhavgarh National Park which is known for the Royal Bengal Tigers. The density of the Tiger population at Bandhavgarh is the highest known in India. Checkin to resort and have delicious lunch with veg and non veg dishes. Rest of the day free at your leisure or you may go for Bird watching (optional) and enjoy the day. Overnight stay at Bandhavgarh

Today early morning get ready for Jungle safari and gypsy will pick you from your leisure by 6 am. In the morning you will go for Jungle safari in Tala Zone which is one of the biggest tiger reserve zone of Bandhavgarh. Enjoy the safari till 10:30am and get back to resort for breakfast. After that you may enjoy at your leisure till lunch time.

After lunch you will go for evening jungle safari which will start by 2:30 pm and enjoy safari till 5:30 pm. After that you will drop to resort for overnight stay.

Early morning after breakfast you will proceed for Kanha National Park which is one of the biggest tiger reserves of India and the largest national park of Madhya Pradesh state in India. After you reach kanha National Park and checkin to resort. After some rest, have some delicious lunch with veg & non veg cuisines.

Your will get awake with an early morning wake call at 4:30 AM. Time to leave for the Gypsy Safari by 5:30 AM with a target to reach the gates by 6:00 AM. You will be served with a cup of tea before departure for your first jungle safari to the Kanha national park. The morning safari has a unique charm and ensures goof sitings of animals as well as fresh jungle life flora and fauna. Breakfast will be served at 9:00 AM in the Jungle Camp, followed by another round of tour till 11:00 AM. After morning safari return to the resort for rest and Lunch..

After lunch we will again depart on Afternoon Gypsy Safari to Kanha National Park for wildlife viewing. Afternoon safari starts from the gate at 03:00 PM and continues till sunset. Afternoon safari has a distinct charm as most of the animals come to water holes for water, Afternoon safari can make up if you lost ant chances in morning safari.

Return to the resort by late evening.

In the evening, Wildlife Documentary show on kanha and its Tigers as well as flora, Fauna. Also discussion on sustainable tourism in Kanha. Spend time in the library.

Today after breakfast you will proceed to Jabalpur and drop to railway st. / airport for onwards journey.

Bandhavgarh National Park is one of the most popular national parks in India and is located in the Umaria district of Madhya Pradesh. The park derives its name from the most prominent hillock of the area, which is said to be given by Hindu Lord Rama to his brother Lakshmana to keep a watch on Lanka. Hence the name Bandhavgarh (Sanskrit: Brother's Fort).

The density of the tiger population at Bandhavgarh is one of the highest known in India. The park has a large breeding population of leopards, and various species of deer.

Maharaja Martand Singh of Rewa captured the first white tiger in this region in 1951. This white tiger, Mohan, is now stuffed and on display in the palace of the Maharajas of Rewa.

The most visited and most iconic virgin jungles in central Indian state of Madhya Pradesh. Kanha is magical, mesmerising, mystical & far bigger as well as diverse than Pench and Bandhavgarh, it is not only large but also beautiful, living upto the kipling tales and sherkhan of Mougli. Kanha is located approx 165 kms from Jabalpur.

Jabalpur is rated as most beautiful destination of world - votes 1,00,499 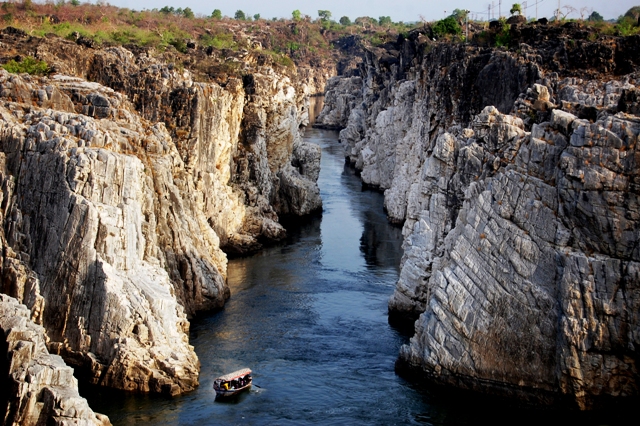 If you are fed-up of crowded wildlife sanctuaries, struggle for getting safari tickets, standing in a queue of safari jeeps, over-crowding of safari jeeps during wildlife sighting then Satpura National Park is the right solution for real wildlife lovers. It is the place where every true wildlife lovers should must visit to appreciate the peaceful jungle, away from hustle & bustle of safari jeeps, beautiful hilly terrains, deep gorges, rivulets, untouched forest locations etc. of Satpura National Park is nurtured in the Satpura Ranges of Hoshangabad district in Madhya Pradesh. Along with adjoining Pachmarhi & Bori Sanctuaries, Satpura National Park it covers 1427 km2, otherwise it covers an area of 524 sq.km. Various ways of wildlife watching distinguishes its from other tiger reserves of India. Here one can do jeep safari, elephant safari, walking safari & boat safari

It is located overlooking the mesmerizing backwaters of a dam built on Denwa River in Satpura National Park, the area is popularly known as Madhai.It is built on 10 acres of forested land along the river and across the river lies the national park which is approached by a boat and then by jeeps to go deeper into forest. The lodge offers stunning views of the Denwa River, grasslands across and rolling Pachmari hills.
Satpura National Park is spread over 1427 sq km and was formed in 1981 after joining Satpura, Pachmari and Bori sanctuaries and is a unique habitat from about 200 feet and 4000 feet.The terrain of the national park is extremely rugged and consists of fascinating deep valleys, sandstone peaks, narrow gorges, rivulets, waterfalls, thickly dense green forest of Sal and other medicinal herbs, it also has large tracts of Teak forests.

Kings lodge is environmentally sensitive, harmonious with the natural features of the site and accentuates natural daylight to all facilities. Local knowledge and art has been incorporated in the development and the lodge has been constructed using local manpower. Bandhavgarh was established in 1968 as a National Park, and is spread over an area of 448 sq. kms. This national park was declared as a tiger reserve under Project Tiger in the year 1993. It is predominantly covered with vegetation like SAL, SALI, DHOBIN and has vast stretches of grasslands spread over 32 hills, the region though smaller than other wildlife parks has one of the highest density of tigers in the world.

The Jackson's hotel dates back to the colonial British Raj era in the nineteenth century. Owned and managed by the British during pre - independence days, the Jacksons is currently owned and managed by the Indo Canadian promoters - The Jasuja Group. The Hotel has been thoroughly renovated and modernized to aid ultra - modern amenities to give this heritage property its new image and Name - Narmada Jacksons

More than a hotel – JehanNuma is an experience. You could be a business traveller attending a meeting or a conference, or you could be just stopping here for a day or two on your journey deeper down the rich heritage trails of Madhya Pradesh. You could be a tourist exploring Bhopali culture, or maybe wanting to stay longer to connect with your inner creative muse as artists and writers and seekers have done before you here. JehanNuma becomes the haven to come home to in Bhopal, made more beckoning by the personalized care and comfort in a delightful setting.

There is a history that talks to you when you visit the JehanNuma Hotels – a rare and royal heritage that you will discover everywhere, and especially in the fine nuances of the culture and hospitality that welcomes you. JehanNuma speaks gently but eloquently of a unique and distinctive influence – that of the Begums of Bhopal.