Jagdalpur - The most Beautiful..

In this package holidaytravel.co offers beauty and chase the wilderness of Central Jungle Tour of India in Chhattisgarh, Places/Platue surrounded with dark forests, beautiful mountains, streams, waterfalls, natural caves, Lakes  and Temples. Package includes Best hill stations of Chhattisgarh Bailadila along with Jagdalpur which has natural waterfalls and caves. In this 7 days package you will cover waterfalls, Temples, Lakes, Caves, Wildlife sanctuaries and River. Package is well designed and suited for Families with Kids, Honeymoon Couples and Holiday Makers. 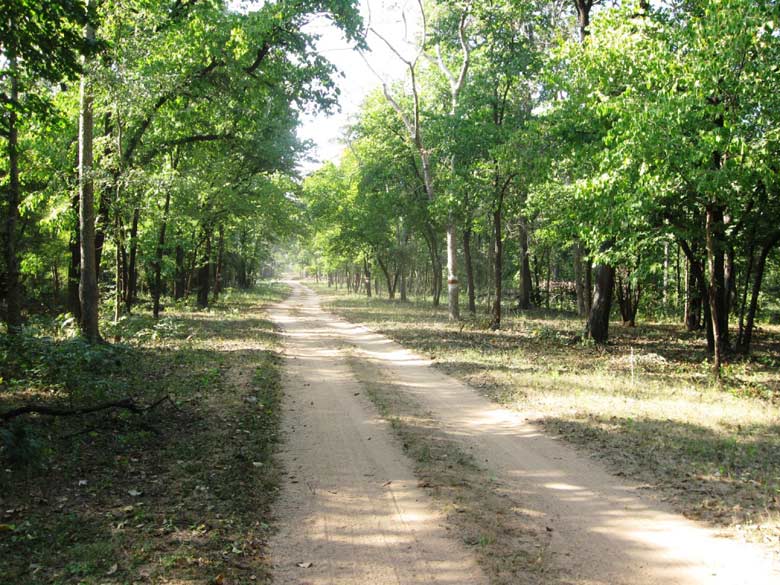 Pick-up from Raipur Railway Station/Airport departure for Mohda via Barnawapara Sanctuary, after some that you will proceed for mohda. Overnight stay at Hareli Eco Resort, Mohda.

The land of virgin wood, where wildlife is still unexplored and unperturbed by tourists, Barnawapara in the GREEN state Chhattisgarh is truly a place that one must not miss out on! At Barnawapara Wildlife Reserve life has its own pace, and the tik-tok of the clock seems to just vanish and all one remembers is the magic of nature’s beauty. The perfect light, fascinating backgrounds and the existence of a variety of majestic animals make this sanctuary a perfect place for photography as well. Barnawapara wildlife reserve is an ideal getaway from the bustles of the concrete jungle; it is certainly one of those special places that touch your heart.

After breakfast departure From Mohda and Proceed to chitrakot fall which is a natural waterfall located to the west of Jagdalpur, in Bastar district in the Indian state of Chhattisgarh on the Indravati River. After that you will proceed for local siteseeing of jagdalpur i.e. Danteshwari Temple, The Sri Venkateshwara Swamy Temple and Kailash Caves. After that you will back to in your leisure and Overnight stay at Jagdalpur.

Chitrakot fall: One of the most impressive attractions of Chhattisgarh is the Chitrakoot Falls, located 50 km from Jagdalpur, in the Bastar district, and 273 km from Raipur. River Indravati flows down perennially from the Vindhya mountain ranges and gives rise to these waterfalls, which are a major tourist attraction, especially during the rainy season. The Chitrakoot waterfalls appear to be in the shape of a horse-shoe. Positioned at a height of about 100 feet, Chitrakoot Falls are the largest waterfalls in India.

Danteshwari Temple: It is located around 84 km from Jagdalpur city is the famous and sacred temple of Ma (Hindi for mother) Danteshwari, a local goddess, worshipped as an incarnation of Shakti. This temple is believed to possess several divine powers. Every year during Dushera thousands of tribals from surrounding villages and jungles gather here to pay homage to the goddess. Situated in Dantewada, south-west of Jagdalpur, at the confluence of the holy rivers Shankini & Dhankini, this six hundred year old temple is one of the ancient heritage sites of India and is a representation of the religio-socio-cultural history of the Bastar region. Danteshwari Mai temple serves as the most important spiritual center for the people of this region.

Kailash Caves jagdalpur: Kailash Caves are located in the Kanger Valley National Park area near Mikulwada. The caves are located around 40 km from Jagdalpur. Discovered recently in 1993, the caves are around 250 meters long and are situated at an altitude of 40 meters above the ground level. It features stalactite and stalagmite formations that offer stunning sight. Access to the cave is through a narrow opening and at the end of the cave is a huge stalagmite formation in the shape of Shivlinga. The hollow walls of the cave, when struck by hand, make incredible musical sounds.

After breakfast you will proceed for some local siteseeing as jagdalpur is famous for its Temples, Caves, Waterfalls and Lake i.e. Kotumsar Caves Jagdalpur, Aranyak Cave, Dalpat Sagar Lake,  Boating and Tirathgarh Waterfalls. Overnight stay at Jagdalpur.

Kotumsar Cave: Kotumsar Caves are situated at a distance of about 40 km (25 mi) from Jagdalpur. Kotumsar Caves are about 35 meters below ground level and around 1371 meters long.
These caves have got the distinction of being India's first and world's second longest natural caves. As they are underground, there is pitch-darkness inside. It features Stalactites and Stalagmites formations. Entry to the caves is through the narrow stairs and visitors have to pass through tall, narrow chambers for gaining access to the main hall that features superb acoustics.

The caves feature five chambers having several blind wells. Lots of tribal tales are also associated with it and are also known as Gupanpal or Kutamsar Caves. The Stalactites found inside the cave have been an interesting research topic for scientists and even arouse the curiosity among the visitors. There is lack of oxygen when going deep into the caves. In view of which, for safety reasons, entry beyond certain points has been restricted.

Aranyak Cave: Discovered in the month of July 1996, Dr. Suresh Tiwari and his troop were the first group to view this marvel. Followed by a 15feet long aven, the cavern(solution cave) opens into a series of galleries and shafts, having 2 big and 3 small chambers, with a perfect view of developing/budding speleothems. This cave is one of the adventurous cave of Kanger Valley National Park, situated at the extreme north-west of Park area and comes under the village of Madarkonta.

Dalpat Sagar Lake: Dalpat Sagar Lake is located within Jagdalpur. It is one of the biggest artificial lake in Chhattisgarh. It was built by Raja Dalpat Deo Kakatiya over 400 years ago to harvest rain water.

Tirathgarh Waterfalls: It is located around 38 km from Jagdalpur in the renowned eco tourism site of Kanger Valley National Park. The scenic Tirathgarh Falls is one of the most magnificent waterfalls in Chhattisgarh. Water cascading from the beautiful hills surrounding the falls provides splendid views.
Splashing streams of water comes down at an incredible speed from a height of more than 100 feet on the river Mugabahar which originates in a lake not very far away from this point. The area surrounding the fall features lush green forests that enhance the beauty of the falls. The water flowing through the various streams and crossing numerous paths along the way in a zigzag manner and finally ending up in the falls is a treat to watch.

After breakfast you will proceed for Baila Dila which is one of the best hill station of chhattisgarh.

Baila Dila hills are one of the exotic hill stations in Chhattisgarh. The enormous beauty of the valley comes alive in its waterfalls, gardens and forests. The beautiful landscapes include huge blocks of rocks in creepy shapes, an array of coniferous trees, flowering bushes, lovely lakes and the cool climate much in contrast to the arid environs of the state. This trip can be for a week visit or if you are in a group you can stay in the forest guest house over the night and enjoy time and nature. Trekking, hiking, and rappelling are some of the outdoor activities that you can enjoy here at the Baila Dila Hill Station

After breakfast you will proceed for Dongargarh, Dongar means mountains while Garh means fort. Legend goes that around 2200 years ago, Raja Veersen, a local king, was childless and upon the suggestions of his royal priests performed puja to the gods. Within a year, the queen gave birth to a son whom they named Madansen. Raja Veersen considered this a blessing of Lord Shiva and Parvati and constructed a temple here. Overnight stay at Dongargarh.

After breakfast you will proceed for Raipur which is located near the centre of a large plain, sometimes referred as the rice bowl of India. The Mahanadi River flows to the east of the city of Raipur, and the southern side has dense forests. The Maikal Hills rise on the north-west of Raipur; on the north, the land rises and merges with the Chota Nagpur Plateau, which extends north-east across Jharkhand state. On the south of Raipur lies the Deccan Plateau. You will visit Sita Nadi Sanctuary, Shadani Darbar, Doodhadhari Monastery, Mahakoshal Art Gallary etc. Overnight stay at Raipur.

Sita Nadi Sanctuary: Sita Nadi Sanctuary is another Sightseeing Attractions in Raipur. It is situated in Chhattisgarh in the district of the Dhamtari. It was established in 1974 after the Wildlife Protection Act passed in 1972. Its average altitude is 327 m to 736 m. the total area of this sanctuary is 556 sq Km. the Sita Nadi river flows across this sanctuary which is why the Dhamtari sanctuary derives its name. The Sita Nadi meets the Mahanadi River in Deokhut. If you are visiting Chhattisgarh Wildlife sanctuaries then you are highly recommended not to miss the Sita Nadi Sanctuary visit. Ideal season to visit Sita Nadi sanctuary are from November to June. It is abundantly rich in vegetation. The woods are full of the treasures of trees like Tendu, Mahua, Harra and some moist peninsular such as Sal, Teak and Bamboo.

After Breakfast, Check out and drop to Raipur- Tour Ends but sweet memories remain.

Call of the Jungle Chhattisgarh Package Tour - Package Other Details

How to Reach Raipur

By Air
Raipur, the capital of Chhattisgarh, is the only place in the state that is linked by air to New Delhi, Mumbai and Bhubaneshwar by regular flights.

By Rail
Raipur is one of the two main junctions in the state that are on the routes of express and passenger trains that either directly or indirectly connect the state to other parts of India. The superfast Rajdhani Express connects Raipur to New Delhi, the Bilaspur-Nizamuddin Gondwana Express runs thrice a week and travels from New Delhi to Raipur via Bilaspur. Passenger and mail trains connect most big and small towns within the state to Raipur.

By Bus
Raipur has excellent connections to places in the neighbouring states of Andhra, Madhya Pradesh, Orissa, Maharashtra, Jharkhand and Uttar Pradesh. Inter-state and national highways connect Raipur to Bhopal, Nagpur, Jhansi, Jabalpur and to cities further afield like Kolkata and Bhubhaneshwar. The important towns of the region, Bhilai (25 km), Durg (41 km), Jagadalpur (297 Km), Rajnandgaon(70 km) and Bilaspur (115 km) are connected with Raipur by road. Interstate State Roadways buses ply between the different cities while chartered bus operators run services on major routes Roadways buses are the lifelines of Chhattisgarh as they connect some of the more inaccessible places in the interiors to the capital, Raipur.

The best time for a visit Raipur is during the winter season between the months of October to February/March when the climate is pleasant. Summers are pretty hot with temperatures reaching the mid 40 degree C mark and the rains in June and July can make travel fairly difficult in this region.
In the cooler months between October and march, the temperatures are moderate with day time temps being in the region of the mid 20s and nights falling to 5 degrees C at the height of winter in early January. This is the best time to se the sights around Raipur as the weather is very pleasant.