If you are looking forward to visit the old silk route in Sikkim, so you are on right place. Holiday Travel India provides trip to offbeat and most beautiful places on earth. The Silk Route in the State of Sikkim is an ancient trade root which is derived from Lhasa. Its exquisite scenic beauty and comfortable climate have made the place a hot-favorite destination. In this package you will visit Pedong, Aritar and Zuluk with their famous excursion. We provide comfort facility, best arrangements of tour programmer. This famous tourist destination will leave you spellbound with a wide variety of destinations to explore Sikkim.

What is unique in Sikkim Silk Route Tour Package and why?

Sikkim Silk Route Tour Package is one of the unique packages of North east which a largest network of trade avenues was once. This road had been part and parcel of a cultural amalgamation that encompassed various regions of Asia and connected the East and West of India, China, and Pakistan. According to this itinerary you would have a great chance to visit famous small villages of this route and experience new culture and tradition.

After arrival at Bagdogra airport or railway station and proceed to Pedong which is oldest towns in this region with significant historical importance. Upon arrival check in to hotel and you may have lunch at same hotel. After lunch you have some time to rest. Then you will be taken towards some famous sightseeing which includes Cross Hill, Tinchule View Point, Damsang Fort and by the evening you will visit Shahid Park. After sightseeing come back to hotel and overnight stay with dinner at Pedong hotel

After breakfast start your day by visit some more famous sightseeing of Pedong which includes Rikkisum, Ramitey and Pedong Monastery. After sightseeing you may have lunch at any nearest restaurant, later you will continue your tour by visit Silent Valley then come back to hotel and rest of the day free at your leisure. Overnight stay with dinner at Pedong Hotel

Lunch: Served at any nearest restaurant

After breakfast start your day by proceed Aritar which is famous for its pristine beauty, temples and monasteries. Upon arrival you will visit Aritar Gumpa, Phushrey Lake and Mankhim Temple. After that come back to hotel and overnight stay with dinner at Aritar hotel

On Fourth day you will proceed for Zuluk is a small village beside a winding road. It was once a transit point to the historic Silk Route from Tibet to India. Upon arrival you will visit Thambi View Point, Lungthang, Kalipokhri Lake. After sightseeing you may have lunch at any nearest restaurant. Then you will visit Tukla Valley. By the evening come back to hotel and overnight stay with dinner at Zuluk hotel

Lunch: Served at any nearest restaurant

After breakfast you will visit Kupup and Baba Mandir, after that you will return back to hotel and rest of the day free at your leisure. Overnight stay with dinner at Zuluk

Day 06: Departs from Zuluk to Bagdogra airport or railway station

Pedong can be easily reached from Siliguri via Kalimpong by road in approximately 4 hours. The nearest Airport is Bagdogra about 100 kms away and New Jalpaiguri the major rail station about 94 kms. Both take a little more than 3 hours to reach.

Cross Hill: Cross Hill is situated off the Reshi Road and in close proximity from Sillerygaon. This place is frequently visited by the Christian community. This place offers a very wide and wonderful view of the Mountains and is also the perfect sunset point in Pedong.

Tinchule View Point: The Ramitey view point is accessible by vehicle or by a 3 km trek from Sillery Gaon. The view point is one of the vantage locations to view both the Kanchendzonga above and the Teesta River below.  A bird’s eye view of the entire region is visible from this point right from Teesta Bazar to Majhitar on a clear day.

Damsang Fort: Fort is 6 km from Pedong bazaar and 2 Km. walk from the main road. Almost nothing is left in the deep forest except few walls of the ancient fort. Infested by leeches. Nice panoramic view from the hill top.

Shahid Park: This memorial stone has been built in the honour of a local young lad of 20 years working in Indian army. Let Palender Rai, shahid on 10th June 02 at Thangdhar J & K sector (Kargil war). This is the highest point of the cross hill and clear panoramic views of Sikkim on the opposite.

Rikkisum: A viewpoint on a different route on the way from Algarah to Lava.

Pedong Monastery: Kalimpong the serenity of Pedong is something we must look to understand. As the site comes under the administrative spheres of Kalimpong make sure to understand within its surrounding you will witness many Buddhist monasteries.

Phushrey Lake: Phushrey Lake is a nature observer’s paradise. It is blessed with a very rich variety of flora and fauna. Different species of butterflies and orchids are a common sight here. The beautiful reflection of the huge log in the lake is a visual treat.

Mankhim Temple: The Mankhim Temple, a hilltop temple near Aritar in East Sikkim, is one of the most popular tourist attractions in the state. The temple not only holds great religious significance, but is also a huge hit amongst tourists. The Mankhim Temple belongs to one of Nepal’s oldest ethno linguistic groups, the Rai community, who visit the temple twice a year, to celebrate the Sakewa Puja, in order to sow more plants.

Lampokhari: Lampokhari is the oldest freshwater lake in Sikkim at an elevation of 1400 m and is popularly known as the Aritar Lake amongst the natives. The lake is a visual treat and is formed in the shape of a human boot

Parbateyswar Shivalaya Mandir: Parbateyswar Shivalaya Mandir is a beautiful temple dedicated to Lord Shiva. The temple is flocked by the visitors, especially in the Hindu month of Sawan. It is regarded as a sacred pilgrimage site, where thousands of devotees come to seek the blessings of Lord Shiva (presiding deity) and stay here during the month of Sawan to drink the holy water from a sacred vessel.

Places to visit in Zuluk

Thambi View Point: Thambi View Point offers a panoramic view of Mt. Kanchenjungha. Located at a distance of 14 kms from Zuluk on the famous zig-zag road (locally called Bhulbhulaiya for its 30 hairpin turns) Thambi is a roadside viewpoint that opens up suddenly to Mt. Kanchenjungha. This view point is located on a U turning of the Zig Zag Road. The geometry of curves of the three level Zig Zag Raod is clearly visible on a clear day and is unique and unparalleled. In winters, both the sides of the road are covered with snow, while in Monsoons i.e May to July, the entire range is filled with Rhodedondrons on both the sides of the road.

Lungthung: Thambi View Point which offers a great bird’s eye view of Mt. Kanchenjungha and the whole of Eastern Himalayas is within a kilometre of Lunthung–Dhupidara village. From January to April the whole of Lungthung–Dhupidara is virtually buried in snow and the only colour you can see is white. The home-stays are clean with all basic comforts and attached Western Bathrooms and great views of snow capped mountains. 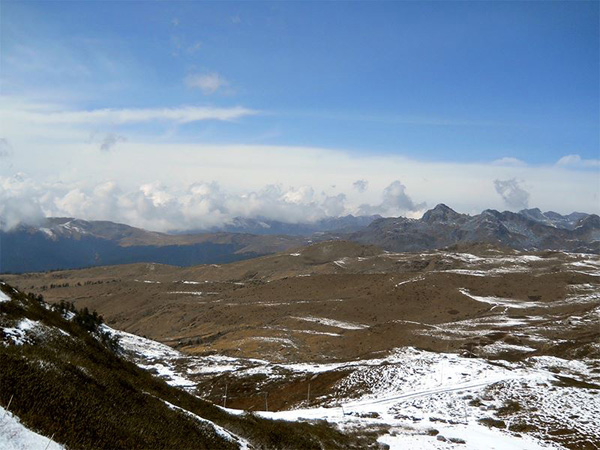 Sikkim today is a rapidly evolving society. Its major towns like Gangtok the capital city, Namchi and Jorethang already are urbanizing at a steady pace. More and more people are being attracted by business opportunities and gradually imbibing the cosmopolitan character. Though Sikkim is predominantly a Buddhist state its spirit is secular and here churches, monasteries, gurdwaras, mosques and temples co-exist peacefully. It is hard to define the true culture of Sikkim. It could best be called a wonderful mosaic, a unique pattern made beautiful by the unusual harmony in its individually colorful threads.

The indigenous peoples of Sikkim include the Lepcha and Bhutia, in contrast to the dominant, heterogeneous British Gorkhas population of Sikkim. Sikkim has an interfusion of diverse communities, cultures, religions and customs. Sikkim is a fine specimen of harmony between people from different areas and regions. The people of Sikkim are known as Sikkimese. The developmental activities in Sikkim like construction of roads, bridges, buildings etc, have informally invited migrant laborers from the plains and Nepal.

What is unique in Sikkim for shopping?

Shopping is Sikkim is truly a delightful experience. The main markets for shopping are Old market, New Market and Lal market. Here you will find all kind of shops, which offer good range of items to be purchased. These markets sell carpets in addition to wooden and bamboo artifacts. Sikkim shopping is renowned for its elegantly woven materials that incorporate dresses, shawls, blankets and knitted garments.