Himachal Pradesh the land of eternal snow peaks is a charming mountain state. Blessed with charming crystal lakes, pretty flowers, ancient shrines and beautiful people; Himachal Pradesh is one of the most beautiful states in India. Also known as Switzerland of India. Manali is a popular hill station located in the Indian state of Himachal Pradesh. Manali is situated at an altitude of more than 2000 m from where the eyes fall on the views of forests, orchards, river, mountains ranges and more, for nothing but sheer visual delight. Manali is one of the best honeymoon destinations of India. Manali is located at northern end of Kullu valley

Top Highlights Of The Tour

Shimla Manali Tours Packages
Planning to escape the summers, plan a trip to Himachal; the most loved tourist destination in India. Shimla Tours Packages includes a tour to the Queen of Hills, Shimla where tourist can feel the chilly winters and enjoy the adventures of skiing. Manali, situated in the Kullu valley which offers great escapades like river rafting and visit to historical wonders like Gompas and Buddhist monasteries is included in Manali Tours. 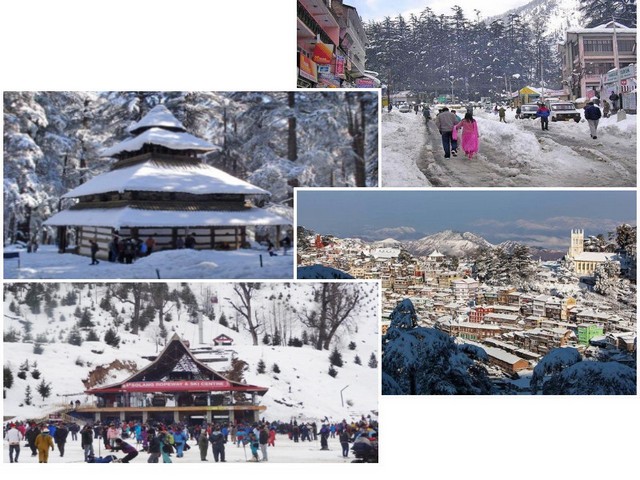 Start The Tour from Delhi Bus stand Board your Volvo from predefined point (Mentioned on Ticket) a.t Delhi, Transfer to Manali by evening Volvo coach at 17.30 .Overnight journey...

Arrival Manali by 08:00 Hrs in the morning, Manali Our cab pick from Manali Volvo point Arrival Manali by 10: 00 Hrs in the morning, then we proceed to Manali Hotel.(Early check in availability basis )Arrival at Hotel Check in hotel After Breakfast at hotel. After Rest we proceed to half day Manali local sightseeing like Hadimba Devi temple, Rahalla Falls, Monastries , Gompa, Vashisht Temple, Manu temple. In Between your visit have lunch at casa Bella Vista and some rest there. After that came back to hotel and overnight stay at hotel.

Hadimba Devi Temple: Manali has many attractions but the main centre of interest, historically and archeologically, is undoubtedly the Hadimba Temple. This temple dedicated to goddess Hadimba or Hadimba Devi with a finely wrought four - tiered pagoda roof, dating back to 1553, is built around a natural cave, which enshrines the footprints of the goddess Hadimba. Hadimba was the wife of Bhima, one of the five great Pandava brothers of the Mahabharata, and later became the patron goddess of the Kullu. This four story wooden temple is located in the middle of a forest called the Dhungiri Van Vihar.

After breakfast visit Solang Valley and Rohtang Pass. Solang and Rohtang Pass are the Major attractions of Manali. In Between your visit have lunch at Casa Bella Resturant, Rest of the day is for your leisure. After that came back to hotel and overnight stay at hotel.

Solang Valley: Solang Valley in Manali is located at a distance of 13 kms in a side valley at the top of the Kullu valley is a splendid valley between Solang village and Beas Kund. Solang valley offers the view of glaciers and snow capped mountains and peaks. Solang Valley has fine ski slopes. The Mountaineering Institute of Manali has installed a ski lift for training purpose. Located here is a hut and guest house of the Mountaineering and Allied sports Institute, Manali. Now a few hotels have also come up. The winter skiing festival is organised in Solang Valley. Sking and Paragliding are two main activities are organised here. Apart from this many other adventure sports are available like Zorbing, Horse riding & Snow Motor Bikes riding etc.

Rohtang Pass: Rohtang Pass is 51 kms from Manali. Located at a height of 3980 Mtrs, on highway to Keylong/Leh. The Pass offers a panorama and spectacular mountain view. once served as a crucial trade route, and still remains the gateway to the districts of Lahaul and Spiti.The Pass is open from mid April to November each year, and provides wonderful views of the entire surroundings. Just beyond the Pass is the Sonapani Glacier and the twin peak of Gaypan. The Beas Kund, the source of the Beas river, a holy site for Hindus, as the sage Vyas is said to have meditated at this spot, is also accessible from the Rohtang Pass.

After Breakfast Checkout Hotel & Transfer by Deluxe Bus from Manali to Shimla (Bus tickets not include on direct payment around 450/-PP)  by 9.00 A.M. Arrive Shimla by Evening and check in hotel. Evening free for leisure overnight Stay at Shimla.

After breakfast visit local sightseeing of Shimla like Jakhu Temple,Kalibari Temple,Church,Mall Road, The Ridge. In between your visit have lunch And some rest at Hotel Alfa Resturant. After that check into hotel and overnight stay at hotel.

Kalibari Temple: The another famous  place of worship is Kalibari Temple of Shimla. This is a popular tourist attraction and is situated at a very strategic location. The temple was built in the year 1845 and is dedicated to Goddess Kali who is also known as Shyamala. Shimla derived its name Fom Goddess Shyamala.

After breakfast proceed for visit Kufri. Kufri is a small hill station in Shimla district of Himachal Pradesh state in India. It is located 13 km from the state capital Shimla. The name Kufri is derived from the word kufr meaning "lake" in the local language. Kufri has a Himalayan wild life zoo which hosts rare antelopes, felines and birds including the Himalayan monal, the state bird of Himachal Pradesh. After that came back to hotel and overnight stay at hotel.

After breakfast Check Out From Hotel and proceed to take volvo from Shimla volvo point to Delhi .  In the evening board your board your Volvo for New Delhi in the evening at around 6:30 PM and start your return journey.
Package Ends with sweet memoirs of journey.
Note: Guests can also spend their day at leisure in Shimla & board the Volvo Bus in the evening.( On request).

Vashisht Temple: Vashist, a small village 3 kms from Manali located on the Left Bank of River Beas in Manali towards Rohtang pass is worth a visit, which is renowned for its Hot Water Springs and Temple. The village is also the site of some old temples, dedicated to the great sage Vashisht, and to Lord Rama. The Himachal Tourism sulphur baths are just beyond these shrines. Natural Hot Sulphur Water Springs with two separate bathing tanks for Gents and Ladies, which are always full of tourists. Turkish Style Showers fitted baths have also been built nearby. Hot water from the nearby Spring is provided for bathing.