Maheshwar town is built on the site of the ancient city of Somvanshya Shastrarjun Kshatriya, and was the capital of king Kartavirya Arjuna,(Shree SHASTRARJUN) who is mentioned in the Sanskrit epics Mahabharata and Ramayana. Maheshwar was known as Mahissati (Mahishamati in Sanskrit) in ancient times and was the capital of Southern Avanti. Maheshwar is a Hindu Pilgrimage City in Madhya Pradesh Central India, located 91 km from Indore. Maheshwar lies on the north bank of the Narmada River. It was the capital of the Malwa during the Maratha Holkar reign till 6 January 1818. 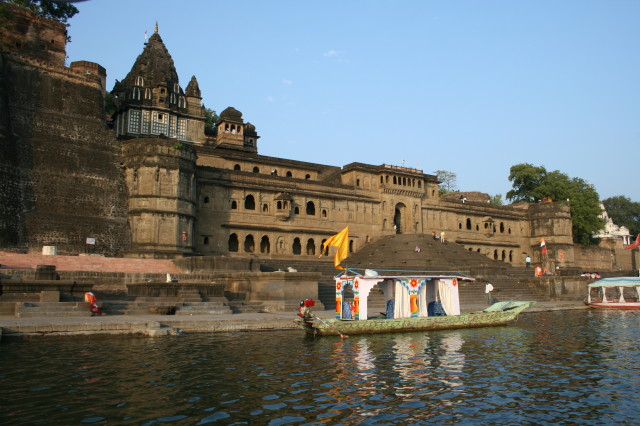 Arrive at Indore Railway station / airport and check into Hotel. After get ready to will proceed for indore local siteseeings i.e. Lal bagh Palace, Kanch Mandir, Rajwada Palace and Regional Park in the evening where you can attend light and sound show.

Begin the day with early morning drive to Maheshwar (95kms/03:00hrs). It is located on the bank of Narmada river and had served as capital of Holkar dynasty who has deep impact in history of this Malwa region.

Throughout the tour you will come across the monuments build during Holkar reign. Do full day sightseeing in which visit to Ahilya fort and riverside temples. In addition to this, do boatride in Narmada river.

After breakfast check out from the hotel, proceed to Peshwar Ghat, Fanase Ghat, Holkar Fort and Ahilya Ghat line the river Narmada. After sightseeing you will be free at your leisure.

After breakfast check out from the hotel, proceed to Mandu - the mystical & Magical Town just located 20 miles away. Full Day site seeing in Mandu, Jahaz Mahal, Hoshang shah Maqbara, Rani Rupmati Pavilion etc. Return to Maheshwar in evening.. After sightseeing you will be free at your leisure.

After breakfast check out from the Narmada Retreat and proceed to Indore Railway station / Airport. Tour End

How to Reach Maheshwar

November to February, when the weather is the coolest and driest. It starts becoming really hot towards the end of March, before the summer heat sets in in April and May, followed by the monsoon.

Narmada Retreat is a quality property that offers visitors to the beautiful historical town of Maheshwar an ideal and convenient location to enjoy comfortable accommodation along with warm hospitality.
About 2km from the centre,

Narmada Retreat has bungalows set around a huge, well-tended garden overlooking a river. The spacious quads, or ‘family rooms’ – which come with three toilets! – are great value if you’re in a group, while the AC tents have lovely river views. There’s also a restaurant open from 8am to 10.30pm. Turn right just before the floodlit roundabout and continue over two crossroads before turning left at the end of the road. 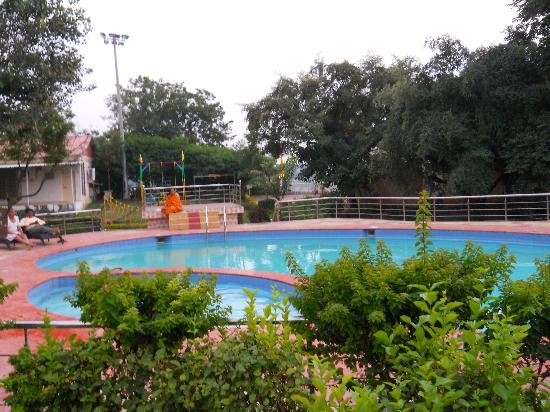 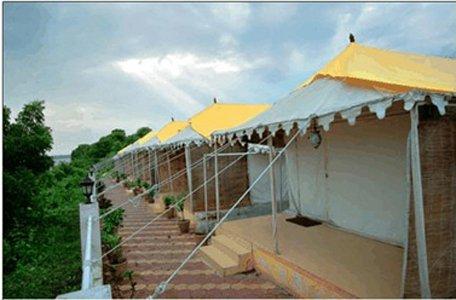 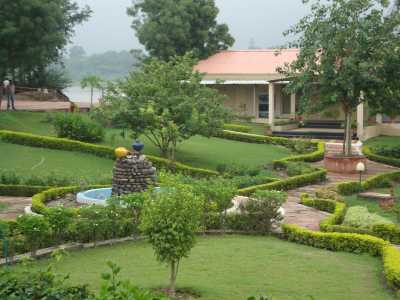 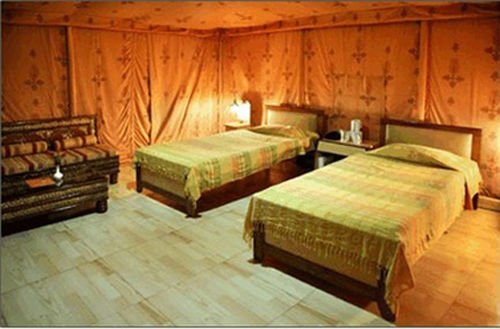 Narmada Ghat: Narmada Ghat is famous off-beat destination in close proximity to the town of Maheshwar surrounded with lush green environs. It is a nice spot for picnicking and to enjoy a day off from all the worries and stress one has. It is located on the banks of river Narmada and is one of the many places constructed by Rani Ahilyabai.

Peshwar Ghat, Fanase Ghat and Ahilya Ghat line the river Narmada, flights of steps lead down from the sandy banks of the river, and through the day a kaleidoscope of rural Indian can be seen here, in the pilgrims and holy men who sit here in the ferry loads of villagers who cross and recross these surging waters.

Temples: With their soaring spires, the many - tiered temples of Maheshwar are distinguished by their carved overhanging balconies and their intricately worked doorways. Temples to see are Kaleshwar; Rajarajeshwara, Vithaleshwara and Ahileshwar. 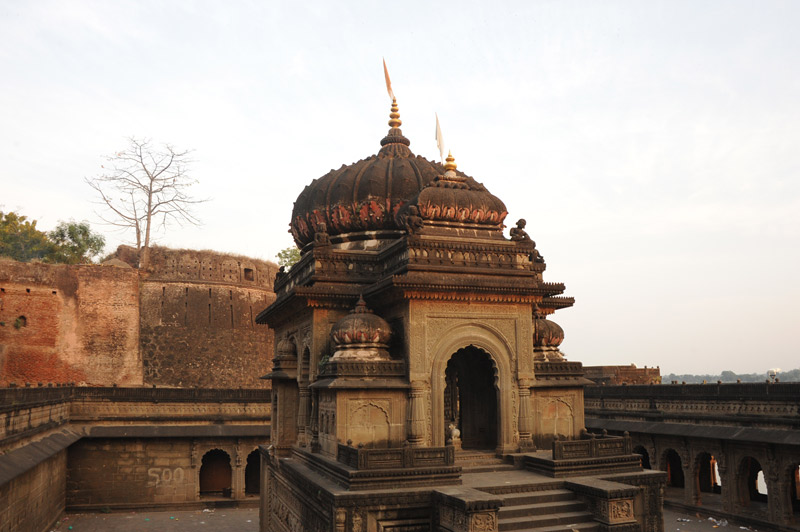 Holkar Fort: Located on the banks of the holy river Narmada, the fort was built in the 18th century and was the residence of Rani Ahilyabai Holkar. Also known as Queen’s fort; the fort was the administrative headquarters of the Holkars.

One can see the life-size statue of Rani Ahilyabai Holkar sitting on the throne. Chhatris, temples, a wada make the fort an interesting place to visit. Today, the fort is a heritage hotel, it is managed by Shivaji Rao Holkar, son of the founder of the hotel and last Maharaja of Indore, Prince Richard Holkar.

Maheshwari Sarees: Introduced into Maheshwar 250 years ago by Rani Ahilyabai, the sarees are renowned throughout India for their unique weave. Woven mostly in cotton, the typical Maheshwari saree has a plain body and sometimes stripes or checks in several variations. The mat border designs have a wide range in leaf and floral patterns. The pallu is particularly distinctive with five stripes, three coloured and two white alternating, running along its width. Maheshwari has a reversible border, known as bugdi. 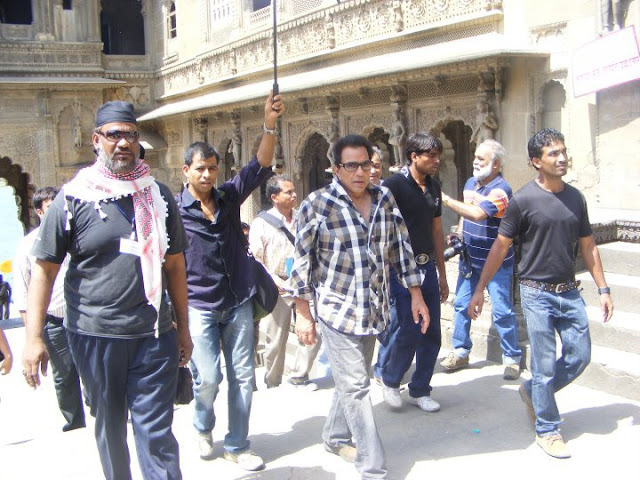 Events and Festivals in Maheshwar

Ahilyabai's birthday is celebrated in May each year, with a palanquin procession through the town.

The two biggest religious festivals there are Maha Shivratri (the great night of Shiva), and the Muslim festival of Muharram (the holy first month in the Islamic calendar) featuring a procession of floats that are submerged into the water.

On Maha Shivratri, thousands of women from surrounding village spend the night on the ghats, drumming and singing, before bathing in the river and worshiping the multitude of shivalingams there.

Nimar Utsav is held around Kartik Purnima each year, and consists of three days of music, dance, drama, and boating. An annual Sacred River Festival, featuring classical music performances, is held at Ahilya Fort each February.

And, on every Sunday before Makar Sankranti, Swaadhyaaya Bhavan Ashram holds a chariot festival (the Mahaamrityunjaya Rath Yatra) in Maheshwar.

Guru Kripa Food & Hotel: The appearance and setting of the restaurant might not appeal you very much, but well don't judge a book by its cover because the food that they have to offer will certainly make up for it.

Indian Heritage Food: This is one of the rare restaurants in Maheshwar that will provide you non vegetarian food and that too at a very cheap price. The interiors of the restaurant are well designed and the service is pretty quick too. It also boasts of a garden.

Laboos Café: The Café is located in a very picturesque area, close to some of Maheshwar's major attractions. The coffee served is worth INR 25 and given that fact that is quite cheap as per the standards of a Café, the quality of the taste is certainly not compromised upon. The Cardamom Tea is highly recommended.