Holiday Travel India provides an amazing wildlife journey of all zonal area of park i.e. Mukki and Kanha zone which are the premium zone for spotting tiger after that Kisli and Sarhi zone which having exquisite zones for capturing amazing birds and sightseeing of forest. This Package is designed to give you all kinds of comforts and eases while enjoying the safari or residing at any of the resorts.

This package starts from Delhi and ends at Delhi itself, our representative will receive you from Jabalpur railway station and take you to KanhaNational Park in well comfort ac vehicle. So plan your tour and get package benefits only with us at affordable cost.

Day 1: Delhi to Jabalpur (By train)

On arrival at Delhi railway station our representative will take you to Jabalpur Railway Station for onwards journey. Later in the evening you will pick the train (H.nizzamuddin Jabalpur superfast) at 17:50 for Jabalpur. Overnight in train.

On reaching Jabalpur railway station at 8:35 early in the morning. Later proceed for Kanha National park which is the largest national park in central India and wonderful wildlife in all over the world. After 4 hours drive, reach the park and check in to resort. Later have delicious lunch at resort, after that you may go for local tribe village tour and take photography at these places. Rest of the day free at your leisure. Enjoy bonfire, tribal dance, indoor games and different kinds of activity at resort for fun. Have tasty dinner and overnight stay at resort.

After served tea/ coffee in resort your morning will start with the morning Jungle safari to take pleasure of the tigers visit with different kind of flora and fauna of forest in Kanha zone. After attend the morning jungle safari of Kanha zone, come back to resort and have breakfast. After post lunch, again proceed for the evening Jungle safari of kanha national park in Mukki zone. After that come back to resort and have mouthwatering dinner and overnight stay at resort.

Why you must visit to these zones

Kanha zone: Kanha zone is also called the premium zone because it is located in the middle of the core area and, which is most popular among tourists, was declared as premium safari zone whose safari ticket cost is more than other non-premium safari zones.

Mukki zone: The Kanha National Park is surely a paradise for the wild species that brings the natural habitat for them.this location is filled with large varieties of fauna out of which the jungle is best known for Barasingha, the swamp deer and is famously called 'the jewel of Kanha'. The tiger tour is perfectly a great option for the nature lovers in Kanha of Mukki zone. There are many beautiful and attractive places for visit like Sondar Meadows ,Babathenga Tank ,Lapsi Kabar  Duke's Road and Ghorella.

Begin this morning with jungle safari of Kisli zone which lies adjacent to Kanha Zone and has the same habitat type for watching tigers and photography of wildlife scenes. Later come back to resort and after post lunch visit for evening jungle safari in Sarhi zone which is a recent addition to tourism infrastructure at Kanha. The area consists of dense mixed forests and is considered as most scenic for photography. Later have delicious dinner and overnight stay at resort in Kanha.

Why you must visit to these zones

Kisli zone: The Kisli gate is best accessed from Jabalpur and stops at the village Khatia, inside the buffer area. It is the second gate and in kisli zone there are some attractive place for visit like Mochidadar, chimta camp, Amahi. Sonf Meadows, Kope Dabri, Magarnala, These species of birds can catch many attentions of the bird enthusiasts. The tropical environment of Kanha Reserve is simply outstanding to make it a paradise for bird watching. At this tropical land, the bird lovers can surely find wide ranges of birds.

After breakfast check out from resort and drive to Jabalpur to board the train for Delhi. Pick train (Jabalpur – Nizzamuddin super fast ) at 17:30 and you will reach Delhi next morning by 11:50. Overnight in train

How to reach Kanha National park

By Road: Nearest cities from Kanha National Park are Jabalpur, Raipur, Nagpur. Jabalpur & Nagpur is on National Highway-7 which connects Varanasi from Kanyakumari. Anyone can reach Kanha from these cities by surface transfers. Among them Jabalpur is the closest to Kanha Tiger Reserve i.e, about 165kms. and road condition is also favourable. Routes are as follows:

When to visit Kanha National Park

During the rainy season it's closed. The park is open from October to June only. There is a slight variation depending on the exact month. Months of April, May and June are considered the best time to do wildlife photography and tiger photography. During this time, we can expect unusual photography of tigers as heat causes animals to remain close to water sources. Limited water sources will enable us to predict the animal location more accurately.

Things to do in National Park

Since the safari entry enter are located far from each other, there are few hotels/resorts located near every gate. The resorts range from low-budget, mid budget to luxury range. Comfortable stay options are available for tourists with good tasty meals and other amenities.

Four entry gates are made for safari vehicles to enter the park.

For safari bookings one has to contact us. Morning and evening safaris are available for tourism. The safari timing change as per seasons and sunrise and sunset.

Each gate offers safari permit to the exclusive area of that range and no vehicle is allowed to interchange the zones while on safari. The entry and exit gate for the vehicle has to be same. The gypsy charges or vehicle charges are separate and one has to pay differently.

The tourists are not allowed to get down from the vehicle throughout the safari. A set of rules and regulation exists for tiger safari and the park guide is aware of that. One has to follow his instruction in order to follow the regulations.

For the gate entry one needs to produce identification documents of the tourists like passport/driving license/ pan card etc. For the foreigners the passport in original has to be shown.

MUNNA : Munna is most photographed and most famous tiger of Kanha. His striking facial markings of letter C,A and T on his forehead  (forms a word-cat) makes him easily recognizable. He is about 15 year old and still rules fiercely.  He is also called as Langda or Meadow male. He is seen in meadows most of the times but his terrotiry ranges from Chhattapathara to Naktighati. 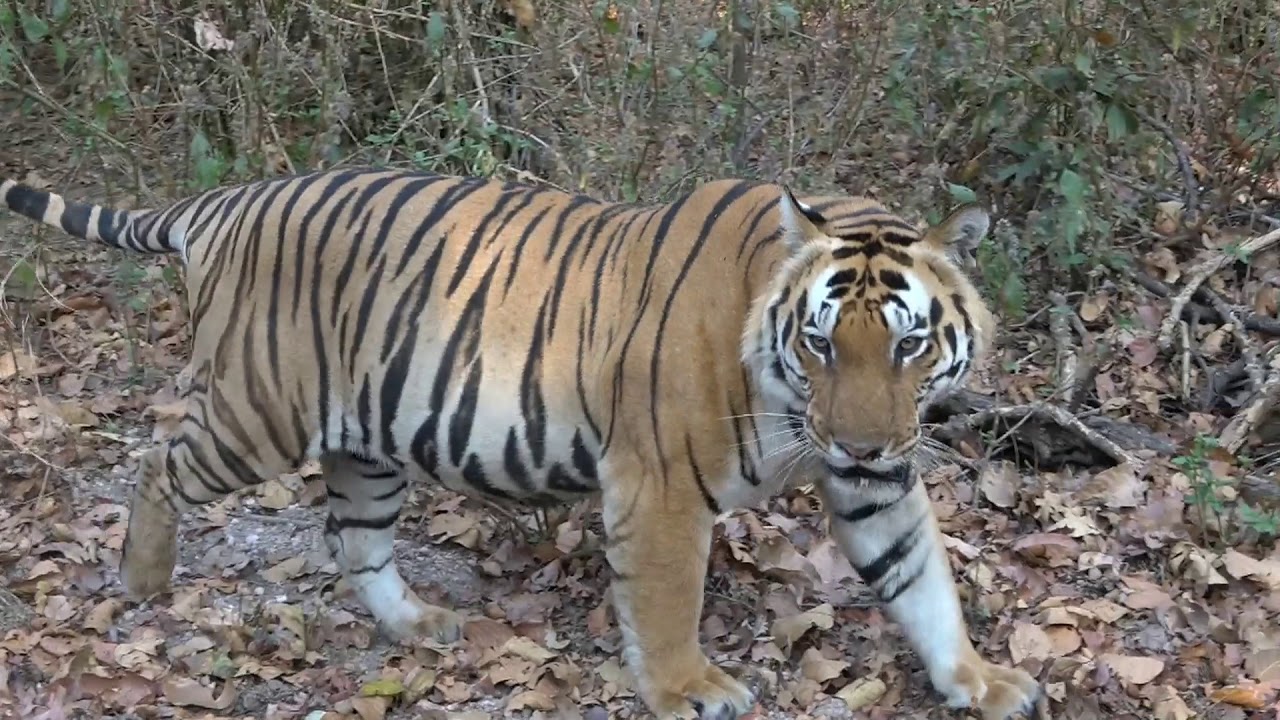 CHOTI MADA : First seen in January 2008, she is about 8 years old. This beauty is also called as Bisanpura female. She is daughter of Chain male and Badimada.Her territory lies in Bisanpurmeadows.She very calm and friendly.

NAK KATA : This huge male is about 12 years of age and usually very shy. He is ferocious and dominant male of Kanha. His name comes from a huge scar he adorns on his face and nose acquired during a territory fight with Munna.

Bamni Dadar: It is also known as the sunset point is quite popular among tourists. Most tourists visit Bamni Dadar to get the wonderful view of the setting sun and this is also one of the beautiful area in the park, Animals that can be sighted around this pont are typical of the mixed forest zone: sambar, barking deer, gaur and the four-horned antelope etc

Sonf Meadows: Sonf village was the first one to be moved out from Park area for making spreading the tiger reserve in Kanha. As the people being moved away from the reserve, within few years few barasingha descended here and they began to breed successfully. The thick and extensive cover of tall grasses protected the barasingha fawns from predators. Similar to Sonf, there are few other meadows also where the earlier villages were there.

Kanha Meadows: The Kanha Meadows is one of the most popular visit place in Kanha.  As many times tourist have spotted the tiger hunting its prey. In Large meadows you can witness the herbivores, and therefore carnivores are also there.

Shravan Tal: There is a small water pond in the reserve which is popularly known as sharan tal. As per the belief of local villagers, that it was named because of the history that the dutiful son shravan Kumar came here to fetch water to his blind Parents. Kings Dasharatha (father of Shri Rama) has mistakenly shooted shravan Kumar with his bows arrows as they thought there is a wild animal drinking water from the pond.

Shravan Chita: Shravan Chita is the so called place where the dutiful son shravan Kumar, was cremated. It was a mythological belief that the King Dasharatha, who was on a hunting expedition happen to be near to the spot where shravan Kumar went to fetch water for his blind parents. The spot is at a centre of the park when you enter from Kisli gate and moves towards Kanha. Large number of herbivores and carnivores animals and birds use to come here as the water availability in this pond is throughout the year.

Dasharatha Machan: While you are near the shravan tal, you can see opposite to it the mountain like structure called as shravan machan. As the Indian mythology says that from this point the doomed arrow to dutiful son Shravan Kumar. The Hill on which the machan existed is known as Macha Dongar.

(King Dasharatha used that machan as a hideout for hunting. The Machan is buit at a height on the trees, where they wait patiently for animals to pass by. It seems like an easy hunting technique, but it is not.)