Panna National Park is generally Known as White tigers and lots of reptile species, in this tour package you will cover these three National Park along with Jabalpur & Khajuraho. Package is well designed or suited for Kids, Couples and Family 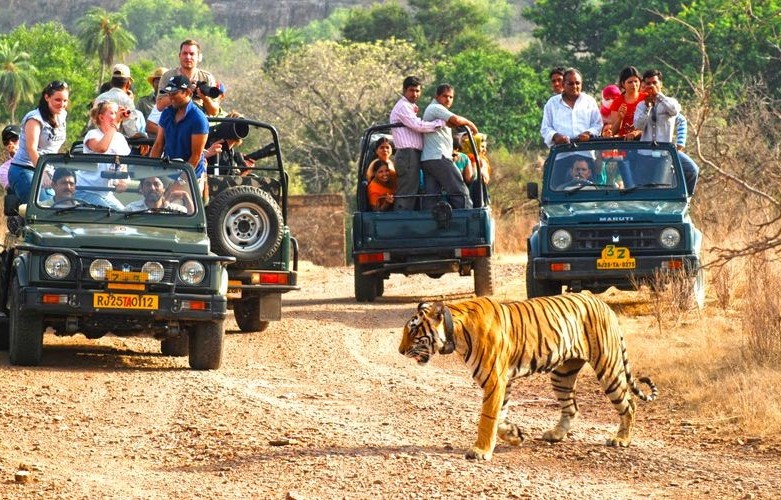 Holidaytravel.co provides you a chance to visit and enjoy these three famous National Parks which is generally known as Pride of Madhya Pradesh. Visit and admire the wildlife and see the beauty of Madhya Pradesh. All the National Parks are famous for their species Kanha National Parks is special for Tiger reserve planning.  All the national parks provide not only jeep safari they also provide Elephant safari, Birds watching and Floura and Fauna. National Parks can provide jeep safari twice a day in early morning and in evening. Elephant safari and birds watching center is available in the evening till 2 pm to sunrise. Visit and expand your holiday trip with wildlife and have a great chance to experience wild life.

Accomodation In Some Of The Hotels/Resorts

After arrival at Jabalpur airport or railway station and you will be transfer to hotel. After freshen up and get ready you will visit for famous places of Jabalpur which includes Dhuandhar Falls, Tilwara Ghat, Bhedaghat, After having a lunch in Kalchuri Residency Restaurant later you will visit Balancing Rocks, in the evening you will visit famous temples which are Gurdwara Gwari Ghat Saheb  and Chausat Yogini Temple, after darshan back to hotel.

Dhuandhar ( Niagra Falls of India) : It is a waterfall in adjoining part of Bhedaghat. It has a great force of water flow and a very photogenic spot. Here Narmada River passes through narrow passage and produces fog and sound. Dhuandhar can also be viewed from overview thorough rope-way drive. One can also do shopping of marble show-pieces in Dhaundhar local market.

Bhedaghat or Bheraghat : Most popular site attraction of Jabalpur city is Bhedaghat. It is 25 km away from main city and is a must visit spot for tourists visiting Jabalpur, Madhya Pradesh. Here one can enjoy boating in Bhedaghat on Narmada River in between gleaming marble rocks. Many bollywood movies have been shooted here like Ashoka, Jis Desh Me Ganga Behti Hai etc.

Chousat Yogini Temple: Temple is in between Bhedaghat and Dhuandhar. Chousat Yogini is a temple of about 95 beautifully carved statues of Yogini’s. It is top of the small hill with no entrance charge. Here inside the main temple Lord Shiva & Parvati can be seen together on riding on lord Nandi (bull). Main temple is encircled by 95 statues of yogini’s. Temple is estimated to be built in 11th century by Kalchuri rulers.

Tilwara Ghat : This ghat is a another ghat of Narmada river. In Tilwara ghat, some ashes of Mahatma Gandhi were put in holy Narmada River. Here people usually come to take bath in river. Tilwara ghat in Jabalpur has many temples also to visit.

After post breakfast you will proceed for Kanha national Park which is 132 km far away from Jabalpur. After reach Kanha resort and have delicious lunch then you will go for evening jungle safari which starts by 2 pm onwards till sunrise, in the evening back to hotel.

Early in the morning you will visit for morning jungle safari which is start by 6 am to till 11 am, after completing safari you will come back to hotel for breakfast and rest of the day free at your leisure, in the evening you may visit for bird watching.

Kanha Jungle Safari:  Kanha jungle Safari is a better way to visit in whole jungle with better guide line and with better safety. Safari is available twice a day in jeep and jungle safari was divided in zones to cover all the jungle by tourist At present there are four safari zones in which tourists can undertake their safari drives. At at particular safari drive, tourists can visit only one zone and to visit atleast once to all 4 zones, he/she has to undertake minimum 4 safari drives. Earlier Kanha & Mukki are the offered zones. Later Sarhi zone was opened for visitors and count is increased to 3 safari zones in Kanha. Among these 3 safari zones, Kanha zone, which is most popular among tourists, was declared as premium safari zone whose safari ticket cost is more than other two non-premium safari zones. Later one more new safari zone was introduced with the name of "Kisli Safari Zone". It is mainly derived from the areas of Kanha safari zone. Safari starts from sunrise to sunset and safari timing are as follows

After breakfast you will proceed for Bandhavgarh national park which is 260 km far away from Kanha national park. Before reach Bandhavgarh you will stop for lunch in any good restaurant later you will continue your driving to Bandhavgarh after reach checkin to hotel and rest of the day free at your leisure.

Elephant Safari: Bandhavgarh National park is filled with so many ranges of wild life species. dpuf The “tiger tour” is the star attraction of Bandhavgarh and the best way to enjoy the sightseeing of this majestic animal is on the back of the elephant. We call it the elephant safari which has gained immense popularity among the animal lovers who love to praise the beauty of the jungle and the glorious beasts of Bandhavgarh. The safari guide will definitely be there to assist you. An elephant safari at Bandhavgarh is really the perfect option for a safe and most enjoyable jungle tour.

After breakfast you will proceed for Panna national park which is 135 km far away from Bandhavgarh. After reach checkin to hotel and rest of the day free at your leisure. Overnight stay at Resort

Early in the morning you will visit to tiger reserved for jungle safari, later come back to hotel for breakfast and rest of the day free at your leisure.

After breakfast you will proceed for Khajuraho which is 45 km far away from Panna national park. After reach you will visit famous places which include Khajuraho Temples, State Museum of Tribal and Folk art, Ajaigarh Fort, Kalinjar Fort after lunch in restaurant you will come back to hotel. Overnight stay at Resort

Ajaigarh Fort:  Ajaigarh fort is in Panna district and is around 80 kms from Khajuraho and is situated on Vindhya hill.There are two  tanks carved out in rocks named after famous Indian rivers Ganga and Yamuna. There is Chandela temple and 3 ruined Jain temples inside the fort.

Kalinjar Fort:  Kalinjar fort is located in Banda district of Uttar Pradesh around 120 km from Khajuraho.The fort is located at an elevation of 1200 feet overlooking the plains of Bundelkhand. Famous temple of temple Neelkanth Mahadev is located inside fort premises.The shiva lingam here is made up of darke-blue stone of height around 1.5  and has three eyes.There is  sculpture of Kala-Bhairava, about 24m in height and 17 feet broad. The figure has 18 arms, and is ornamented with the usual garland of skulls, with snakes earrings and snakes armlets and the skeleton goddess Kali 1.5 in height.

Khajuraho temple: A UNESCO world Heritage site, Khajuraho  is Known as ONE OF THE SEVEN wonders of India, It is famous for Hindu & Jain Temples, these temples are made of sandstone.the stones were held with mortise and tenon joints together. Total of 85 khajuraho temples were built during the Chandela dynasty rule between 950 and 1130 of which around  25 remains now and are preserved by Arachaeological department.

After breakfast you will drop to Khajuraho railway station for onwards journey. Tour and service ends here.

Bandhavgarh is spread over an area of 448 sq kms and has vast stretches of grasslands spread over 32 hills. It boasts of the one of highest density of tigers in the world, besides Healthy population of Cheetal, Sambhar and Barking Deer. Bandhavgarh Fort scattered with remnants of the past forms the heart of the park and offers breathtaking views of the forest all around it. The park has been divided into three major zones named as Tala, Magdi and Bamera out of which the Tala zone attracts major number of tourists by offering the tiger sighting opportunities. The park authorities are also focusing on the Magdi Zone by providing more opportunity to spot tigers. Elephant shows are also organized in Magdi zone of the Bandhavgarh national park to increase the chances of spotting the elusive king of the jungle. Most of the facilities are provided like jeep safari twice in a day with proper guideline and safety, Elephant safari, floura and fauna. click here to know more about Bandhavgarh

Kanha National Park is a tourist destination where mostly people come to attract wildlife as well as they provide all the facility towards the attraction of tourist. The forest of the Kanha Tiger Reserve was inhibited by two indigenous tribes of Central India. The Kanha Tiger Reserve is being occupied by two major sanctuaries, the Hallon and the Banjar Sanctuaries. Respectively covering the area of 250 sq km and 300 sq km, the Kanha Reserve together forms a greater area of 1,949 sq km. Mostly tigers are found here and from Kanha national park they provides us jeep safari and bird watching. Click here to know more about Kanha National Park

The Panna National Park is home to some of the best wildlife species in India and is one of the better Tiger Reserves in the country. The park is known worldwide for its wild cats, including tigers as well as deer and antelope. The landscape of this rocky and uneven terrain is covered by scrubby vegetation and grass. Fauna of this park includes, apart from the Tiger, Wolf, Chital, Sloth Bear, Chinkara and Sambhar. Click here to know more about Panna

Things to do in National Parks

Things which not to do in National Parks

How to reach Jabalpur

Jabalpur by Air: Jabalpur Airport is approximately 10 km far from the main city. You can use any of the public transport to reach there. Air India, Kingfisher Airlines, Spice jet are some of the airlines which offer regular services to travelers.

Jabalpur by railways: Railways are the best option to reach various other locations comfortably and is also considered as the cheapest mode. Rail network is well linked to Bhopal, Jaipur, Patna, Hyderabad, Kolkata, Ahmedabad, New Delhi, Lucknow, Chennai and many more.

Best time to visit National Park: National Park is a unique experience where you can visit and see the wild animals with proper safety, Best time to visit from the 15th of October to till 30th of June. As per the climate of Central part of India, the peak season for National Park is during winters, say October to March. The period between November and February is excellent for visiting national parks as the rain fall during monsoon rejuvenated all the nature & vegetation. Particularly this period is best for bird watching.