Halong Bay is situated in the Northeastern part of the country that is Henoi in Veitnam. Ha Long Bay spread in 1,553 square kilometres and includes 1,969 islands of various sizes. Halong is one of the World Natural Heritage, which explains the fascination of tourists everywhere to come visit Halong. Halong Bay is170km away from Hanoi capital which is easily accessible.

It was twice recognised as a UNESCO Heritage Site in 1994 and 2000,and October 13 (VNA) – Ha Long Bay in Hanoi have been named among 50 can’t-miss attractions with their foods and experiences in Asia by US news website Business Insider. In 2011, it was voted one of the seven New Natural Wonders of the World. 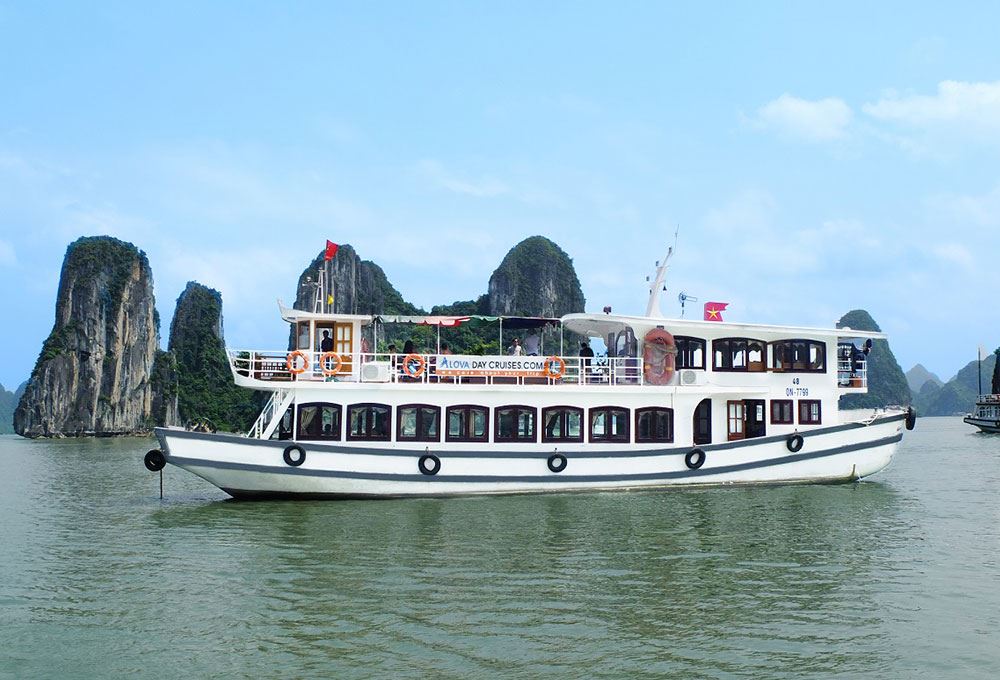 Spend your holiday with lot of enthusiasm and explore the beauty of Halong Bay on the immersive boat tour is the best option for your trip. The best way to enjoy and explore the untouched beauty of Halong bay by boat trip and sail around to get captured in your pleasant memories. Also enjoy free time to explore on your own via kayak or bamboo boat. Excellent cruise of Halang Bay are must-try experiences Halong bay is the place where you feel peace of mind calm of heart and relax for your life ever. It is the perfect attraction for nature-lovers to enjoy on the weekend. Visiting of Halong bay boat trip will bring you a different feeling that you will never forget.

Arrive at Noi Bai International Airport, met & greeted by Holiday Travel Tour Guide. Transfer to hotel for checking in (Time of checking in is at 14h00). Overnight in Hanoi.

AM: Sightseeing a Ho Chi Minh Complex {Include Ho Chi Minh’s Mausoleum (closed Monday and Friday year-round and throughout September to November), Ba Dinh square, Presidential Palace (Outside only), Uncle Ho’s House on stilt, One pillar pagoda} and Vietnam Military History Museum. Free at leisure until transferring to the Noi Bai International Airport for your departure.

Halong has two main seasons: hot with sporadic rain from April to September and cool with some chilly wind from October to March.

which lead to cold weather, getting colder in Jan, Feb.  not ideal for swimming.  strong monsoon are also visible this time. This time rises as high season of Halong Bay tourism. The temperature is from 12ºC to 20ºC

As other part of the Northern country, the Bay is sunny and hot for swimming under clear blue sky. There is light rain in some days and even unexpected typhoon that might cancel your trip. Temperature rises from 25ºC. Summer promotion rate can be found during this time.

Spring in Hanoi is short and often from the last days of January to March or first days of April. Spring coming means a new lunar year is coming. People in Hanoi as well as other places in Vietnam are eager to enjoy the holiday – the biggest holiday and festival of Vietnam every year.

Best time to visit Halong Bay is the periods September – November and March – May are ideal for a trip to Halong Bay. The dry climate and pleasant temperature will enable you to enjoy all activities offered on board while making sightseeing as perfect as it could be.  The peak season falls on December and January - the months that coincide with Christmas and New Year break.

Other months that also see busy lines of travelers include October, November, February, March and April. During these months, the weather is also most suitable to visit Halong Bay.

Hoan Kiem Lake: also known as Ho Guom, is a lake in the historical center of Hanoi, the capital city of Vietnam. The lake is one of the major scenic spots in the city and serves as a focal point for its public life.

Cyclo Trip: a great way to admire street life and the city’s beautiful architecture on our way to the fascinating Old Quarter - 36 ancient streets where peddlers continue to trade as they have done for centuries.

Water Puppet Show: An ancient Vietnamese form of entertainment, which enables the puppeteers to control their active marionettes by levers hidden under the water. Water puppet skits generally enact ancient folklore and legends that are rural in origin, and the theme of water is often present, as it defines so much of Vietnam’s landscape

Ho Chi Minh Complex: To be consisted of consisted of Ho Chi Minh’s Mausoleum (closed Monday and Friday year-round and throughout September to November), Ba Dinh square, Presidential Palace (Outside only), Uncle Ho’s House on stilt, One pillar pagoda.

Vietnam Military History Museum: focuses on boosting its scientific research, improving the quality of museum work in order to meet the ever-increasing requirements of domestic and foreign visitors, and attaches great importance to the work of collection; in preparation for the construction of the new museum which will prove worthy  of being a national museum of the Vietnamese military history.

Hanoi Old Quarter: At the beginning of the 20th century the city consisted of only about 36 streets, most of which are now part of the old quarter. Each street then had merchants and households specialized in a particular trade, such as silk traders, jewellery etc.

Ha long Bay: In 1962, Ha Long Bay was recognized as a vestige and beauty spot of national significances by Ministry of Culture and Information of Viet Nam and was also recognized as a world national heritage site twice by UNESCO Organization. The first time, in 1994 for the exceptional and universal value of the landscape and the second time in 2000 for the special value of geology and geomorphology.