Arrive at Indore Airport / Railway station, meet our representative & transfer to the Hotel. Located in the heart of the Malwa Plateau, Indore is possibly the best place to catch a glimpse of the life and times of the Holkar Dynasty. It is here that you find a fine amalgamation of art and culture of several regions and era in its various attractions, including palaces and temples. Later, proceed for the city tour of Indore. This includes the Central Museum, Gomatgiri, Kanch Mandir, Khajrana, Lal Bagh Palace. Overnight stay at Indore.

This morning after breakfast you will drive to Bhopal, the city of lakes is one among the famous tourist destinations of Madhya Pradesh. It presents a harmonious blend of Hindu and Islamic cultures with a perfect symphony of North Indian and South Indian traditions. The uniqueness of this historic city lies in the fact that, perhaps it will be the only Indian city which was ruled over by the powerful Begums over centuries. Innumerable monuments, exquisitely carved temples, stupas, forts and palaces are dotted all over the State. The evening is at leisure or your can explore the textile markets on your own.

Leave early morning for Van Vihar National Park, developed and managed as a modern zoological park, following the guidelines of the Central Zoo Authority. The animals are kept in their near natural habitat.Van Vihar is unique because it allows easy access to the visitors through a road passing through the park, security of animals assured from poachers by building trenches and walls, chain-link fence and by providing natural habitat to the animals. Back to Bhopal again.

After breakfast you will drive to Vidisha, sightseeing in vidisha are Bijamandal Temple and Maladevi Temple, Lohangi Pir, Khamba Baba, Udaygiri Caves  etc.

The Van Vihar National Park provides varieties of herbivorous and carnivorous species for the tourists. All carnivorous animals are kept captive and feed everyday with meet and other food items. Around 4:30pm everyday carnivorous are feed which is the best time to visit the park.

Carnivorous Animals - At park you will come across various carnivorous animals like tiger, white tigers, panther, lion, hyena, alligators, pythons, bear etc. All these carnivorous are kept captive at the national park.

Herbivores - All Herbivores are free to move inside the park therefore tourists will have to hire rickshaw or jeep to travel through the park to get their glimpse. Herbivores species present at the Van Vihar includes Cheetal, sambhar, blue bull, blackbuck etc.

Bird watching - Over 200 species of birds have been identified at the Van Vihar National Park. Tourists will come across several migratory birds during the winter season. Best place for bird watching in the park is the lake. Bring your camera and start taking photographs of the beautiful birds at the park.

Park remains open 7 am to 7pm during April to September and 8am to 6pm during October to March. Park remains closed on Tuesday.

The park also supports a variety of Ghariyal, Crocodiles, Mugger, Turtle, Star tortoise and Python. According to the lUCN's Red list, the gharial is the most threatened of all crocodilian species.

Van Vihar National Park also boasts of a large variety of avifauna. About two hundred species of birds have been listed in different parts of Van Vihar which includes migratory birds. Around 60 wide variety of colorful butterflies and insects can be seen at this park.

The forests here are tropical moist deciduous type. They are interspersed with swamps. The park consists of moist Sal bearing forests, dry Sal bearing forests, moist mixed deciduous forests without Sal, cane. The Bel, Amaltas, Babul, Reunjha, Doodhi, Lendia, Saja, Amla, Tendu etc are the common trees in and around the park. Besides Aak, Karonda, Besharam and a variety of other Shrubs and Herbs are also founds in Van Vihar.

Van Vihar situated in Bhopal city, adjoining Shyamla Hills area of the city, it can be reached by reaching Bhopal city, that is the capital-city of Madhya Pradesh. The park is spread adjacent to Bhopal lake where you can go for visit after paying for entrance ticket.

By Flight: Bhopal city have its own airport with name "Raja Bhoj Airport" (IATA Code: BHO) which has connectivity with cities like Indore, Mumbai,Delhi, Raipur, Hyderabad, Ahmedabad etc. It is about 15 Kms. from city center. Similarly it is connected with other important cities like Indore, Jabalpur, Gwalior etc. of state through air-taxi service. And Van Vihar is Just 16 km away to the Airport.

By Train: Bhopal city have two main railway stations: Habibganj & Bhopal Junction. And Van Vihar is odd 8 km away to the main railway station of the city; Railways of Bhopal come under West-Central Railway Zone in India. Railway station code for Habibganj is HBJ & Bhopal Junction is BPL. Here Habibganj Railway Station is the first ISO9001:2001 certified railway station of India. City is on the main Delhi-Chennai & Delhi-Mumbai rail track. There are regular express trains to Delhi, Agra, Jaipur, Gwalior, Jhansi, Ujjain, Sanchi, Indore, Jabalpur, Katni, Chittorgarh, Aurangabad etc. Bhopal is directly connected to Amritsar & Jammu in the North. There is a daily Shatabdi Express via Agra, Gwalior, Jhansi to Bhopal. In case you are not able to find train from Bhopal to any other destination, you may consider Itarsi Junction (Railway code:ET) also for searching the train. It is about 85kms from Bhopal city but has large number of train options for other parts of India.

Best time to visit van vihar national park in summer season from March to July and in winter season from October to March. Visit the park around 4:30pm to get a chance to see most wild animals at the park. Noon

Van Vihar is National Park located adjacent to Upper Lake of Bhopal city at Madhya Pradesh in Central India. It is spread over an area of 4.43 sq. km. area and was declared as a National Park in year 1983. Although it is a declared National Park, but on visit you will find it more a Zoological Park. It has been developed and managed as a zoological park in which wild animals were caged in a their natural surrounding. It is a important part of Bhopal local sightseeing.

This land is under strict protection, due to it has now transformed into an island full of greenery surrounded by habitation. Van Vihar serves as green lung for the capital town of Madhya Pradesh. It harbors herbivores like Chital, Sambar, and blue bull under free ranging condition and the animals like tiger, lion, leopard, hyena, crocodile and gharial under captive condition. The landscape of the area has led to the designing of enclosures in a fashion that serves the objective of fostering a positive man-animal relationship. Central Zoo Authority (CZA) has granted recognition to Van Vihar as medium size Zoo during q994. The adjoining upper lake adds immense beauty to the landscape of Van Vihar. The lake enlivens the park particularly when thousands of migratory birds land in the lake at the onset of winter. 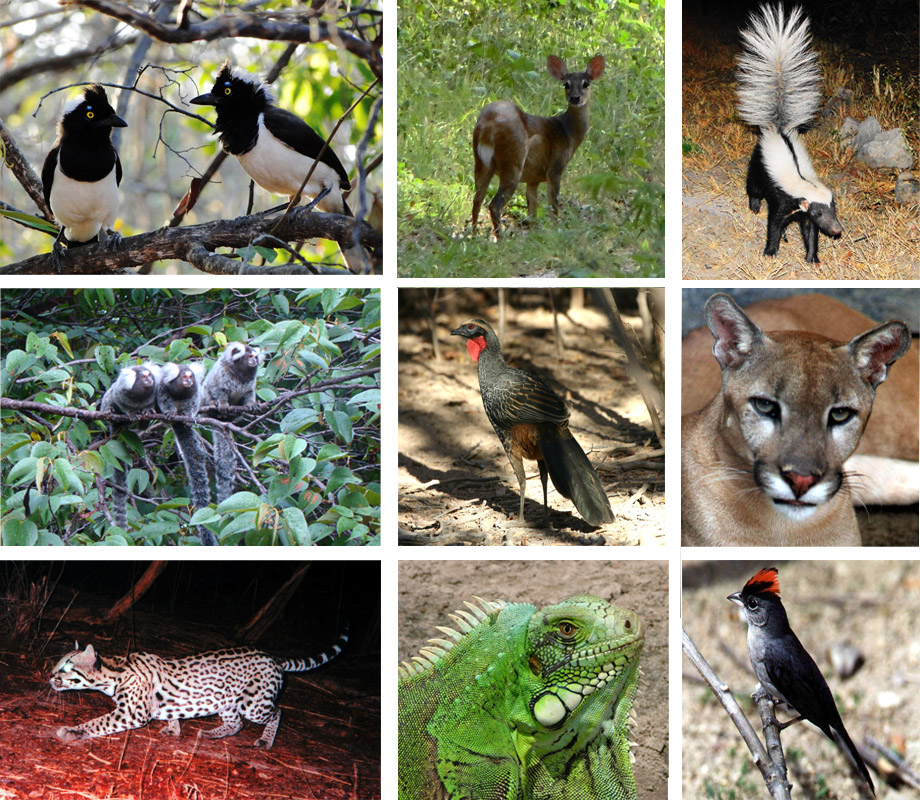 Kanch Mandir: The Kanch Mandir, as the name suggests, is a temple which is entirely made up of glass and mirrors. It is also known as the Seth Hukamchand Temple, as it was built by the "Cotton King" Sir Hukamchand Seth in the early 20th century. It is primarily a Jain temple and is a wonder in glass.

Rajwada: Rajwada is the historical palace of the Holkars. It was built about two centuries ago and is located near the Chhatris in the main square. It is a seven storied structure, which serves as the living example of the grandeur of the Holkars. Rajwada stands in the centre of the city. 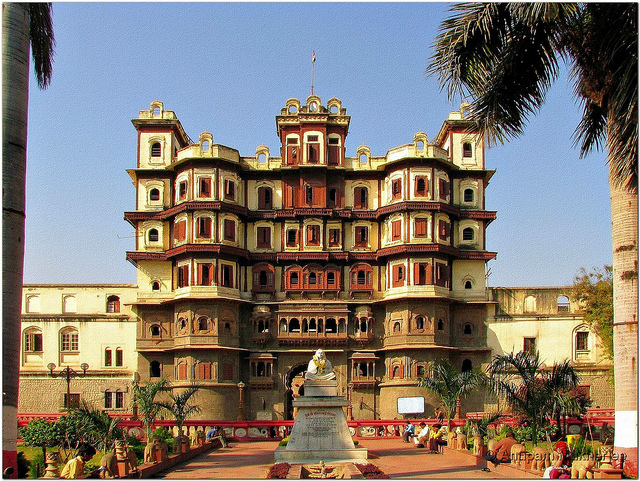 Moti Masjid: Moti Masjid of Bhopal bears a prominent resemblance to the Jama Masjid of New Delhi. Built by Sikandar Jahan, the daughter of Kudsia Begum, in 1860, this staggering mosque brilliantly displays the heights attained by Islamic art and architecture during the Nawabi era. Fabricated with red sandstone, the highly stylized structure of the mosque is typical of Muslim architecture. It has an arresting marble façade, with two red minarets crowned by golden spikes.

Upper and Lower Lakes: These lakes highly contribute towards beautifying the landscape of Bhopal and are credited as the artwork of Raja Bhoj. The Upper Lake is 6 sq. km. in area and is divided from the Lower Lake by an over bridge. MP Tourism's Yacht Club provides facilities and warrants exciting trips by sail, paddle and motor boats at the Upper Lake. 'Van Vihar' (safari park) and the fish-shaped aquarium near the place also contribute towards its popularity amongst the locals and tourists.

Laxmi Narayan Temple: Also known as Birla Temple, Laxmi Narayan temple was built by the Birlas and is commemorated to the Hindu deities, Laxmi & Vishnu. This sandy-yellow edifice, embellished with idols of many Hindu Gods and Goddesses, poses a magnificent sight. Birla Museum, adjoined to its precinct, is a storehouse of art and artifacts that date back to the 12th century. The beautifully carved archway and the trailing green lawns of the place make it a famous tourist draw of Bhopal.

Udaygiri Caves: Situated between the Betwa and Beas River, Udaygiri caves is an excellent example of beautiful rock carvings that dates back to the Gupta period of regime. This archaeological site is now governed by the ASI. The temples called Udaygiri are located within the cave and have idols belonging to various dynasties such as Kumaragupta I, Chandragupta I, etc. The most attractive feature is the depiction of Lord Vishnu reincarnating as the boar- Varaha.

Bijamandal: This is a famous temple called Vijayamandira temple and is said to have been constructed around 11th century. This temple is a great example of having stood the test of time and seeing the rise and fall of many dynasties.

Heliodorus Pillar: Often referred to as Khamba Baba, it is a column that was built around 110 BC. The beautiful inscriptions on the main pillar give a great account of our great history.