This Tour Package deals with Visiting a Khalsa Heritage Complex at Anandpur Sahib, which was build  to commemorate the  birth of the Khalsa Panth, which. It was here in 1699,on Vaisakhi Day, that Guru Gobind Singh, founded the Khalsa Panth by baptising Panch Pyaras, this very event changed Sikh history and tradition like never before.

Khalsa-Heritage-Center-by-Safdie-Architects is Hailed as a "wonder in the making", the Khalsa Heritage complex had been conceived on a scale with global perspective and located amidst rolling hills on a sprawling 100-acre estate inspired by the nearby Himalayan Mountains.

The Heritage complex.... Virasat e Khalsa is located in the state of Punjab and is sited overlooking the town. Divided into two sections that straddle a ravine, the memorial is joined by a 540-ft long pedestrian bridge over a network of reflecting pools. The western side, which is connected directly to the town, features exhibition galleries, a two-level library centred around a grand reading room that overlooks the water gardens, is a facility for storing rare archival materials, and a 400-seat auditorium.

The eastern side houses permanent exhibitions presenting Sikh history, religion, and culture. Rising from the cliffs below, the building is clad with locally-sourced sandstone and evokes the fortress cities of Rajasthan, Gwalior, and Punjab. The galleries are arranged in groups of five and reference the Five Virtues of Sikh religion. Themes such as the earth and sky, mass and lightness, and depth and ascension are represented in the museum’s sandstone towers and reflective, dramatic sweeping roofs.

The credit of design and structural plan goes to Moshe Safdie, the internationally acclaimed Boston-based Israeli architect. Safdie began designing the museum way back in 1999 and finally saw his efforts come to fruition at the inauguration. A button to unveil the museum’s inaugural plaque as theVirasat-e-Khalsa monument rose out of the Shivalik hills of Punjab. 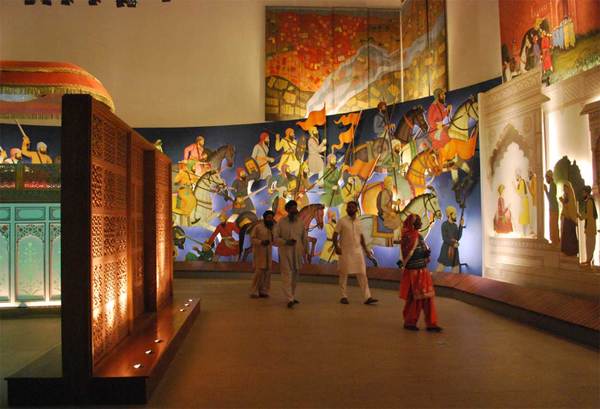 The two main complexes are joined with a connecting long ceremonial bridge. The canopy on this bridge is an architectural experiment and is situated in the opposite direction of the sun and does not provide any shade.The western complex houses an auditorium with a seating capacity of 400 with temporary exhibition galleries and a library, housing all journals, magazines, books and periodicals on Sikhism.

The eastern complex has the Flower Building and a wing called the Boat Building or the Heritage Section. The experience begins at ‘Panj Pani’ —The Boat Building of the complex houses the largest hand-painted mural in the world, depicting the past and the present of Punjab, as seen in its villages and towns and cities ....It took almost three and half years to complete the interiors which includes paintings, murals and around 400 artist were involved in it including designers.

Contrary to the tradition of domes which crown the sacred Sikh sites, the roofs of the Museum are concave-shaped receptors facing the sky. Sheathed in stainless steel, they reflect the sun’s light towards the Gurdwara and the Fort.

The roof of the Flower Building is shaped in the form of five petals - representing the Panj Piaras .

Each petal will house an exhibit tracing the life history of all the Gurus from birth to attaining salvation/ martyrdom. These will be permanent exhibits. The petal at the highest altitude will have information and exhibits on Guru Granth Sahib.

The museum, is truly Virasat e Khalsa, there are 25 Gallaries to mesmerise you.

visitors are guided by the auto-trigger audio guides, available in English, Hindi and Punjabi. ‘Auto-trigger’ implies that as you walk into any gallery and the audio guide plays content specific to the area.

The voiceover has been rendered by actress Divya Dutta, Surjeet Pattar and Kabir Bedi respectively. The first five galleries depict the spiritual aspects of the Panth by making use of research material, stories and technology.

Visitor is greeted with the thought-provoking concept of Ik Onkar. The Mool Mantar will echo all around this exhibit.

This exhibit, with special sound effects, is situated in a drum-like building where lights will create an image of Ik Onkar and an audio message will highlight the core principles of Sikhism.

Then starts a mesmerizing journey into the lives of the first Five Gurus in the five petals of the flower building. These five petals tell tales from Guru Nanak to Guru Arjan.

The first petal will have the milieu of the times Guru Nanak was born in, tracing his life through the far-flung travels (udasis) he undertook. Further, there will be galleries depicting the lives and contributions of Guru Angad and Guru Amar Das.

One of the galleries is divided into two, by recreating a baoli in the middle, to highlight the latter‘s life work. It will have leather and shadow puppets with painted murals in background.

The gallery in the fourth petal contains exhibits on the contribution of Guru Ram Das, including the construction of the city of Ramdaspur, adding 11 ragas to the existing corpus of Gurbani, and the Laavan. The city of Ramdaspur has been recreated in an embroidered form.

Around this central installation are shown stories related to the Adi Granth. Four doorways around it recreate different scenes describing the life and times of Guru Arjan.

There is another gallery depicting Guru Arjan's martyrdom in the form of a sculpture on the terrace. Here, the events around the martyrdom have been narrated in an evocative manner

There is also an exhibit, which will suggest the coming together of five elements - fire, earth, water, air and space.

The galleries at the lower level will chronicle the trials, tribulations and triumphs of the Khalsa, from Banda Singh Bahadar to immediately after Partition, when Sikh dynamism helped revive a trifurcated Punjab with its flamboyant energy and resilience.