South India Devi Darshan and Shaktipeeth Tour Package: Overview
The Goddess Kamakshi is in a sitting posture in the temple. This posture is called the Padmasana posture. The Padmasana posture is said to resemble a lotus. In the Yogic practice this resembles the form of meditation. The Goddess holds a Sugarcane bow on her left upper arm and Lotus, Parrot in her right upper arm. The Goddess also has divine chakras called Pasa and Angusa in her arms South India mainly Karnataka, Andhra Pradesh and Tamil Nadu consists of number of temples dedicated to Goddess Durga and her manifestations. Millions of devotees visit these temples every year to seek blessings from the Goddess every year. This 9 day trip itinerary will take you across the most the most religious and historical locations in and around Karnataka, Andhra Pradesh and Tamil Nadu. These places are pristine and divine where you can spend a lot of time exploring the religious side of South India that will prove an experience worth it when you return from the trip In this package, we offer 8 Nights-9 days package for Chamundeshwari - Srisailam - Dharamsthala - Kanchi Kamakshi devi - temple tour from Mumbai/Banglore/Delhi/Kolkata 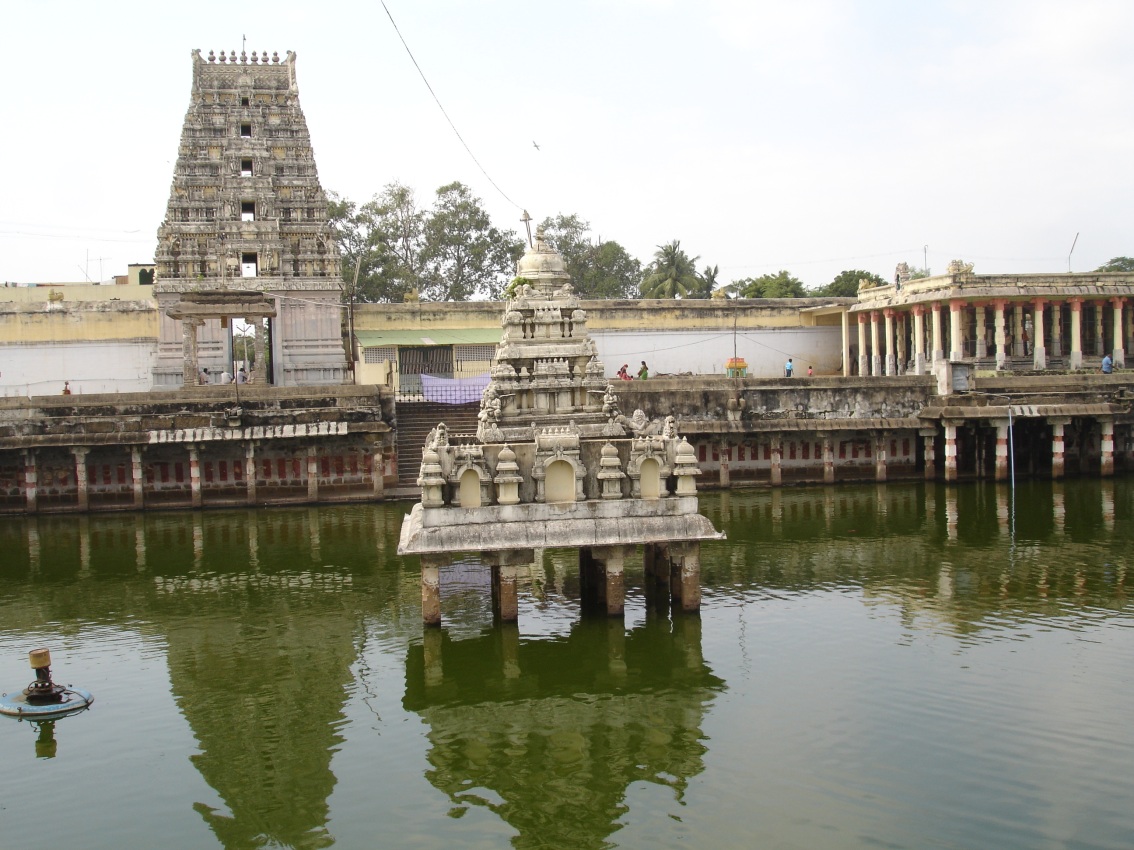 Top Highlight of the Tour

Our representatives will pick you from Bangalore airport/railway station and will transfer you to Mysore where you’ll be checking in the hotel for stay. Later you’ll be visiting Vrindavan Gardens and Mysore Palace.
After which you’ll return to the hotel for overnight and dinner.

Wake up early morning visit the temple of Sri Saradadevi temple on the banks of river Tunga . Sri Adi Sankaracharya formed the 1st Dakshina peetam here. From here drive to Kateel Durgadevi temple and then to Dharamsthala for darshan of Shri Manjunath Swami.
Later return to your hotel in Sringeri for overnight and dinner.

Check out from the hotel in the morning and leave for Mangalore airport to catch the flight for Hyderabad where upon reaching you’ll be driven to Srisailam and shifted to the hotel for check in. Rest of the day will be free for leisure.

Visit Srisailam Jyotirlinga Temple - The Bhramaramba Mallikarjuna Temple located in Srisailam is one of the 12 Jyotirlinga temples dedicated to Lord Shiva. Near the Shiva temple is a Parvati Temple known as Bhramaramba Temple and is considered one of the 51 Shakti Peetha Temples.

Wake up in the morning drive to Alampur. Upon arrival visit the Jogulamba Temple that is very famous and is one of the Ashtadasha Peethams (18 abodes of Mother). After offering your prayers here proceed for Nava Brahma Temples are 9 temples dedicated to Lord Shiva. They date back to 6th-7th centuries CE.

From here return to your hotel in Srisailam for overnight and dinner.

Check out from the hotel in the morning and leave for Hyderabad from where you’ll be catching a flight for Chennai and will be driven to Kanchi for check in to the hotel. Rest of the day will be free for leisure.
Overnight and dinner in hotel.

Wake up in the morning and proceed for Kanchi Kamakshi temple where godess prevails in the form of Shakti.The goddess residing place in Kanchi is called as “Nabisthana Ottiyana Peetam”. The Goddess is called as “Sri Kamakshi”.

(Nabisthana Ottiyana Peetam)
After darshan of the goddess we’ll be visiting other temples in the town that includes Ekambareswarar Temple and Kailasanathar Templeboth dedicated to Lord Shiva and later return to the hotel for overnight and dinner.

Today you’ll be checking out from the hotel and leave for Chennai where you’ll be dropped at airport/railway station and you’ll trip shall commence.

The trip shall start from Mysore and it is very easy to reach here.

Mysore is 139kms to the south west of Bangalore. The state highway that connects these two cities is very well maintained. Travelling from Bangalore to Mysore by road is a pleasant experience and will take about 3hrs.

Mysore is connected with a number of trains to Bangalore. The superfast luxury train the Shatabdi Express connects Mysore to Madras. The quickest and most comfortable way to reach Mysore is via Bangalore.

South India Devi Darshan - Why you should choose this Package
This package is designed especially for tourists who want to explore the religious side of South India and explore the legend that consists of mighty Shakti Peeths with temples dedicated to Goddess Shakti. This trip will take you through the most beautiful temples holding historical and religious importance. We intend you to provide the best transport and stay experience covering the most romantic spots in the way.

The Kamakshi Temple is a famous Hindu temple dedicated to Kamakshi, one of the forms of the goddess Parvati. It is located in the historic city of Kanchipuram, near Chennai, India and is popularly associated with Sankaracharya, one of the greatest Hindu gurus.

The Meenakshi Temple in Madurai, the Akilandeswari temple in Thiruvanaikaval near Tiruchirappalli and this Kamakshi are the important centers of worship of Parvati as the mother goddess, in the state of Tamil Nadu. The temple was most probably built by the Pallava kings, whose capital was Kanchipuram, around 6

The main deity, Kamakshi, is seated in a majestic Padmasana, an yogic posture signifying peace and prosperity, instead of the traditional standing pose. The goddess holds a sugarcane bow and bunch of flowers in the lower two of her arms and has a pasha (lasso), an ankusha (goad) in her upper two arms. There is also a parrot perched near the flower bunch.

Kanchi Kamakshi temple is situated at about 5 acres of land and has four entrances. The main entrance of the temple has a Kalabhairavar deity on its left and the Mahishasura Mardini deity on the right. On the centre of the entrance you can see a huge Dwajasthampa. Moving further to the entrance of the Kamakshi deity you can see a Vinayaga deity. Moving on a straight line further, Goddess Kamakshi is visible.

Goddess Kamakshi is surrounded by deities of Ayyapan, Saraswati, Annaporani and Adisankaracharya on its outer prakaram.

The Goddess also has Varahi, Arupalakshmi Kalvarperumal (one of the 108 Divya Desam of Vaishanavities), Roopalakshmi and Arthanariswarar deities surrounding the sanctorum of Goddess on its Gayatri Mandapam.

I do recollect worshipping Varahi and Ardhanreeswar specially.

There is Santhanasthampam inside the prakaram of Goddess which is called the Nabisthan of the Goddess. There is a Srichakra Yantra (Sri Kamakoti Peetam) established by Jagadguru Sri Adisankaracharya in front of the Goddess deity.

This time I could very clearly see the sreechakara

There is also a temple tank inside the premises. Kamakshi temple has a close relation with the Sri Kanchi Kamakoti Peetam and its successive Sankarcharyas. The temple has a gallery of Adisankarcharya’s Life history inside the temple premises itself. Goddess Kamakshi is the main deity and the temple is ONE OF THE FIFTY ONE SHAKTI PEETAS. The temple is spelled as Nabisthana – Ottiyana peetam. The temple also has a golden Gopuram on the sanctorum of the Goddess Kamakshi deity which is visible to all devotees.

The Goddess also has a Chandraperai (a shape of moon like structure) in her forehead. The Goddess Kamakshi is situated in the middle of temple premises.

The Siruthondar Puranam of Sekkilar Peruman, written during this time, is aware of both the temples and mentions the original temple as the YOGA PEETA and the present Kamakshi devi temple as BHOGA PEETAM. The reference to the present Kamakshi Devi as Aram Purappaval (bestower of boons) by Sekilar Peruman is noteworthy, as the present name of the street in which this new temple is located in Kanchipuram is called ArapanakAra Theru.

The present Kamakshi temple too, has a Sri Chakra which was established during the 16th Century by NrusimhAdvari, of the famous dathamAnji family.

Also noteworthy is the fact that this new temple’s legend considers the Bangaru Kamakshi at Thanjavur as Dharmadevi This is the metallic counterpart of the stone image of Dharmadevi, which is at present at Thiruparuthikunram (Jina Kanchi) to where it was removed from this present Kamakshi (Tara Devi) temple after the conversion of the Jain Tara Devi temple into Hindu Sakta tradition has become stronger.

There is a stone inscription at the Jina Kanchi temple which explains this fact. There are strong evidences that Dharadevi was worshipped in the present day main shrine.

My note- Two kamakshi temple itself is a new information to me.