" Welcome to Land of Mowgli"

Watching wildlife and spotting tigers is really a rewarding experience and can be challenging too when you get a close up view of the jungle beasts. So gets opportunity to spotting these creatures to make your short break weekend exciting as well as quite amazing feeling. In this Kanha tour package you will enjoy the memorable stay between the Jungle with all comforts and eases.

The Kanha National Park is surely a paradise for the wild species that brings the natural habitat for them. A location which is filled with large varieties of fauna out of which the jungle is best known for tigers, Barasingha, the swamp deer and is famously called 'the jewel of Kanha'. This Park brings this loveliest creature of nature in its captivating serenity. Being famed as the major central Indian highlands, The lush sal and bamboo forests, grassy meadows and ravines of Kanha provided nspiration to Rudyard Kipling for his famous novel "Jungle Book".

This package starts from Jabalpur which is a nearest city to well connected with Raipur, Nagpur, Kolkata, Mumbai & Delhi by train so that every tourist can reach Jabalpur easily and later we will take you to Kanha National park from our source.

Hotels used in the Package

On arrival at Jabalpur railway station our representative will take you to Kanha National Park which is the most admiring destination for the varieties of fauna including the avifauna with almost 300 species of it.  After 4 hours drive reach the park and check in to resort. Later you may have delicious lunch. After that you may go for local tribe village tour, take photography at these places Rest of the day free at your leisure. Enjoy bonfire, tribal dance, indoor games and different activities at resort. Take dinner and overnight stay at resort.

After have tea/coffee in resort, start early morning visit from Kanha zone for Jungle Safari in open gypsy by 6 am. Our gypsy will pick you from resort for visiting wildlife which is the premium and richest zone in terms of biodiversity, mainly Royal Bengal Tigers with their amazing wildlife sanctuary. Morning Jungle safari ends by 10:30 am, later come back to resort and have breakfast.  At your leisure you may enjoy swimming, indoor games and different activities of your resort.

After post lunch, you will go for evening Jungle Safari starts by 2:30 pm in Mukki zone which is also a popular tiger safari zone of tiger reserve and it shares boundary with Khatia zone and also famous for its 90+ strong population of Royal Bengal tigers. After returning at resort about 5:30 pm and Tea/Coffee Biscuits would be served in the evening. Later have mouthwatering dinner and may enjoy bonfire, tribal dance. Overnight stay at resort.

Today after breakfast check out from resort and proceed to Jabalpur enroute visit Bhedaghat which is famous for White Marble rocks, here you can enjoy boat ride between white marble rocks then visit Dhuadhar waterfall. Later drop you at Jabalpur railway st/ airport for onwards journey.

How to reach Kanha National park

By Road: Nearest cities from Kanha National Park are Jabalpur, Raipur, Nagpur. Jabalpur & Nagpur is on National Highway-7 which connects Varanasi from Kanyakumari. Anyone can reach Kanha from these cities by surface transfers. Among them Jabalpur is the closest to Kanha Tiger Reserve i.e, about 165kms. and road condition is also favourable. Routes are as follows:

How to Reach Jabalpur

By Air: Jabalpur is connected by flight from capital of India i.e. New Delhi. Here daily flight operates between Jabalpur - Delhi. By small charter plane it is connected with Bhopal and Indore. Some more destinations are likely connect with Jabalpur in near future.

By Road: Jabalpur is well connected by road. National Highway-7 passes through Jabalpur that connects Varanasi to Kanyakumari. Nearby important cities connected to Jabalpur are Nagpur, Bhopal, Raipur, Khajuraho etc. By raod, you can go to any place in India by road. It has direct bus connectivity with cities like Varanasi, Allahabad, Raipur, Bhopal, Chattarpur (for Khajuraho), Kanha National Park, Chindwara, Sagor etc.

Things to do in Kanha National Park

The park is open from 15th of October till 30th June. Months of April, May and June are considered the best time to watch Royal Bengal Tiger and other creatures. During this time, we can expect of tigers as heat causes animals to remain close to water sources. Limited water sources will enable us to predict the animal location more accurately. During this time all Zones have good number of active water sources and the area have hills of sand-stone that retain water from long time and also felt cool during day time so Royal Bengal Tiger and other creatures sighting chances in these Zones are far better than any other tourist National Park. Close to water source, we may be lucky enough to find unusual spiting of Tiger making kill or resting in water etc.

The opening hours are scheduled to accord roughly with the seasonal variations in climate, as well as with the length of the day at different seasons. There is always a mid - day break, so that employees may eat lunch and rest and the animals may have respite to the jungle. The hours are subjected to change because of special conditions; if there is a heavy rain, the park tourism routes will be temporarily hazardous, or official activities such as census taking May scheduled. In practice, "sunrise" and "sunset" are interpreted “dawn" and "dusk" with vehicles being admitted at 6:30 A.M., for example, if sunrise occurs at 6:50. The gate attendants tend to be stricter about exit times, since darkness follows sunset quite rapidly at this latitude. 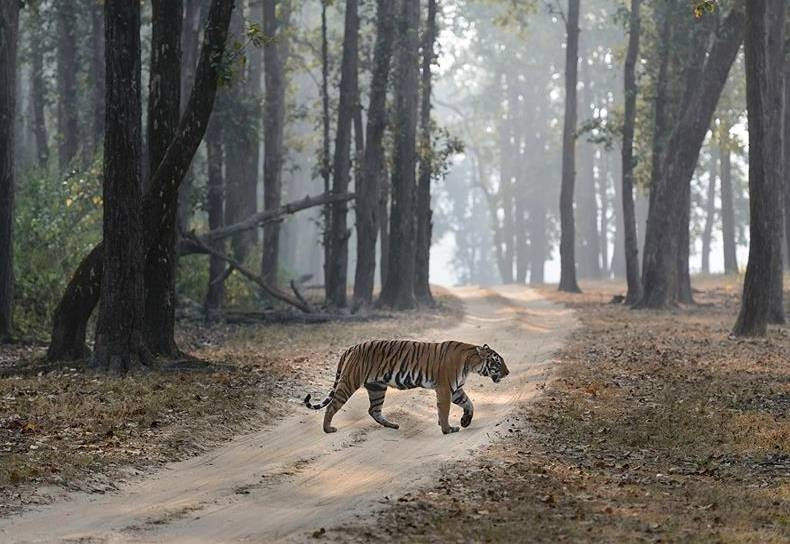 Bamni Dadar: It is also known as the sunset point is quite popular among tourists. Most tourists visit Bamni Dadar to get the wonderful view of the setting sun and this is also one of the beautiful area in the park, Animals that can be sighted around this pont are typical of the mixed forest zone: sambar, barking deer, gaur and the four-horned antelope etc

Sonf Meadows: Sonf village was the first one to be moved out from Park area for making spreading the tiger reserve in Kanha. As the people being moved away from the reserve, within few years few barasingha descended here and they began to breed successfully. The thick and extensive cover of tall grasses protected the barasingha fawns from predators. Similar to Sonf, there are few other meadows also where the earlier villages were there.

Kanha Meadows: The Kanha Meadows is one of the most popular visit place in Kanha.  As many times tourist have spotted the tiger hunting its prey. In Large meadows you can witness the herbivores, and therefore carnivores are also there.

Shravan Tal: There is a small water pond in the reserve which is popularly known as sharan tal. As per the belief of local villagers, that it was named because of the history that the dutiful son shravan Kumar came here to fetch water to his blind Parents. Kings Dasharatha (father of Shri Rama) has mistakenly shooted shravan Kumar with his bows arrows as they thought there is a wild animal drinking water from the pond.

Shravan Chita: Shravan Chita is the so called place where the dutiful son shravan Kumar, was cremated. It was a mythological belief that the King Dasharatha, who was on a hunting expedition happen to be near to the spot where shravan Kumar went to fetch water for his blind parents. The spot is at a centre of the park when you enter from Kisli gate and moves towards Kanha. Large number of herbivores and carnivores animals and birds use to come here as the water availability in this pond is throughout the year.

Dasharatha Machan: While you are near the shravan tal, you can see opposite to it the mountain like structure called as shravan machan. As the Indian mythology says that from this point the doomed arrow to dutiful son Shravan Kumar. The Hill on which the machan existed is known as Macha Dongar.

(King Dasharatha used that machan as a hideout for hunting. The Machan is buit at a height on the trees, where they wait patiently for animals to pass by. It seems like an easy hunting technique, but it is not.)

04 WD Open Jeep safaris are the best way to observe wildlife at the thick & lush green forest of Kanha National Park. 04 X 04 Open Jeeps with groups of tourists, individuals accompanied by an experienced naturalist are allowed into the park at fixed timings during early morning and afternoon. The jeep has to follow a fixed route and leave the park by the end of the appointed time. Many popular wildlife experts and wildlife photographers have observed and photographed the largest cat family member of Kanha National Park by doing jeep safaris. Since the jeeps follow fixed routes, the animals are not unduly disturbed.

At Kanha National park in a single day jeep safari can be done 02 times. One in the early morning hrs & the other one in the late afternoon by using 06 seater open vehicle. In each vehicle 6 passengers were allowed to travel along with one naturalist and one driver. Before entering into the National Park one has to complete some necessary paper formalities at the entrance gate regarding vehicle details, naturalist details, visitor's details etc. All these formalities take almost 15 to 20 minutes.

Visitors are advised to drive slowly and with care. Drawing at the national park is different from driving in city roads or highway. A deer on the road or a tiger by the roadside, if without interruption provides more pleasure than the one that run away. Sighting wild animals in Kanha is exciting. All the animals at the national park are wild. Always take services of officially authorized guide during game drive as they are local, experienced & well familiar with the surroundings & can take you to the right places in right time to see the exceptional wildlife of Kanha National Park.