Shekhawati Heritage Havelies is located in Jhunjhunu distt., and it is famous as well as most visited place to see and admire knowledge of history in your life. Shekhawati stands for an Open-air art gallery of Rajasthan. Holidaytravel.co designed this packge to visit and get induge in other small attraction towards art and cultural activity of Rajasthan. In this package you will cover famous hawelis of ancient time with better accommodation. Package is well designed or suited for Family, Kids or Couples. 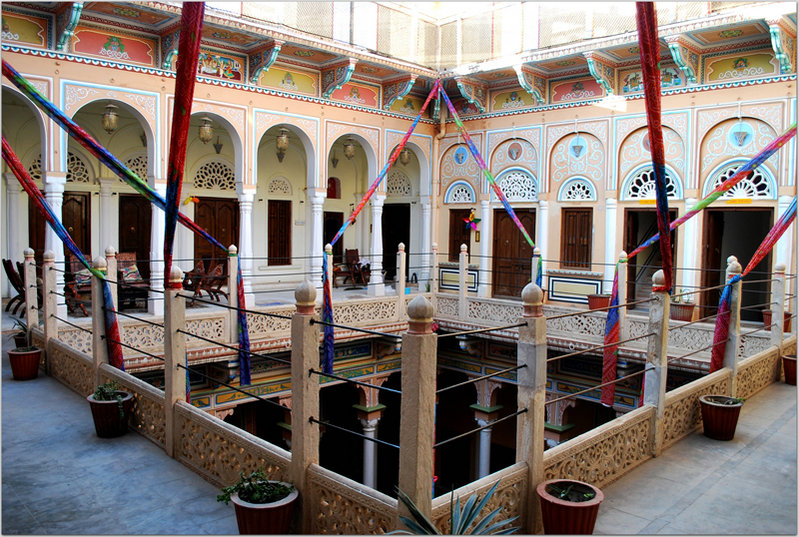 Why you must visit Shekhawati Heritage Havelies

Shekhawati Heritage Havelies is a good weekend destination for foreigners to visit and they were always in a new search to visit and express their views. It is located at Mandawa dist and it is specialized for its art and activity. Most of the tourist was come here to visit and see the open art activity which is sculptural art which is painted of the walls of Havelis.  Holidaytravel.co derived you to visit and explore your holiday and see the historic art and cultural activity and admire the knowledge which is spread thorugh this Havelis.

After arrival at Jaipur airport or railway station meets with our representative and they will pick you with warm welcome and transfer to hotel. After some rest and freshen up, in the evening you will visit nearest market for shooping. Overnight stay in Hotel.

Mandawa Fort Tour: It was built by Thakur Nawal Singh Bahadur in 1755. In the zenana (women's quarters), various rooms offer different themes. One room has antique murals, another has a marble fountain, while the turret room has walls that are 7 feet (2.1 m) thick. Diwankhana, the formal drawing room, is decorated with family portraits and an array of antique armour.

Dundlod Fort Tour: It dates back to 1750 AD. Steps lead up to the Diwan Khana, which is furnished with portraits, hangings, and period furniture. It also houses a library and portraits done in the European style.

After breakfast you will be visit some more famous places which are Bhagton ki haveli and Snehi Ram Ladia Haveli. After visiting these two places back to hotel for lunch, later you will be free at your leisure. Overnight stay with dinner at  Hotel

After breakfast you will be full day free at your leisure enjoy your day by envolving in Hotels activity like horse riding, camel riding. Overnight stay with dinner at Hotel.

After breakfast you will  drop to Jaipur airport or railway station for onwards journey. Tour end

Mukundgarh Fort Tour: It was built by Thakur Mukund Singh Ji. He established Mukundgarh in 1859 and the fort was built in a traditional style and spreads over 2 acres (8,100 m2) of land. It has several courtyards, overhanging balconies, arched windows and corridors.

The Roop Niwas Kothi Palace Tour: It was established as a large country house by Rawal Madan Singh, former ruler of Nawalgarh. It is popularly known as Rawal Sab Ki Kothi in Nawalgarh. It sits on over 100 acres (0.40 km2) of land. The facade is painted in ochre that lends it dignity. The hotel organises horse safaris and has stables at the back side. 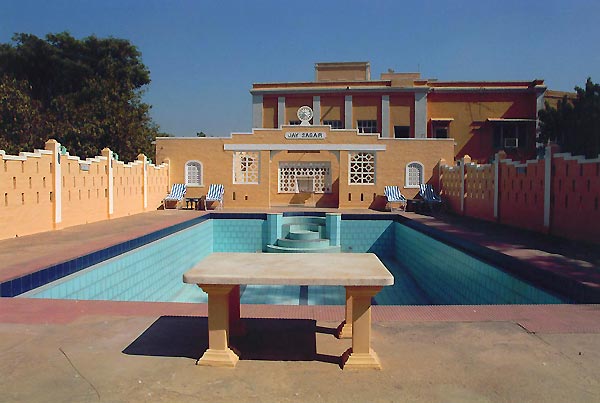 Narain Niwas Castle, or Mahansar Fort: It was was built in 1768 by Thakur Nahar Singh. It has an imposing entrance reached by flight of stairs. It also has many wall paintings.

In Shekhawati, frescoes were initially introduced by Shekhawat Rajputs in their forts and palaces. The towns in Shekhawati are known for their painted havelis. This region has been recognised as the "open art gallery of Rajasthan" having the largest concentration of frescos in the world.

The Marwaris from Marwar was an influential business community in Shekhawati, and they prospered until the beginning of the 19th century, due to the caravan routes that crossed the area to reach the ports of Gujarat. However, from 1820 onwards, many left their families behind and migrated to Calcutta, Bombay, and Madras, which were gaining importance as main trade centers where they had great financial success.

Between 1830 and 1930, they erected buildings in Shekhawati, their homeland, as evidence of their success. As the ultimate symbol of their opulence, the Marwaris commissioned artists to paint those buildings. 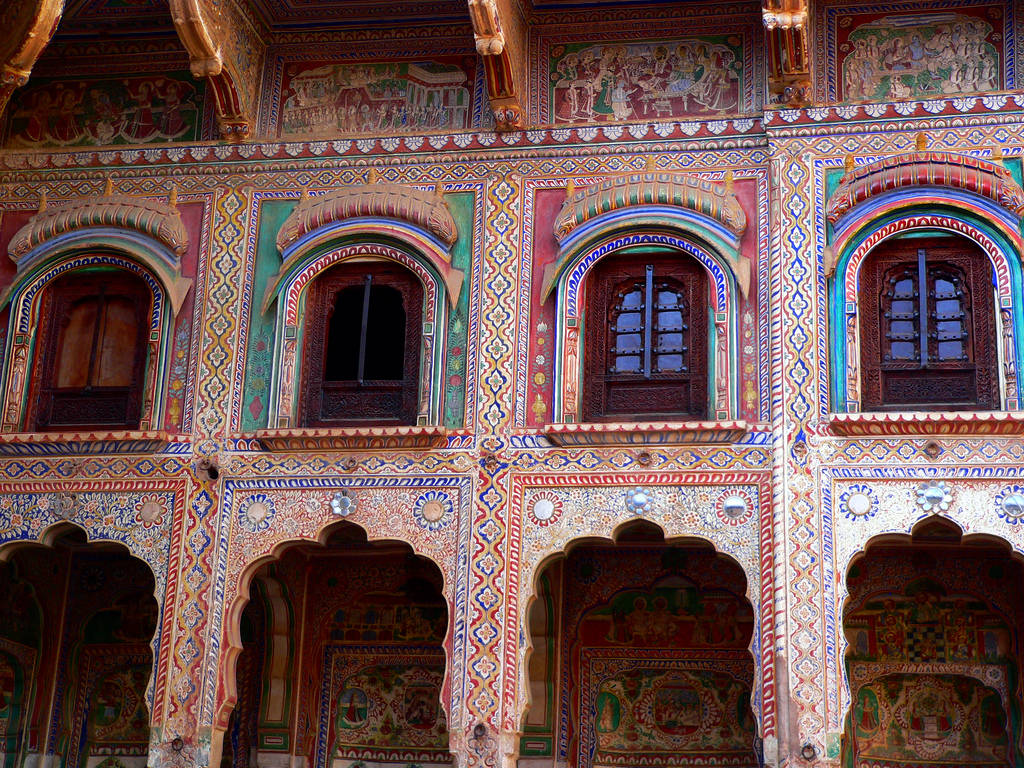 Most of the buildings of the Shekhawati region were constructed in between the 18th century and the early 20th century. During the British occupation, traders adapted this style for their buildings.The havelis are noted for their frescos depicting theological and historical themes. The frescos include images of gods, goddesses, animals, and the life of the lords Rama and Krishna, profusely painted on the havelis in this region.

How to reach Shekhawati Heritage Havelies

By Train: there is a good connectivity from Jaipur to Jhunjhunu and it is connected with major rail routes. If one is coming from Jaipur then the route goes like this, Jaipur>Ringus>Sikar>Jhunjhunu.

By Bus: Shekhawati is connected with State highway no. 8, 37 and 41. These roads provides easy and direct accessibility to Jaipur, Delhi and Bikaner. State transport corporation buses as well as luxury coaches ply on these routes on frequent basis. Taxi cab facility from both Delhi and Jaipur is also available. Roads are in good condition compared to average experience in India.

The summers in Rajasthan (Jaipur, Jodhpur, and Jaisalmer) are hot and humid with the average temperatures rising up to as high as 45 degrees Celsius at times. This phenomenal rise of the mercury, which takes place between the months of April to June sees the golden sands of the Thar Desert glistening under the scorching rays of the mid day sun.

Best time to visit Jaipur, Jodhpur, and Jaisalmer (Rajasthan) is a winter season (October - February), because the summer season is the hottest season of Rajasthan, but in winter temperature is down. In Jaisalmer the summer temperatures could go up to 47° C and down to minus 1° C in winter.  So, that winter season is the best season to visit Jaipur, Jodhpur, and Jaisalmer.

The mercury dips to as low as a single digit number and even zero in winters while in summers, the town experience scorching heat with the temperature going as high as 50 degree Celsius and plus. Starting from October, the heat begins to subside and the weather becomes pleasant. Hence, it is considered the most tourist friendly time too visit Mandawa.

How To Reach Mandwa

Mandawa by Flight: Mandawa is 190 kms from Jaipur Airport. Light vehicles and buses can be hired to reach Mandawa from here. Nearest Airport: Jaipur International Airport (JAI) - 151 kms from Mandawa.

Mandawa By Road: Mandawa is well connected by road to Delhi, Jaipur, Jodhpur, Bikaner and other major cities of the Shekhawati region.

Mandawa By Train: Mandawa is just 30kms away from Jhunjhunu railway station. Jhunjhunu station is crossed by a couple of selected trains and the station is more connected to Delhi, Jaipur and Bikaner.