This Sikh pilgrimage tour package takes you to the holy land of Guru Gobind Singh ji, Known as The Huzur Sahib, which is  One of holiest of the India's  Panj Takhts.

One of the five Takhat Sahibs which are places of primary importance to the Sikhs, the other four being the Akal Takhat at Amritsar, Takhat Keshgarh Sahib at Anandpur, Takhat Patna Sahib in Bihar district and Takhat Damdama Sahib in Talwandi Sabo, Bhatinda, Punjab.

There rarely can be a place more significant, and even holier, than where a great philosopher has lived and breathed his last, spending years together in the service of mankind. Sachkhand Shri Hazur Abchalnagar Sahib in Nanded where Guru Gobind Singhji, the tenth & last Sikh gurus, held his final congregation.

Nanded has often found a mention on tourism itineraries for being home to many Sufi shrines. The faithful flock here regularly to seek blessings and one of the frequently visited shrines is that of Sachkhand Shri Hazur Abchalnagar Sahib. This is one of the most important gurudwaras of the Sikhs where the ‘Takhat’ is located and where the tenth guru of the Sikhs, Shri Guru Gobind Singhji, breathed his last on October 7, 1708.

Foreseeing that his earthly stay was near its end, the Guru asked for the Guru Granth Sahib to be installed there and this came to be known as the ‘Takhat Sahib.’ The present building of the Takhat Sahib was constructed by Maharaja Ranjit Singh. He decorated the gurudwara with marble and gold plating during his regime. The complex of the Takhat Sahib is spread over several hectares.

Hazur Sahib is a holy place where everyone should seek blessings of mighty God. One feels utmost peace in this heavenly adobe of God.

In the Afternoon, Proceed for the Aurangabad Site seeings

Bibi Ka Maqbara - Mini Taj of Deccan: Situated about 3 km from the city is Bibi Ka Maqbara, the burial place of Aurangzeb's wife, Rabia-ud-Durrani. It is an imitation of the Taj at Agra and due to its similar design, it is popularly known as the Mini Taj of the Deccan. The Maqbara stands in the middle of a spacious and formally planned Mughal garden with axial ponds, fountains, water channels, broad pathways and pavilions. Behind the mausoleum is located a small archaeological museum.

Panchakki (water mill): Housed in the Dargah complex of Baba Shah Musafir, it is a 17th-century water mill situated at a distance of 1 km from the city. An intriguing water mill, the Panchakki is famous for its underground water channel, which traverses more than 8 km to its source away in the mountains. The channel culminates in a mesmerising 'artificial' waterfall that powers the mill.

Gates in Aurangabad: One of the things that make Aurangabad stand out from the several other medieval cities in India are its 52 'gates' each of which have a local history or had individuals linked with them. Not many people are aware of the fact that Aurangabad is also known as the 'City of Gates'.

Ajanta Caves: The Ajanta Caves in Maharashtra, India are 31 rock-cut cave monuments which date from the 2nd century BC. The caves include paintings and sculptures considered to be masterpieces of both Buddhist religious art (which depict the Jataka tales)as well as frescos which are reminiscent of the Sigiriya paintings in Sri Lanka.

Ellora Caves: Ellora is an archaeological site, 30 km (19 mi) from the city of Aurangabad and aWorld Heritage Site. Ellora represents the epitome of Indian rock-cut architecture. The 34 "caves" – actually structures excavated out of the vertical face of the Charanandri hills – being Buddhist, Hindu and Jain rock cut temples and monasteries, were built between the 5th century and 10th century.

Daulatabad Fort
Daulatabad: Daulatabad ؛ meaning “City of Prosperity”, is a 14th-century fort city in Maharashtra, India, about 16 kilometers northwest of Aurangabad. The place, was once as known as Deogiri. Starting 1327, it famously remained the capital of Tughlaq dynasty, under Muhammad bin Tughluq (r. 1325-1351), who also changed its name, and forcibily moved the entire population of Delhi here, for two years, before it was abandoned due to lack of water.

After breakfast proced to Nanded. Visit to other religious places on the way. Check-in at hotel in Nanded and visit to Takht Sachkhand Sri Hazur Sahib Ji . Have Darshans and Guru ka Langar at the gurudwara.

Popular shrine of Takhat Sachkhand Sri Hazur Abchalnagar Sahib in Nanded is popular for being the court and congregation place of the 10th Guru in 1708 AD.This is the same site where Maharaja Ranjit Singh constructed the building of Takhat Sahib in the year 1830. The complex of Takhat Sahib covers several hectares of land along with two other shrines that have been constructed here.

One of the shrines has been named as Bunga Mai Bhago ji, which consists of a large room where the holy book of Guru Granth Sahib has been seated along with other historical weapons like steel quoits, a steel bow, an arrow, a dagger sized sword and a mace.

In the two-storey building, the interiors are artistically ornamented in the style of Harmandir Sahib, Amritsar. The walls of Angitha Sahib have been covered with golden plates. The dome is polished and on the pinnacle is a ‘kalash’ made of gold-plated copper. Some of the sacred relics of Guru Gobind Singh are also preserved here. These include a golden dagger, a matchlock gun, an archer with 35 arrows, two bows, a steel shield studded with precious stones, and five golden swords.

A laser show has been started at Gobind Bagh near the main gurudwara. In this show the lives of the ten gurus are briefly but very beautifully described. The show has been conceived and directed by Jasbir Singh Dham while the music and commentary is by ghazal singer Jagjit Singh. The show timings are 7:30 pm to 8:30 pm daily

Overnight at hotel in Nanded.

Overnight Stay at Hotel in Nanded

Day 04: Back to Aurangabad

After breakfast leave for Aurangabad Airport and leave for home with holy blessings from Guru Maharaj.

For International Tour package to Sri Huzur Saheb, Package starts by picking up from Aurangabad airport which is approx at 55 minutes flight from Mumbai. You will land at Mumbai Airport from your india/international destination and catch connecting flight to Aurangabad. 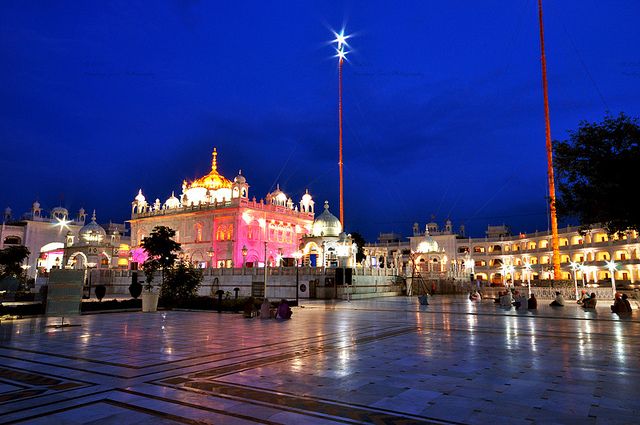 Takhat Sachkhand Sri Hazur Abchal Nagar Sahib or Huzur Sahab or Huzur Sahib is the principal shrine at about half a Kilometer from the left bank of the river Godavari in the city of Nanded, Maharashtra India. It marks the site where the 10th guru of Skihs, Guru Gobind Singh Ji breathed his last. The gurudwara within the complex is known as Sach-Khand which means "Realm of Truth".

Sikhism, or known in Punjabi as Sikhi, is a monotheistic religion founded during the 15th century in the Punjab region of the Indian subcontinent, by Guru Nanak Dev Ji and continued to progress through the ten successive Sikh gurus (the last guru being the holy scripture Guru Granth Sahib Ji).
Sikhism is the fifth-largest organized religion in the world, with approximately 30 million adherents. Adherents of Sikhism are known as Sikhs (students or disciples). This system of religious philosophy and expression has been traditionally known as the Gurmat (literally 'wisdom of the Guru'). Punjab state in India is the only state in the world with a majority Sikh population.
Sikhism is a spiritual, social, and political system of beliefs which considers spiritual life and secular life to be intertwined Guru Nanak, the 1st Sikh Guru established the system of the Langar, or free kitchen, designed to safehold equality between all people and express the ethics of sharing, community, inclusiveness and oneness of all humankind.
Sikhs are expected to embody the qualities of a "Sant-Sipāhī"— a saint-soldier. Which means to love God, meditate on God, keep God in the heart, feel God's nearness and also be strong, courageous and ready to fight to protect weak people from cruel unjust attackers. One must have control over one's internal vices and be able to be constantly immersed in virtues clarified in the Guru Granth Sahib.
Guru Nanak Dev Ji described living an "active, creative, and practical life" of "truthfulness, fidelity, self-control and purity" as being higher than a purely contemplative life. According to Guru Nanak, the aim is to attain the "attendant balance of separation-fusion, self-other, action-inaction, attachment-detachment, in the course of daily life", the polar opposite to a self-centered existence. In Sikhism there is no dogma, priests, monastics or yogis.

Satsriakal is the slogan. Sikhs greet souls by saying Sat Sri Akal to enhance its virtues. This remembers one and others to live with truth, achieve all treasures and merge in Eternity. Satsriakal prospers spiritual values of Sikh scriptures and its practical explanation. The Satguru mediates conciliating sounds as Gur Prasaad to achieve the True Wisdom of God. This technique Japu converts a mortal into pure Khalsa by providing him the elixir at Amrit Vela.
Sat means truth, Sri is an honorific word and Akal (or Akaal) means the timeless being, God and thus the phrase can roughly be translated to, “God is the ultimate truth”.

How to Reach Nanded Gurudwara

Air
Some airlines offer service from Delhi to Nanded and Mumbai to Nanded.

Rail
Sachkhand express is a special super fast train running directly from Amritsar to Nanded. Currently Nanded railway line is connected to Mumbai via Manmad and to Hyderabad via Secunderabad.

Road
Nanded is 650 kms east of Mumbai by road. It is about 4-5 hours drive from Aurangabad and 11 hours from Pune. Nanded is about 250 kms from Hyderabad. Several passenger bus services operate out of Nanded providing easy overnight connectivity with almost every major city in Maharashtra.

About Hazur Sahib Nanded Hazur Sahib In Nanded, also called as Takht Sachkhand Shri Hazur Abchalnagar Sahib and also known as Abchal Nagar, is one of the five takhts ("thrones", seats of..

Aurangabad Tourist Guide   Aurangabad Overview Aurangabad is a city in the Aurangabad district of Maharashtra state in India. The city is a tourism hub, surrounded by many historical..

0 Hotels
4 Packages
View Details
Tell us what you are looking for?
We will be very happy to help you.