Morena is situated in the Chambal valley. Distt. Morena has a few archeological spots with some monuments from the Mahabharat era to the medieval age. These monuments are the part of the country’s rich cultural heritage. Meaning of Morena :- The name, Morena is derived from the mor + raina means the place where Peacock is Enormously found. Morena, which has an identity of being home to perhaps the largest number of peacocks in the India. Morena is also world Famous for the top World Famous archeological spots and monuments (Noorabad ka Pool, Fort of Sambhalgarh), from the Mahabharat era to the medieval age. Thousands of Tourists & archeological lovers throng Morena to spend time in the famous Ruins.

Mitalwali is situated in the north of Naresar, there is a sixty four Yogini temple situated on the hundred feet high mountain. It is a wonderful circular construction of 170 feet radius on the style of Delhi's parliament house. Attached to circular verandah there are sixty four rooms and a big courtyard in the temple. In the centre of the temple there is the circular temple of Lord Shiva.

Bateshwar is situated 25 km from Morena and very near to Padavali at the UP border. It is known for ruins of beautiful temples within woods. Lush green beauty make it a magnificient place to go for nature lovers. Most of these temples belonging to 8-10th century are dedicated to Lord Shiva.

Pickup from Gwalior railway st. and proceed for Morena which is 40 km away from Gwalior. Upon arrival checkin to hotel and after get ready you will visit for local sightseeing of Morena i.e. Kakan Math, Jain Temples, The fort of Sabalgarh, Archeological Wonder and by evening back to hotel.

After breakfast proceed for Mitawali Padawali Bateshwar which is 25 km away from Morena. After reach Mitawali visit some sightseeing then proceed for Padawali Temple and Bateshwar Temple. By evening back to Morena and Overnight stay in Morena.

After breakfast you will visit for other local sightseeing of Morena i.e. Tomb Ganna Begum, Pahadgarh (Cave paintings in the cave shelters), Likhichhaj, Nareshwar-Norar and Nurabad (The Monuments of Mughal Period). Later come back to hotel and Overnight stay at Morena

After breakfast check out from hotel and drop you to Gwalior railway st. Tour Ends

How to reach Morena

By Road : Morena is situated on the national highway no.3.The roadway connects all the parts of the state and nearby states such as Rajasthan, Uttar Pradesh with the city. The City is situated at the heart of india and you can reach anywhere in india through the very smooth national highway no. 3. One can get buses from Morena to cities like Agra, New Delhi, Gwalior, Indore etc.

By Train : Morena is well connected by train services to all parts of the country including metros like Delhi, Mumbai, Chennai, Pune, Hyderabad, Jaipur, Indore and other major cities, direct connectivity by train are available to these cities . Express train such as the Bhopal Express, Taj Express and Bhopal Shatabdi and many more stop at Morena. Morena is located in between Delhi Bhopal Railway route, it takes 4 hours to reach Delhi and 6 hours to reach Bhopal from Morena by train.

By Air : Gwalior is the Nearst airport of Morena, only 50 kms away.

Kakan Math : The famous Shiv Temple is known as the "Kakan Math" It stand on a spot two miles away from Sihoniya in the north west of Distt. Morena. It is said that Kakanmath was built by king KirtiRaj to fulfill the will of Queen Kakanwati. It is 115 ft. high and is built in the Kajurho style.

Jain Temples in Morena : Sihoniya is a holy place of the Jains. In the east of the village, there are the ruins of the Jain temples of the 11th century A.D. In these temples there are statues of the Tirthankars such as Shantinath, Kunthnath, Arahanath, Adinath, Parshvnath and others. The main temple has three statues : Shantinath, Kunthnath and Arhanath of 10 to 15 ft. in height. They are of 11th century A.D.

The fort of Sabalgarh : The Sabalgarh fort is situated about 70 km from Morena on Morena-Sheopur road. It is accessible by road. Sabalgarh was founded by a Gurjar named Sabal. The fort here was built by Karoli’s Yaduvanshi ruler Gopal Singh in the 18th century A.D. The Sikarwar Rajputs occupied the fort prior to 1750 A.D. The Marathas snatched it from them and gave it to the ruler of Karoli again. It remained under their possession till 1795 A.D.when KhandeRao captured it due to lack of proper management in the fort, Maharaja Scindia gave it to John Baptiset Filose.

Archeological Wonder - Sabalgarh : The fort is built on a 100-feet high hillock. It has four entrance gates. The Haveli of Nawal Singh inside the fort is a fine example of Rajput architecture. The fort has a long series of bastions. Amongst the monuments of the medieval age the fort of sabalgarh is worth visiting. The beautiful ‘Bandh’ built behind the fort in the Scindia period has made the whole scene most fascinating.

The foundation of Sabalgarh was laid by a ‘Gujar’ named Sabla in the past. Construction of the fort on a somewhat high cliff was made by Gopal Singh, the Raja of Karoli. Sikandar Lodhi sent a big army to hold control over this strongly built fort. The Marathas in their campaign of northern India again won it and gave it back to the king of Karoli. But in the year 1795 A.D. it was again snatched away from him by Khande Rao whose big house still stands there. During the regime of Lord Vallejali Daulat Rao Scindia (1764-1837) lived in this fort of Gwalior. It was seized by the English in the year 1804-5. In 1809 the area around this fort was added in the kingdom of Scindia.

Tomb Ganna Begum: The place is about 25 from Gwalior on Agra-Bombay road. There exists a tomb on the road from Noorabad to railway station. It is called the tomb of Ganna Begum. Built on a 21x21m rectangular and 01m high platform the tomb has a 2.5 meter wide verandah. It has lattice and pillars. The tomb has small chhatris built on its roof. Cunningham wrote in his report that the tomb of the widow of the mischievous Wazir Ghaziuddin of Sarai was built in 1775 A.D. Ganna Beghum was the daughter of Ali Kuli Khan of Irani royal family. The Mughal emperor Mohammad Shah is said to have fallen for her beauty. The place is important in local history, as the Begum was the wife of the Wazir of Noorabad, which was under the Mughals.

Pahadgarh (Cave paintings in the cave shelters) :  Twelve miles away from Pahargarh in the south east there is a chain of 86 caves and cave shelters. They are said to be contemporary of cave shelters of 'Bhim Baitka' of Bhopal. In the beginning of civilisation people got shelter in these caves. Seeing the scene of men and women, birds and animals, hunting and dancing in the cave paintings it appears as if human art flourished in the valley of Chambal in the pre historic period and it searched undiminishing colours for its expression. 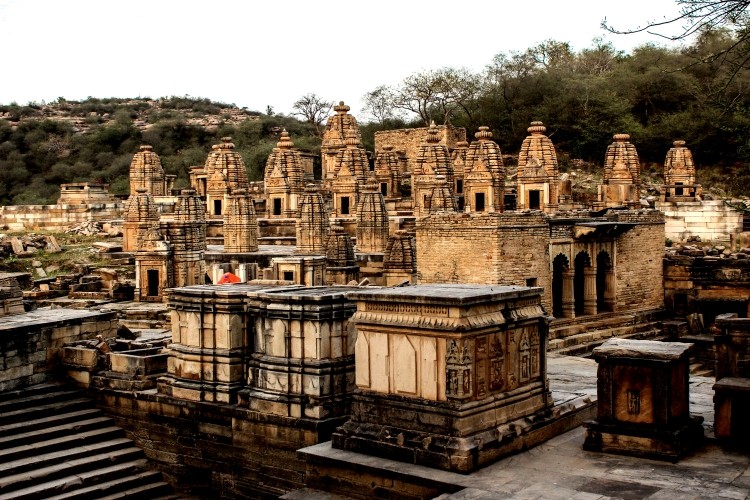 Likhichhaj :  Amongst many cave shelters on the banks of river Asan there is Likhichhaj which has remained a centre of attraction for a very long period. Likhichhaj means a hill bending onward like a balcony. In its natural pillarless verandah there are many pictures drawn in the mixed colours of geru and khariya. Neechta, Kundighat, Baradeh, Ranideh, Khajura, Keetya, Siddhawali and Hawamahal are other worth visiting caves or cave shelters.

Nareshwar-Norar:  Jaleshwar of 8 th to 12th century is Norar of today. Here many temples were built. Out of them twenty one temples are still standing on three sides of the mountain. In them Jhankies in the style of pratihar Nagar, and rapid have been exhibited. On the mountain there is a rare tank with stairs which supplies water to all of them. The tank has been made by cutting out the rocks of the mountain. There are some statues of different deities.

Nurabad (The Monuments of Mughal Period) :  In 1527 A.D. this area came under the control of mughal emperor Babar. Noorabad was founded in the times of Jahangir, the grandson of Babar. The ‘Phizi Saraya‘ in the name of ‘Saraya Chhola‘ and the bridge over the river Kuwari near Piparsa were built by Motimad Khan the sardar of Aurangzeb in the mughal period. The fort like the saray of Noorabad the bridge over the Sank with minerates and the artistic tomb of Gona Begum, the widow of Gyasuddin, the wagir of Alamgir constructed behind the saray are worth visiting. They were famous for their beauty and poetic expression.

After Naga period, the Gupta empire was established in this area. The 'Gotra' of the emperors of the Gupta dynasty was 'Charan'. 'Gharon' village was inhabited near modern Padawali. Around Gharon there are the ruins of several temples, houses and colonies. This new area of population is known as Padawali because it is surrounded by several hills. Here was a magnificent ancient Vishnu Temple which was later converted into a big 'Garhi'. The terrace, the courtyard and the assembly hall of this temple are the 'epitome' of ancient culture. The standing statue of a Lion on the ruined gate seems to say that there was a time when he used to watch the temple with his companion at its gate. More than fifty monuments of different kinds can be seen at Padawali up to the valley of Bhuteshwar.

In the north of Naresar, there is a sixty four Yogini temple situated on the hundred feet high mountain. It is a wonderful circular construction of 170 feet radius on the style of Delhi's parliament house. Attached to circular verandah there are sixty four rooms and a big courtyard in the temple. In the centre of the temple there is the circular temple of Lord Shiva. 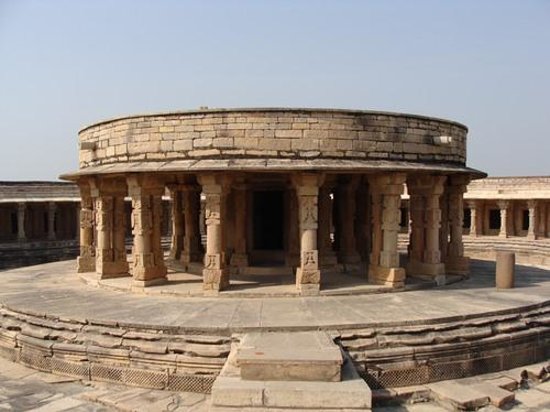 It is situated 25 km from Morena town, is an archaeological site comprising about 200 ancient shrines in Morena district in Madhya Pradesh. This site is located on the north-western slope of a range of hills near Padavali, a village about 30 km from Gwalior. The shrines of Bateshwar temple-complex are dedicated mostly to Shiva and a few to Vishnu. The temples are made of sandstone and belong to the 8-10th century CE. They were built during the reign of Gurjara-Pratihara Dynasty, 300 years before Khajuraho temples were built.

Raj Palace Hotel is a human truth, a symbol of Indian Hospitality. We treat our guest as good as "GOD" and try our best to satisfy the guest at our level best. Hotel is also onr of those to keep the same standard. It has 20 luxury AC rooms and all are well furnished and designed to give you utmost comfort. The rooms are with attached bathrooms, colors TV, Hot & Cold water supply, Telephone and Refrigerator.

This is the best budget hotel in morena and also nearby lots of open space for functions and parties with the great delicious food.