Dhyunsar Mahadev Temple is a popular Hindu Temple which is commonly known as Sada Shiv Mandir/ Shiv Tilla by tourists coming from different parts of the world. The temple is placed on a hilltop with a spectacular view on all sides. The Shiva Lingam at this temple is in the form of Maa Parvati and lord Shiv. Chintpurni Temple is 33 km from Una and dedicated to Mata Shri Chhinnamastika Devi and Mata Chintpurni Devi. This Temple is one of the 51 Shakti Peeths in India The Jwala ji devi temple is one of the most popular places of pilgrimages in India and is counted 9th amongst the 51 Shakti Peethas, it is said that “Tongue” of Ma Sati fell. The temple is dedicated to Ma Durga and she is manifested in the incarnation of Jwala(Flame) at this place. The Jwala ( Flame) is emerging from nine different rocks named after the goddesses- Mahakali, Unpurna, Chandi, Hinglaj, Bindhya Basni, Maha Lakshmi, Saraswati, Ambika and Anji Devi. 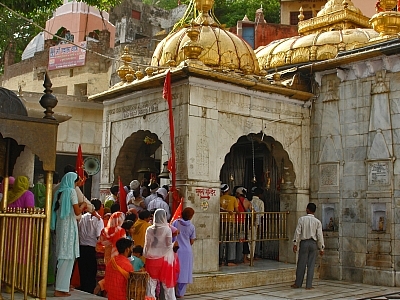 Note :- Don'ts for the Chintpurni Mata pilgrimage :- It is also said that if you want to travel to Jwala ji devi directly from Chintpurni devi, you should not take prasad from chintpurni mata to Jwala ji devi. All prasad must be consumed before proceeding to jwala ji devi

Maa Jwala Ji Temple: One of the oldest known pilgrimage destinations of Northern India, Jwala Ji Temple is around 32km South-West of Kangra and esteemed by the devoted Hindus of the country. There are several other temples dedicated to Goddess Jwala Ji, among which the one in Kangra district is believed to be the most auspicious. The temple is located in Jwalamukhi Town of Kangra. The main attraction of Jwala Ji Temple is the eternal flames representing the image of deity, Jwala Ji. The four cornered sanctum-sanctorum of the temple is set with a small dome and a square central pit where the sacred stone is found. The main flame of this temple keeps burning constantly. It is one of the 51 Shakti Peethas found in different corners of the South-East Asia. It is believed that the tongue of Goddess Sati fell on this ground. Offering coconut is a popular practice in Jwala ji Temple.

Dhyunsar Mahadev: Dhyunsar Mahadev temple is a famous Hindu temple. It is situated in the Bahi village of una , Himachal Pradesh. During the period of Pandavas in their Agyat vaas (Exile Period) was construct this temple. It is an ancient temple. This temple is also called as Shri Sada Shiva Temple/ Shri Sada Shiv Mandir, Dhaumyeshwar Mahadev Temple. This temple is dedicated to lord Shiva.In the Dhyunsar Mahadev Temple the lingam is in the form of Goddess Shri Parvati and Lord Shiva. During the kul-purohit (Family Priest) of Pandavas Sage Dhaumya came to this place he was attracted by the beautiful surroundings of this temple. He prayed to lord Shiva and penance to blessings him that whosoever will come and worship the god, his desires will be fulfilled.Maha Shivarathri festival is celebrated here while the lord Shiva is bathed with milk and butter milk. At thet time, the huge number of devotees will chanting “Om Namah Shivaye”.

Mata Chintpurni: The temple is believed to be founded by Pandit Mai Das, a Saraswat Brahman. He established this shrine of Mata Chintpurni in Chhaproh village twenty-six generations ago.It is a major pilgrimage center and one of the Shakti Peethas in India. The Chintpurni shakti peeth (Chhinnamastika shakti peeth) is located in Una district Himachal Pradesh state, surrounded by the western Himalaya in the north and east in the smaller Shiwalik (or Shivalik) range bordering the state of Punjab. The Chintpurni Shakti Peeth houses the temple of Chinnamastika Devi or Chinnamasta Devi. Chhinnamasta or Chinnamastika temple is one of the 7 major and 51 total Shakti Peethas.

All drivers are family friendly and well mannered.

All our taxis are Brand New airconditioned and clean. ( We do not switch off AC in Hills)

The rates of our Taxi Services to Jwalaji Devi are very very reasonable so that your pocket doesn’t get burned out. Prices range from only INR 3900 /- Per day basis. We can also charge on per KM basis for your utmost convenience.Our Rates are best in the Industry and are flexible as per your requirements.