Holiday travel India offers Buddhism Retreat Tour in Dharamshala, Which is one of the most fascinating hill station located in the upper hilly terrains of Kangra Valley of Himachal Pradesh, India. The mighty Dhauladhar Mountain Range in backdrop with dense pine & deodar forests give a very eye soothing view.  Dharamshala has become the epicenter of Buddhism in world, thanks to HH Dalai Lama & Tibetan Government in exile and is often known as "Little Lhasa in India". 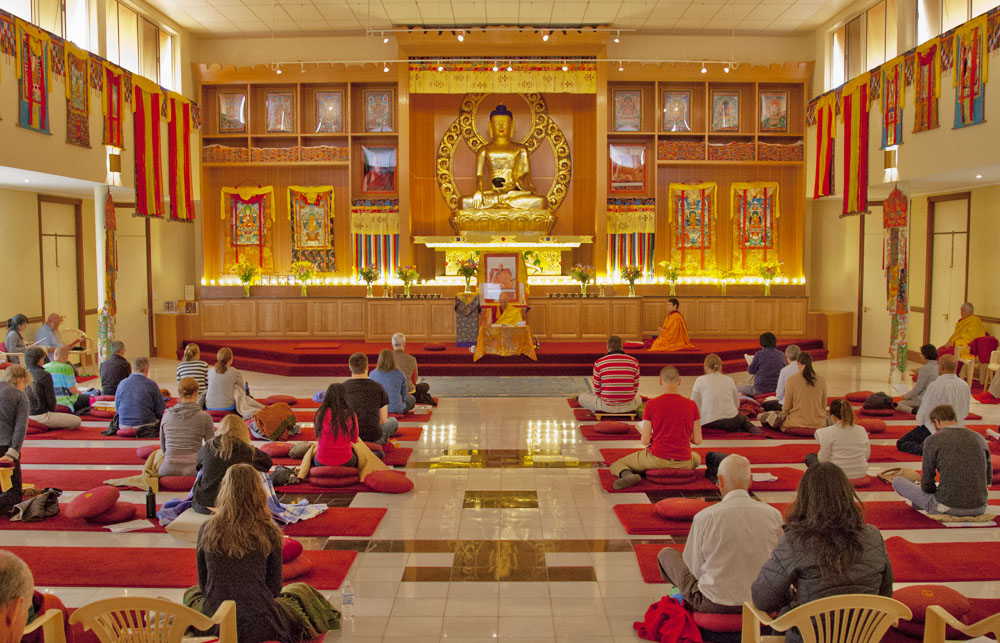 What is unique in “Discover Dharamshala Buddhism Tour” Package?

This worthwhile “Discover Dharamshala Buddhism Tour” Package is a 10 Days trip in which you will get a very unique chance to interact with The Colonial aura of Tibetan Buddhism Dalai Lama and Monks. The surrounding areas are as massive with snow capped peaks famous as Meditational Centre. There are world famous Tushita and Vipassana Meditation Center for the study and practice of Buddhism which is a heaven for peace and harmony.

On the hand you will visit Mcleodganj which is famous for their mighty Dhauladhar Ranges. This place is also popular for Buddha temples, gardens and Schools of Tibetan Studies. The above reasons are made this package is so unique and beneficial to all Indians and foreigners.

The Dharamsala is home to Tibetan government in exiles since 1960 & has become now an international Buddhist centre. Tibet was an autonomous kingdom ruled by the spiritual dynasty of the Dalai Lama until 1949, when the Chinese People’s Liberation Army invaded the country. Since then, more than 250,000 Tibetans have fled on foot over the Himalaya seeking asylum in India. There are over 200 monasteries and nunneries and over 20,000 monks and nuns. While Indian Buddhism was on its decline in India, Dharamshala has succeeded to revive it.. Today Dharamsala is a heaven for peace and harmony & home to several Buddhist temples and monasteries.

The Dalai Lama also fled Tibet and was granted asylum in Dharamsala in 1959. The headquarters of the Tibetan government in exile is located in the village of Gangchen Kyishong, a short walk below Mcleod Ganj, where a team of politicians continues to fight for the rights of those still being oppressed in Tibet.

Chance to meet Dalai Lama: While visiting Dharamshala, There are opportunities to meet the Dalai Lama face-to-face during your stay in Mcleod Ganj, but private audiences are rarely granted.?

Mighty Snow Capped Dhauladhars: To see the massive snow capped peaks of the Dhauladhar which rise like giant waves of frozen ocean giving a breathtaking view. Nowhere in world there are so high mountain ranges just rising above the plains dramatically. Dalai Lama of Tibet lives in Dharamshala and converted the place into Tibetan capital in Exile. School of Tibetan Studies has rare manuscripts and ancient texts.

Revisit The History: Town still lives in the era of colonial aura, Visit elegant cottages at Forsythganj and visit the St John Church where former viceroy to India, Lord Ilgin is buried. Transition from Colonial aura of Forsythganj to Mcleodganj is even more unique, where colonial aura is replaced with Bustling Tibetan Bazaars selling food, carpets and books.

Visit the Highest Cricket Ground with best view ever in the whole world.

Kangra Art Museum: Located at Kotwali Bazaar and you can see Kangra valley's arts, Crafts, Rich past displaying artefacts dating back to 5th century. It has gallery of Kangra's miniature paintings, Sculptors and photographs.

Kangra Fort: Emperor Akbar made many attempts to capture this fort but was not successful. The historic fort is maintained by Archeology dept of India. The Fort stands as a witness to Mahmud of Gazni to Emperor Jahangir. It is also known a purana kila and approachable by narrow road. The kangra Fort walls are impressive and visible from a long distance. the fort has temple inside. A must visit place for Tourists.

Prince Siddartha also known as Gautama Buddha was born a Hindu in the Kshatriya caste of warrior aristrocrats in approx. 563 BC-483 BC, in the Shakya clan's village of Kapilvastu in the foothills of the Himalayas.now known as 'Lumbini' in Nepal.

Siddartha married and had a son, but at age of 29, he left the Palace in search of salvation of the soul. After witnessing a dead body, old age person and a diseased beggar outside his Palace. He lead a life of an ascetic and wandered around in search for answers!! Around 528 BC he concentrated on meditation under a 'Bodhi Tree' in Bodhgaya and realised the 'Middle Path' which is the base of Dalai Lama's Tibetan Buddism in Dharamsala, India.

This 'Enlightenment' is called 'A State of Bodhi' and hence the name 'Buddha' or 'The Enlightened One' was given to him by his followers.

For the remaining 45 years of his life he travelled the Gangetic Plain of Central India teaching and founded the community of Buddhist Monks and Nuns. The Sangha to continue His spiritual teachings after his body had become one with the universe. Buddha died at Kushinagar, India at the age of 80. His last meal was 'sukara-maddava' and His last words were "All things which are made of parts eventually come apart. Be mindful and achieve Enlightenment!" The rituals of Tibetan Buddhism along with the concept of Universal Peace and Compassion have their roots in Buddha's Middle Path Philosophy.

Tibet's oldest spiritual tradition is Bon religion. 'Tonpa Shenrab', the founder of this religion, said to have been born in the mythical land of Olmo Lung Ring, renounced the world at the age of 30. Today, His Holiness the Dalai Lama in Dharamsala is the Head of Tibetan Buddhism and has stressed the importance of preserving the traditions of Bon religion as the indigenous source of ancient Tibetan culture.

The doctrine taught by Tonpa Shenrab is classified into two types. 'The Four Portals and One Treasury' and  ‘the Nine Ways of Bon.' The Nine ways of Bon is further synthesized into three: The first four as the 'Casual Ways', the second four as the 'Resultant Ways' and the ninth one as the 'Way of Great Completion!' These are all contained in the Bon Canon compromising more than 200 volumes under four sections. The 'Sutras', the 'Perfection of Wisdom', The 'Tantras' and last is 'Knowledge'.

The tradition of Nyinmapa Buddhism has its roots in the teachings of Guru Padmasambhava who came to Tibet in 817 C.E. at the invitation of King Trisong Deutsan to help propagate Tibetan Buddhism. He hid hundreds of treasures in the form of scriptures, images and ritual articles which he said would only be revealed at a certain time when his disciples were prepared mentally to understand and accept them. However the Tantra teachings he gave to his 25 principal disciples were acts of spiritual accomplishments. Namkhe Nyingpo, for travelling on beams of light, Khamdro Yeshe Tsogyal for reviving the dead, Vairochana for his intuition , Nanam Yeshe for soaring in the sky, Kawa Peltseg for reading others mind and Jnana Kumara for his miraculous powers.

The Kadampa tradition founded by Atisha was the inspirational source for the Gelug tradition of Tibetan Buddhism. It was founded by Je Tsongkhapa (1357-1419). He was born in Tsongkha region of Amdo province. At the age of seven he was given the name of Lobsang Drakpa and could recite by heart the texts of 'Expression of the Names of Manjushri.'

The Biggest centre of Buddhism outside Tibet is Tsuglagkhang Complex, the largest Tibetan temple outside Tibet, which has a large meditation hall containing some beautiful statues and thangkas, where you can meditate while listening to monks chanting from 6-8 a.m. and watch monks debate between 4-7 p.m.  The Tsuglagkhang is the monastery of the Dalai Lama and is located just in front of his residence.

Meeting Dalai Lama: While visiting Dharamshala, There are opportunities to meet the Dalai Lama face-to-face during your stay in Mcleod Ganj, but private audiences are rarely granted.

Many tourists come to Dharamshala to study Tibetan Mahayana Buddhism and Tibetan history.  In Mcleodganj, there is a world famous Tushita Meditation Centre for the study and practice of Buddhism Here teachings, meditations and practices based on the tradition of Lama Tsong Khapa of Tibet (the Gelugpa School of Tibetan Buddhism), are taught by Lama Thubten Yeshe and Lama Zopa Rinpoche.  The course offered covers Tibetan Buddhist philosophy and meditation from a modern perspective and apply ancient knowledge to increase peace, happiness, and compassion in your daily lives.

Meditation starts at 6AM in the meditation/learning hall, & students spend 45 minutes meditating.  Meditation is followed by breakfast that usually consisted of porridge, fruit, bread, peanut butter and chai.  The rest of the morning is normally spent in the meditation hall where following topics are covered:

Tushita Meditation Centre: Tushita offers 10-day Introduction to Buddhism/meditation retreats, 8-day non-residential courses, and programs for advanced students, all in the Tibetan Mahayana tradition. Silence is the norm most of the day, but discussion groups do take place after philosophy lessons. The price includes lodging, lessons, and three vegetarian meals a day.

Vipassana Meditation Center: This center, located in nearby Dharamkot, runs austere 10-day vipassana (mindfulness) meditation retreats, during which you must remain completely silent. The retreats, which run from May to November, are intense (up to 14 hour days), but no previous meditation experience is required, as you will be asked to set aside any practice while learning the vipassana technique. It is recommended that beginners attend a course like those offered by Tushita — a mix of meditation, philosophy, and discussions. The retreat is free, but donations are welcome.

Library of Tibetan Works and Archives

Located inside the government compound at Gangchen Kyishong downhill from Mcleod Ganj, this library hosts a number of Buddhist philosophy courses throughout the year. Most teaching is in Tibetan with an English interpreter. Most courses last from two to three months and cost Rs200, in addition to the Rs50 registration fee. The library also runs long-term Tibetan- and Hindi-language courses for beginners and advanced students for Rs250 per month plus a Rs50 registration fee.

Dalai Lama - Tibetan Govt. in Exile - TIPA: Mc Leodganj is the headquarters of the Tibetan government in exile and the residence of His Holiness the 14th Dalai Lama. The Buddha temple is situated opposite to the present abode of His Holiness, the Dalai Lama and is worth a visit. The Tibetan Institute of performing Arts (TIPA) is 1km. walk from McLeod Ganj and preserves a number of musical dance and theatrical traditions of Tibet. It is also known as ‘Little Lhasa in India’. Dal Lake is situated at a height of 1775m above sea level and is just 2kms from McLeodganj.

How to reach Dharamshala

Dharamsala can be approached by air from Delhi. The nearest airport is at Gaggal, 13 km away. Pathankot, the nearest broad gauge railway station is 85 km away, Una is 132 km and the toy train station is 17 km at Kangra. Buses for Dharamsala are available at both places. From Pathankot the drive takes about three hours or you can drive from Delhi (489 km) via Chandigarh, Kiratpur,Una,Amb,Bharwain,Kangra and takes about 10 hours.