Sakaleshpura is a small town located in Hassan district of Karnataka. It is situated 220 km from Bangalore which is lies in the Malnad region on the magnificent hills of the biodiversity hotspot, the Western Ghats. Sakaleshpur is famous for Manjarabad fort, Temple, Trekking spots and coffee estates. It is a hill station town surrounded with coffee, cardamom, pepper and areca plantations. This beautiful holiday destination is very popular for its fascinating mountains, scenic beauty and pleasant weather as well. Sakleshpur is a weekend getaway and a tremendous halt on the Bangalore. 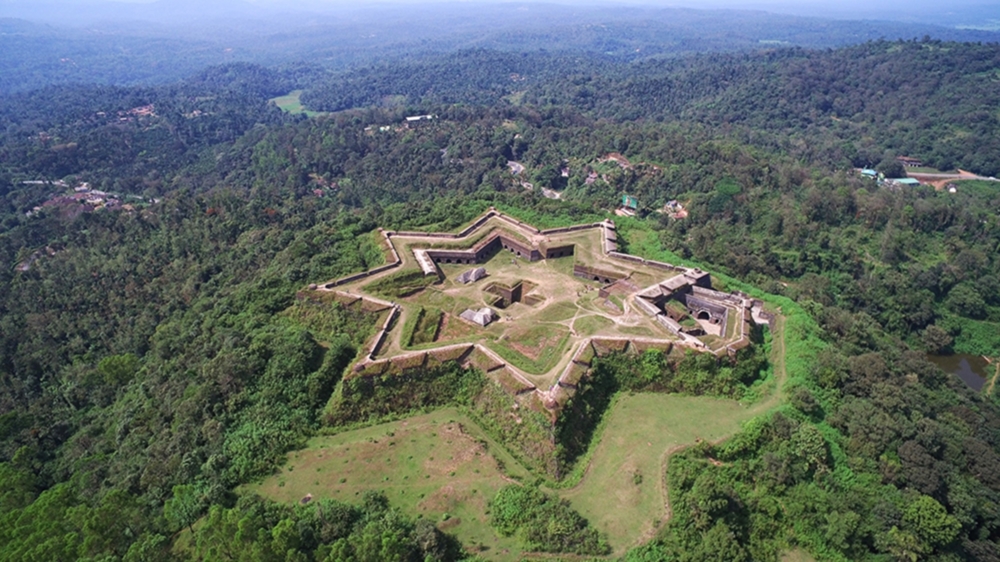 What is unique in Sakleshpur and Why?

Sakleshpur is known as noise and pollution free Hill station of Karnataka India. It is sandwiched between the famous coffee estates of Chikmaglur and Coorg in South India. It is rich in cardamom and pepper plantations.  From overall it is famous for trekking at hill ghats of Manjarabad fort and Hoysaleeshwara(Belur) temple.

After arrival at Bangalore airport or railway station you will proceed to Sakleshpur which is 221 km from Bangalore. After reach Sakleshpur, check in to hotel and  after that you will expand your day by visiting such famous places of Saklehpur which includes Manjarabad Fort and Kukke Subrahmanya Temple. By the evening come back to hotel and overnight stay with dinner at Sakleshwar Hotel.

After breakfast start the day by exploring the view and beauty of Sakleshpur with their sightseeing which includes Bisle Ghat, Sakleshwar Temple. After that you may have lunch at any nearest Restaurant, later you will visit Manjehalli Waterfalls. By the evening come back to hotel and overnight stay with dinner at Sakleshpur hotel.

Lunch: Served at any nearest Restaurant

Day 03: Departs from Sakleshpur to Bangalore

After breakfast, you will proceed for Bangalore and drop to Bangalore airport or railway station for onwards journey. Tour gets end with lots of memory.

There is some Nature stay is available to endulge in the real and natural beauty of atmosphere. Such famous and most awaited Resorts or Home stay is given below

Sakleshpur Resort provides a perfect home ambiance and personal attention while still sufficiently spread out to offer every guest their own space without interference.

The hilly region of this property gives one an elevated view of the nature surrounding the homestay.   It is well connected to the surrounding mountain ranges like Rottikallu, Jenukallu, Agani, Haalkola and Sishila betta.

How to Reach Sakleshpur from Bangalore

By Bus: Sakleshpur to Bangalore is 265 km away from each other. If you want to reach Sakleshpur from Bangalore then you can take bus/ Taxi.

By Train:  bangalore to sakleshpur train IRCTC runs train from Bangalore to Mangalore which passes through Sakaleshpur.

How to reach Bangalore

By Train: Bangalore railway station is located in the heart of the city. Various trains from all over India come to Bangalore.By Bus: People who decide to go on a Bangalore trip by bus can board at least a semi sleeper on any given day from major cities located nearby and it connect with various cities like Chennai, Ernakulum, Goa and Hyderabad these are nearest city who connect with Bangalore

Sakleshpur is less famous hill station of Karnataka state, Being a hill station, the weather is usually very pleasant and ranges around 22 – 23 degree Celsius throughout the year. The best time to visit Sakleshpur is preferably during the dry months of October to March.

Things to do in Sakleshpur

Sakleshpur is a fast growing tourist place from its very own marvelous nature and surrounding flora/fauna around in southern India. Sakleshpur is known for its high range hills and valleys sharing an important role in eco friendly and bio diversity nature in Western Ghats. It is famous for its adventure activity and Trekking at the Western Ghats.

Trekking is most important activity to perform in Sakleshpur, all the tourist attracts at the Murkannu Gudda And Hadlu Waterfalls Trek.

Places to visit in Sakleshpur

Manjarabad Fort: Manjarabad fort is a star fort built in 1792 by Tipu Sultan the then ruler of Mysore. The ruler of Mysore as a strategic defensive location, The fort served this use because it commands the approach to the plateau beyond Sakleshpur from the coast. Situated on a hillock, the fort is on one level, unlike other forts, which are multi-level.  Which offers a grand view of the Western Ghats, has cross-shaped pits, which are only source of water for this structure. Construction of this star-shaped fort was started in 1785 and concluded in 1792.

Bisle Ghat: Bisle is a small village in the heart of south-western India's Western Ghats. he forest is dense and deep and have lot of lush vegetation. Animals like leopard, chital, Gaur, Malabar giant squirrel etc can be spotted in the forest. There is a view point at Bisle known as the Bisle beauty spot. From Bisle Betta or Bisle Viewpoint, tourists can avail views of the surrounding mountain ranges.

Manjehalli Waterfalls: It is a beautiful waterfall in the state and is just 1 km from Manhehalli village. The water falls from a height of 20 feet and is a popular picnic spot.  Manjehalli waterfalls are alive only during monsoon and during summer and winter months, there is scarcely any water. Also, after 5.30 pm, the entry to the waterfalls is closed.

Bangalore is a interesting city where all the tourist visit to see gardens and beauty of Bangalore. There is such selected place which gives you perfect holiday in Bangalore as well as nearby Bangalore to enjoy weekend trip. There is such destination is given below for weekend Gateway near Bangalore

Coorg: Coorg, officially known as Kodagu, is the most affluent hill station in Karnataka. It is well known for its breathtakingly exotic scenery and lush greenery. Located amidst imposing mountains in Karnataka with a perpetually misty landscape, Coorg is the place to be for all nature love.

Mysore: Mysore s the second most populous and also the second largest city. The Kingdom of Mysore was served by the Wodeyar dynasty and in the late 18th century ruled by Hyder Ali and Tipu Sultan. Mysore is famous for its palaces, including the Mysore Palace, and for the festivities that take place during the Dasara festival when the city receives a large number of tourists.

Sakleshpur: Sakleshpur is a hill station town and headquarters of Sakleshapura Taluk in Hassan district in the Indian state of Karnataka.  It is listed at the 18th position as one of the most bio-diverse regions of the world. Because of its scenic beauty, Sakleshpur is also known as the ‘poor man’s beauty’, though in terms of flora, fauna and scenic spots.

Pattadakal (99 km):  Pattadakal, also spelled Pa??adakallu, is an UNESCO inscribed World Heritage site. It is a village and an important tourist centre in the state of Karnataka and is located on the left bank of the Malaprabha River in Bagalakote. Pattadakisuvolal'. Temples constructed here mark the blending of the Rekha, Nagara, Prasada and the Dravida Vimana styles of temple building.

Badami (101 km): Badami, formerly known as Vatapi, is a town and headquarters of a taluk by the same name, in the Bagalkot district of Karnataka, India.  Badami was known by the mythological name Vatapi. After the establishment of the Chalukya Empire in 500 AD, the Chalukya King Pulakeshi built a fort at Vatapi and made it the kingdom’s prized capital. The city is famous for its several archeological monuments that the Badami Chalukyas built. Most buildings exemplify the distinctive Dravidian architectural styles

Aihole (110 km): Aiho?e is a village having a historic temple complex in the Bagalkot district of Karnataka, India and located 510 km from Bangalore. It is known for Chalukyan architecture, with about 125 stone temples dating from 5th century CE, and is a popular tourist spot in north Karnataka. Aihole was once the capital of the Chalukya Dynasty, and is a city with a rich and illustrious history. It has great cultural significance as the cradle of Hindu temple architecture, and has more than 125 temples in and around it. Aihole is an archaeologists’ delight with several temples dating back to Chalukyan times. Most of the temples are located within 2-3 km radius while the important monuments are situated within a secured compound. Main temples are well preserved by archeology department and several other sites are still being renovated.

Kolhapur (158 km): Kolhapur is a Historic City in India. It is also known as historical capital of Maharashtra. It is the district headquarters of Kolhapur district. It is the land of magnificent temples, is the religious pride of Maharashtra. Nested in the tranquil laps of the Sahyadri mountain ranges, it is situated on the banks of the river Panchganga. Also termed as a city of palaces and gardens

Panhala (169 km): Panhala is a city and a Hill station Municipal Council (3177 feet above sea level) 18 km northwest of Kolhapur, in Kolhapur district in the Indian state of Maharashtra. Panhala is the smallest city in Maharashtra and being a Municipal Council the city is developing rapidly. The city sprawls in the Panhala fort commands a panoramic view of the valley below. There are innumerable places of interest, each with its share of haunting anecdotes. Sajja Kothi where Sambhaji was imprisoned. Ambabai Temple where Shivaji used to seek blessings before venturing on expeditions. Pavankhind where Baji Prabhu laid down his life to cover Shivaji's escape.