Nagarhole is famous tiger reserve which is located in Mysore district in Karnataka state and also known as Rajiv Gandhi National Park. Nagarhole National Park is at a distance of 255 km from Bangalore. It is counted among the well maintained national parks in India.  The total area of the park is about 643.39 Km2 and it was declared the 37th Project Tiger Reserve in 1999. Most of the tourist attracts to visit Nagarhole as a weekend trip from Bangalore, Mysore and Coonor. Tourist enjoys their day by take a boat ride and including Jungle safari. Package consists of all the possible facilities with perfect guideline in affordable price. 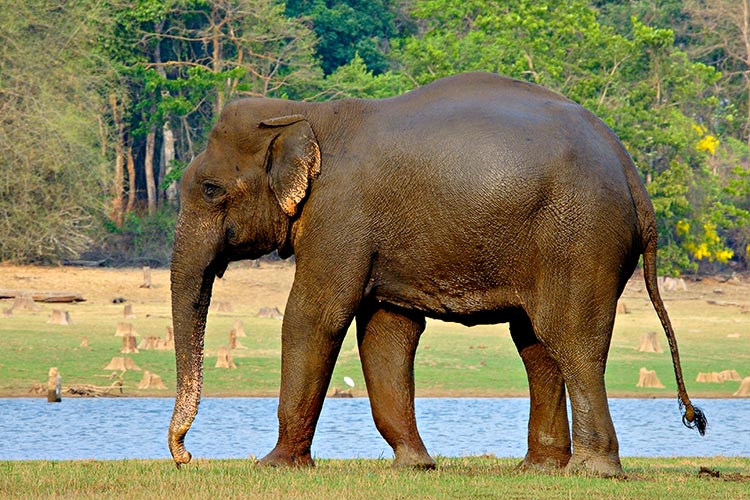 What is unique in Nagarhole National Park and Why?

Nagarhole National Park also known as Rajiv Gandhi National Park which is the enchanting 247 square-mile long wild reserve located in Kodagu and Mysore district of Karnataka. Nagarhole National Park is first national park in India which protects Bengal tiger and Indian leopard.  It comes in under consideration by the of UNESCO World Heritage site. The park has rich forest cover, small streams, hills, valleys and waterfalls. The park has a healthy predator-prey ratio, with many tigers, Indian bison and elephants.

Why you choose this Package

Nagarhole is famous and well known national park of Karnataka state. It is known as a springboard for further adventures. It also hosts a variety of animal species along with approximately 250 species of birds. On its northern confines is the Kabini River and on its southern fringes is the Bandipur national park. The park has rich forest cover, small streams, hills, valleys and waterfalls. In this package you will find 3 types of Jungle Safari which includes jeep Safari, Boat Safari and Elephant safari in affordable price.

Arrival at Bangalore airport or railway station and proceed to Nagarhole which is approx 255 km away from Bangalore. After reach Ganangooru village you may have lunch at any good Dhaba near Ganangooru village, later continue your journey towards Nagarhole which is 141 km is left from Ganangooru. Upon arrirval complete the check in formalities at the jungle resort and rest for some hours.

By the evening it's time to enjoy the serenity in Nagarhole by visiting Irpu Falls and Rameshwara Temple.  After visit such sightseeing come back to hotel and overnight stay with dinner at hotel

Early in the morning around 06:00 am get ready for our first Jungle Safari to spot the wildlife by Jeep Safari, Morning safari starts by 6:30 am onwards and end at 9:30 am. After safari come back to resort and have breakfast, after breakfast till lunch you have time to perform indoor activity in your resort.  After lunch get ready to visit evening elephant safari which starts by 3:30 pm and ends at 06:30 pm. By the evening come back to hotel and overnight stay with dinner at Nagarhole Resort

Early in the morning around 06:30 am visit for Boat Safari and enjoy your last day by performing safaris in the jungle to get closely acquainted with the flora and fauna of Nagarhole. Later come back to hotel for get ready and breakfast. After breakfast check out from hotel to proceed Bangalore for onwards journey. Tour gets end with lots of memory

Nagarhole National Park is a national park located in Kodagu district and Mysore district in Karnataka state in South India. Nagarhole National Park is counted among India’s best wildlife parks due to the large elephant and bison population. The park has been recently renamed as Rajiv Gandhi National Park after the late Prime Minister of India. It also hosts a variety of animal species along with approximately 250 species of birds. On its northern confines is the Kabini River and on its southern fringes is the Bandipur national park.  The park has rich forest cover, small streams, hills, valleys and waterfalls. The park has a healthy predator-prey ratio, with many tigers, Indian bison and elephants.

Nagarhole is the place where the safari experience can be felt with great surprises. With the presence of abundance of wildlife, this place brings tremendous crowd of wildlife lovers for sighting of elephants, sambhar, spotted deer, gaur, wild boar, sloth bear, wild dogs, etc. The possibility of spotting the animals is more during early mornings and evenings. Depend on the number of visitors, they operate a number of trips. Jeep Safari is one of the best ways to explore the rich flora and fauna of Nagarhole. You get to see some of the species found only in this part of the world. The floral beauty is definitely a visual treat to one’s eyes.

Boat Safari: While enjoying the boat safari, you will go upstream on the River Kabini from the resort and arrive at the area which divides the Bandipur and Nagarhole National Parks. Apart from witnessing many animals on the shore of the river, you can also witness the Marsh Crocodile and many other water birds.

National park is an area which is strictly reserved for the betterment of the wildlife & biodiversity, and where activities like developmental, forestry, poaching, hunting and grazing on cultivation are not permitted. There are some famous and listed National Parks found in Karanataka where tourist attracts to visit and extend their holiday which is given below.

Bangalore is known as IT Hub in Karnataka state where most of the tourist attracts to visit and enjoy their holiday in or near Bangalore. There is some famous Wildlife Sanctuary is located near Bangalore where number of tourist visit to give some break in their daily routine life as weekend holiday. Many foreigners visit to experience Safari and natural habitats. Some names of Wildlife Sanctuary is given below.

Places to visit in Nagarhole

The Irpu Falls: The Irupu Falls are located in the Brahmagiri Range n the Kodagu district of Karnataka, India. The Falls are also known as the Lakshmana Tirtha Falls, derived from the name of the tributary of Cauvery which starts from these falls, the Lakshmana Tirtha River. it is to be found in the Bhramagiri Range and is almost 60 m tall. Irupu falls is a foremost tourist draw as well as a pilgrimage location because of the Lakshmana-tirtha Falls.Monsoons are ideal to visit Iruppu Falls as it provides a great view of the gushing waters. The Rameshwara Temple is located near these falls.

Kabini Lake is another prime attraction situated 13 km outside the national park where the tourists can have the refreshing walk and some lucrative moments.

Note: Safari charges and Time may changed any time

How to Reach Nagarhole

By Flight: Bangalore is nearest airport which is connected with various domestic as well as international airports. You can hired Taxi, Cab to reach Nagahole from Bangalore

By Train: The adjoining railhead is in Mysore, approximately four hours away from Nagarhole by road. You can take Car/ Cab to reach Nagarhole from Bangalore.

Nagarhole is about 67 km away from Coorg (Kogadu) and it takes 1.5 Hours to reach. If you want to reach Nagarhole from Coorg then you have to hired cab or Taxi to reach in easy way and it charges became 3000/- by 4 seater.

Nagarhole national park is well-connected to several towns and cities of Karnataka state such as Bangalore and Mysore.