Ambubachi Mela is held every year at Kamakhya Temple, which is one of the oldest 52 shakti peethas of India. Here Shakti is worshipped in the  yoni  form. A natural spring keeps the stone moist. According to Kalika Purana each and every particle near Kamakhya is a Shakti Peeth. The Ambubachi Mela is celebrated in the capital city of Guwahati, in the northeastern state of Assam in India. The Ambubachi Mela is the most important festival of the Kamakhya Temple of Guwahati. The Ambubachi is a ritual of asceses observed with “Tantrik means”. It is believed that the presiding goddess of the temple, Devi Kamakhya, the Mother Shakti, goes through her annual cycle of menstruation during this time stretch. 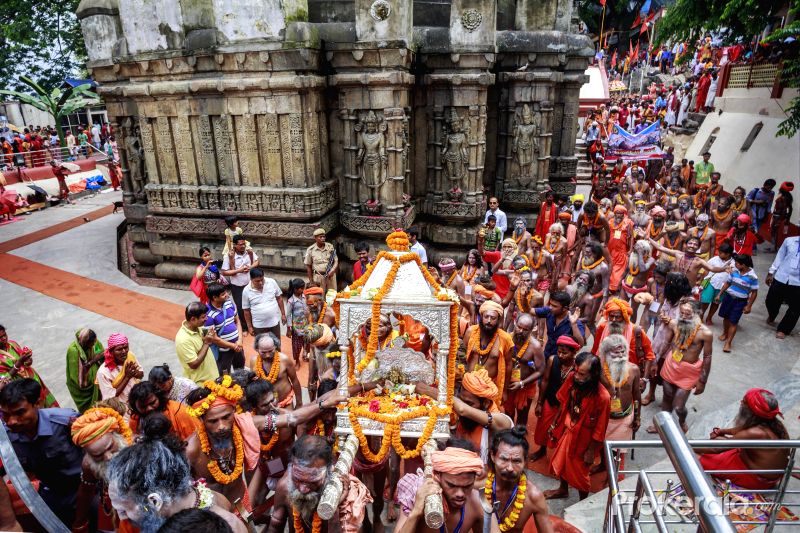 On arrival at the Guwhati airport / railway station from Mumbai/Delhi. And our representative will meet you and  pick you and proceed to hotel  check into the hotel.
After little rest, We proceed Visit the Goddess Maa Kamakhya Temple Shaktipeeth . It is a Hindu temple dedicated to the mother goddess Kamakhya, one of the oldest of the 51 Shakti Pithas, situated on the Nilachal Hill in western part of Guwahati city in Assam.
After some rest we visit local sightseeing of Guwahati like Balaji temple.Vasistha temple and  in evening visit the Brahmaputra river  you can take boat cruises (Direct Payment baisis) and enjoy spot river dolphins in the  Water .
Return to the hotel and overnight at Guwahati.

After Breakfast  Proceed to Full Day package for Ambubachi Mela Kamakhya Temple.
In the evening, proceed back to Guwahati
Dinner and Overnight stay at the Guwahati

Early morning after breakfast Check out from the hotel. Our cab drop to you Guwahati Airport /Railway station.

Why Ambubachi Mela is held

It is believed that Goddess Kamakhya goes through her menstrual cycle during the Ambubachi days every year during monsoon. During Ambubachi Mela the temple remains closed for first three days of the menstruation period. Devotees neither worship nor read holy books. Farmers also do not plough the land. Everywhere you hear chants of “Prithibi Rajashala Hoi” (Mother earth is menstruating).

After three days Maa Kamakhya is bathed and other rituals are performed.

On fourth day, temple doors are reopened and Prasad is distributed.

Lakhs of devotees visit to have glimpse and Pray to Maa Kamakhya. The Ambubachi festival is closely related to the Tantric cult and is also known as Kamkhya Devi Puja. Devotees come from far off places to meet the Tantric Sadhus.

Kamakhya Temple Shaktipeeth temple is located on Nilachal Hills in Guwahati city - India about 5 Kms from the city center. There are 51 shakti peethas in different parts of India, but The Kamakhya Shakti Peeth is considered as the most powerful shakti peeth, as yoni  of Goddess Sati had fallen on the Neelanchal parvat i.e. the Nilgiri hills. This Shaktipeeth is considered as the center point of creating the whole Brahma.

Kamakhya is the main temple, dedicated to Kamakhya, in a temple complex, there are individual temples dedicated to the Ten Devis Bhuvaneshvari, Bagalamukhi, Chinnamasta, Tripura Sundari, Tara, Kali, Bhairavi, Dhumavati, Matangi and Kamala Among these, Tripurasundari, Matangi and Kamala reside inside the main temple whereas the other seven reside in individual temples. It is an important pilgrimage destination for general Hindu and especially for Tantric worshipers.

Uma Nanda Temple: Umananda Devaloi is a Shiva temple located at the Peacock Island in the middle of river Brahmaputra just opposite the office of the Deputy Commissioner of Kamrup or the Kachari Ghat in Guwahati.

Temples of Hajo: Hajo is an ancient pilgrimage center for three religions: Hindus, Buddhists, and Muslims. It lies on the banks of the Brahmaputra River, 24 km from the city of Guwahati in the Kamrup district of Assam, India. The area is dotted with a number of ancient temples as well as other sacred artifacts. The Hayagriva Madhava Mandir is the most famous temple of Hajo.

Urra Tara Temple: This is one of the most powerful Shaktitemples in the world and only few people know it. The sanctum sanatorium has a large body of water which never dries out and has always been what it is. By the way, name of the temple is 'Uggra Tara' meaning 'angry goddess Tara' and not Urra Tara.

Bhuvaneswari Temple: It’s at the top of Nilanchal hill, walking distance from kamakhya temple. Experience the divine feeling there. You can experience the amazing view from the top... the mighty Brahmaputra river flowing, Guwahati city and the lush green valley. The view is just stunning, with cool breeze and calm environment.

Sukreswar Temple: The Sukreswar Temple is an important Shiva temple in the state of Assam in India and was constructed in 1744 by Ahom King Pramatta Singha. The temple is located on the Sukreswar or Itakhuli hill on the south bank of river Brahmaputra in the Panbazar locality of Guwahati city.

Vashistha Temple: Basistha temple, located in the south-east corner of Guwahati city is a Shiva mandir constructed by Ahom King Rajeswar Singha in 1764 along with gift of land 835 Bighas for the ashram. The history of the Basistha Ashram where the temple is located dates back to the Vedic age. According to legend the ashram was founded by the great saint Basistha (Vasishtha).

Janardana Temple: This is a beautiful temple of Lord Buddha. The environment is lush green and quite serene. The temple is near the Brahmaputra River which makes the whole place even more beautiful.

Ugro Tara Temple: Ugro Tara Temple is a temple dedicated to Tara located in the western side of Jor Pukhury tanks in the heart of Guwahati city in the Lotaxil locality in Northeast India. Legend has it that the navel of Sati, first consort of Shiva, is related to this temple. Ugratara in Assam is generally identified with Tiksna-Kanta, Eka-Jata, etc., of the Buddhist pantheon.