Himachal is the land of God and Goddess.Himachal Pradesh has some of the most important Hindu pilgrimage sites and hindu temples. This Tour Covers 4 holy Temples Chintpurni Devi, Jwala Ji, kangra Devi, Banglamukhi and Chamunda ji. Holidaytravel.co is one of the best travel agency which provides services at reasonable cost. This package is specialy designed to cover 4 Devi Darshan + Hill Station Site Seeing + Sikh Takhts at Amritsar & Anandpur sahib. The package Amritsar Airport/Railway Station, After Visiting Golden temple, Jalianwala Bagh, Wagah Border, We proceed to Himchal 5 famous Devi Darshan Tour as well as famous Hill stations of Dalhousie, Dharamshala and Mcleodganj. Finally we visit famous Sikh Khalsa City of Anandpur Sahib enroute to Chandigarh.
This package starts from Amritsar/pathankot and terminates in Chandigarh 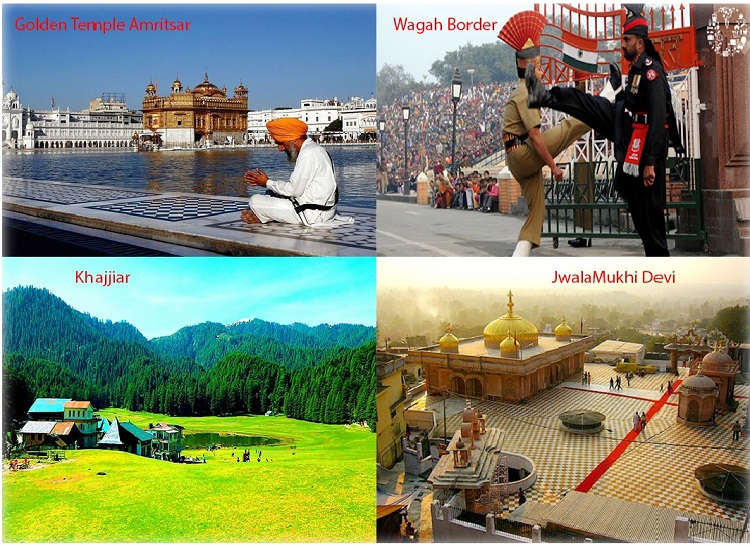 Top Highlights Of The Tour

After Breakfast, Check out and proceed to Himachal hill station Dalhousie via Pathankot. Pathankot is located at just 1.5 hours from Amritsar, We will have lunch break at Pathankot Dhaba Scenic Hill Journey starts from pathankot and after 4 to 5 hours journey we reach Dalhousie. Check in to hotel and overnight stay at hotel.

Dalhousie
Dalhousie, one of the favourite among most tourists travelling to Himanchal Pradesh is famously known for its mesmerizing natural beauty and its old world charm. This hill station was one of the most favourite summer destinations of the ruling Britishers and this is truly reflected in the majestic Victorian style mansions in this region. Situated far from the buzzing cities in the country, this quaint town transports you to a pollution-free environment in the lap of nature. Dalhousie is known for its scenic beauty has a number mountains and river streams that tourists must visit. Among them the most famous are Panch Pulla, Satdhara Falls and the Daikund peak.

About Kunal pathari Temple - Dharamshala
Kunal Pathari Temple is situated in Dharamsala in Kangra district of Himachal Pradesh India.It is a most popular temple in Dharamshala.Dharamshla is the famous tourist place in himachal pradesh India. Kunal Pathri Temple is related to a legend dating back to centuries. Located near the beautiful tea gardens, Kunal Pathari Temple offers good view of the Dhauladhar Range. Because of high altitude, Kunal Pathari area greets the visitors with refreshing winds. It is a very ideal place for having a memorable walk and the blessings of the mother goddess. Site Seeing includes IPL Cricket Stadium, St John Church in Wilderness, Dal Lake, Dalai Lama temple, Bhagsu Nag etc

Baglamukhi Devi Darshan
Baglamukhi Devi is located right on road and as of 2016-2017, there is a huge complex built at baglamukhi temple.Balgamukhi temple is veru famous for Tantra and seeking victory over enemies and opponents. many top Politicians regularly visit Mata Baglamukhi Devi temple. Spend 1 hour at Baglamukhi devi Complex and Proceed to maa Jwala mukhi Devi located at 20 kms away.

Jwalamukhi Devi Darshan
Jwalamukhi devi is famous shaktipeeth temple and also known as Flaming Goddess. At Jwalamukhi Temple, you will have darshans of Goddess in the form of Holy Flames, The sanctum Sanctorum has about 7 flames which are burning from eternity, the source of these flames is natural gas which is coming from deep core of the earth, Many scientific studies and explorations have been carried out resulting in no gas deposites, hence these flames are still a mystery.
In Jwalamukhi temple complex, also visit the Gold Chatra presented by Emperor Akbar, which is blackend, as Mata ji did not accept Akbar's Gift.

Next Morning after fresh up, Have Morning Darshan of Mata Chintpurni Ji and poceed to Mata naina Devi Ji Via Amb, Chauki Maniyar, raipur Madan & Bhakra. Enroute see the scenic Beauty of Govindsagar Dam along with the route and shivalik hills. Have stops at Bhakra dam enroute, It takes normally 2.5 hours to reach Naina devi Ji from Chintpurni

Naina Devi Darshan
Reach Roapway platform by 11:00 AM and catch the Roap way to mata naina devi, The temple of mata naina devi ji is located on the High Hill and Roapway takes approx 20 minutes to reach temple top. From the cable car of the roapway, magestic views of Gobind Sagar Dam waters , Submerged forests, as well as green shivalik hills is enchanting. Reach Mata naina Devi temple and you need to climb at least 50 stairs along with Bazaar to reach temple. Have Darshans of Mata Naina Devi and enjoy the views of the plains. After Mata Naina Devi darshan, catch the Roapway back to Bhakra Side & proceed to Una Hiamchal

Jallian Wala Bagh: Jallianwala Bagh is the site of one of the most monstrous massacres in human history and a dark event during the Indian independence struggle. Also known as Amritsar massacre, as many as 1100 peaceful protesters were killed when British troops opened fire on April 13, 1919 at this place. The brutal murder of thousands added fuel to the fight against the British and raised severe questions about the British intentions to rule India in a humane way. Today, the park has been converted into a memorial who sacrificed their lives.

Maharaja Ranjeet Singh Museum: Dedicated to Maharaja Ranjit Singh, ‘the Lion of Punjab’, who freed a major part of Punjab from the shackles of the Mughals, the Maharaja Ranjit Singh Museum is located in Lawrence Road, Company Bagh of Amritsar. The museum displays the chivalric activities of the Maharaja along with artefacts associated with the greatest battles he fought with his enemies. The light and sound show creates the feel of a real war situation with the booming sound-effects taking you to the past.

Chmera Lake: The Chamera Lake, located in Chamba District, is a popular tourist spot of Himachal Pradesh. Located at a distance of 25 km from Dalhousie, at an altitude of 1700 m, Chamera Lake is a reservoir formed by the Chamera Dam. Being a major source of water supply for the villages surrounding the lake and continuously fed by the Ravi River, the water levels in the lake ranges at an average of 750 m.

St, Francis Church: St. Francis Church, located on the Subhash Chowk is one of the prominent monuments of Dalhousie. The money required for the construction of this church was attributed by army officers as well as civilian. Constructed in 1894, this church is being maintained and managed by the Catholic Diocese of Jalandhar. The major attractions of this church include beautiful glass work along with intricate stone work. In addition, the church conducts services on Sundays that are attended by several people. Built in accordance to a famous Church of England, the St Francis Church has the architectural style that bears the old British type of architecture.

Satdhara Falls: Satdhara Falls, located on the way to Panchpula is one of the most popular sightseeing attractions of Dalhousie. Perched at an altitude of 2036 m above sea level, the place has derived its name from the seven beautiful springs. It is believed that these springs have several therapeutic values. This is because water in these springs comprises mica, which is known as 'Gandhak' in local language. The mica has several medicinal properties, which helps in curing many diseases and ailments

The Tibet Oral History Project (TOHP) aims to preserve the history and culture of the Tibetan people. As advised by His Holiness the Dalai Lama, we record the life experiences of Tibetan elders who were forced to flee their homeland following the Chinese invasion.

The main attraction of Naddi is the mind blowing sunset. After a daylong sightseeing in Mcleodganj , you should visit Naddi to experience the sunset , you have never ever seen before. Naddi has Dhauladhar ranges on the back and is located at the edge of hill. You can see the view of whole Kangra valley and the largest artificial lake i.e Pong dam lake from here. Most of the time clouds are present over Naddi. These are the reasons that you get to see one of the most beautiful sun set in the world. You get a very clear view of the sun setting , and spreading its rays through the clouds over the snow lushed mountains.

Dalai Lama Temple:theone of the holy place in dharmshla is Dalai Lama Temple. The temple complex is kept open from sunrise to sunset for the visitors to explore the peaceful ambiance of the surroundings. During the morning hours visitors can participate in the prayers as the monks chant and meditate. You can join local residents for a meditative walk around the temple/monastery complex.

Guru Ka Langar The tradition of serving langar Initiated by Guru Nanak Dev Ji and then established by the 3rd Guru Sri Guru Amar Dass Ji at Goindwal.
Even the Mughal King Akbar came and sat among the ordinary people to share langar. The institution of Guru ka Langar has served the community in many ways. It has ensured the participation of women and children in a task of service for mankind. Women play an important role in the preparation of meals, and the children help in serving food to the pangat. Langar also teaches the etiquette of sitting and eating in a community situation, which has played a great part in upholding the virtue of sameness of all human beings; providing a welcome, secure and protected sanctuary.
Everyone is welcome to share the Langar; no one is turned away. Each week a family or several families volunteer to provide and prepare the Langar. This is very generous, as there may be several hundred people to feed, and caterers are not allowed. All the preparation, the cooking and the washing-up is done by volunteers and or by voluntary helpers (Sewadars).

The Golden Temple Amritsar India (Sri Harimandir Sahib Amritsar) is not only a central religious place of the Sikhs, but also a symbol of human brotherhood and equality. Everybody, irrespective of cast, creed or race can seek spiritual solace and religious fulfilment without any hindrance. It also represents the distinct identity, glory and heritage of the Sikhs. To pen-down the philosophy, ideology, the inner and outer beauty, as well as the historical legacy of Sri Harimandir Sahib is a momentous task. It is a matter of experience rather than a of description.

Amritsar is located at a distance of 230 km from Chandigarh. Considered as one of the most sacred city of India and popular for the Golden Temple, Amritsar is well connected to Chandigarh by road and rail. However, the best way to reach Amritsar from Chandigarh is by road, which takes around 4 hours. The places covered during the journey from Chandigarh to Amritsar are Chandigarh - 17 km -> Kharar - 20 km -> Rupnagar - 61 km -> Banga - 43 km -> Jalandhar - 50 km -> Rayya - 43 km
Amritsar. On the way, there are several rest stops, hotels and dhabas. Options range from Lucky Vaishno Dhaba to Haveli and Magicland. Petrol pumps such as AH Padam Petroleum and HP Petrol Pump are also available at regular intervals.

Dalai Lama:- Dalai Lama Temple:theone of the holy place in dharmshla is Dalai Lama Temple. The temple complex is kept open from sunrise to sunset for the visitors to explore the peaceful ambiance of the surroundings. During the morning hours visitors can participate in the prayers as the monks chant and meditate. You can join local residents for a meditative walk around the temple/monastery complex.

Transport options from Chandigarh to Amritsar

By Car: Hire a cab or rent a car to drive down to Amritsar which takes around 4 hours. Approximate cost of cab per kilometer ranges between INR 8 to 21, depending upon the type of vehicle. Travelling by a cab or car is ideal for families with senior citizens and kids or while in a group.